The new Nissan Ariya e-4ORCE boosts the EV's power to 302bhp, but it comes at a cost

The Ariya e-4ORCE, as the name suggests, adds four-wheel-drive grip (and a fair few quid) to one of our favourite electric cars. As well as even better straight line performance, it actually rides slightly better than two-wheel-drive Ariyas, but that wouldn’t be enough to make us switch our allegiance from the brilliant and cheaper models in the line-up.

We like the Nissan Ariya. So much so that it currently lays claim to our Car of the Year title. We love the way it drives, its quality feeling, its style, its space – in fact there’s not much we don’t like about it. And now the range is expanding – upwards – with the arrival of the four-wheel drive e-4ORCE model which, in top Evolve trim, gets a price tag not far from £60,000.

Electric car buyers seem to be less invested in badge snobbery, and more turned on by style and tech, so Nissan hopes the Ariya’s many positives can attract buyers who would only previously have thought about spending that amount of cash on a Nissan if it wore a GT-R badge.

You won’t be buying the e-4ORCE for its sportiness, though. Although a zero to 62mph time of 5.7 seconds is swift by any standards – and the Ariya has the usual, instant shove in the back performance of many an EV – this range-topper doesn’t feel any sharper to drive than the standard car.

It’s got the same relaxed and slightly artificial steering as lesser models – not a problem for us – while the weight gains of the extra motor on the rear axle and bigger 87 kWh battery do little to reduce body roll if you do feel like upping the pace through a corner. 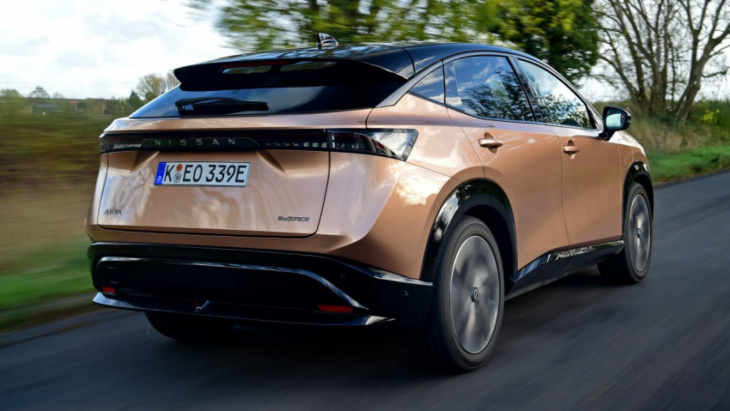 So, this Ariya is no sports car (the Sport mode doesn’t make much difference, either), nor is it an off-roader. The four-wheel drive system is there to provide a bit of added security on slippery roads – handy on the wet leaf-strewn roads of our test route, especially if you do want to take advantage of the performance on offer. The same excellent e-Pedal system as on other Ariyas means you can enjoy one pedal driving, too, if you want.

That extra weight does seem to make a bit of a difference to the ride, though. The Ariya has always been firm riding, but the e-4ORCE seems marginally more comfortable than the two-wheel-drive models, in spite of its big 20-inch wheels.

It all adds up to being a comfortable cruiser – especially if the 300+ mile range is to be achievable. Things are quiet, the seats are comfortable and the view forward – through a Tesla-style deep windscreen – is great.

The Ariya’s tall, coupé-like shape means rearward visibility isn’t so generous, but you do get a digital rear-view mirror that displays a widescreen rearward view from a camera at the back rather than the letterbox look you get if you switch back to just using the mirror.

There are other star features inside this Evolve trim Ariya including a powered central storage unit that slides back and forth, and power for a secret compartment in the centre of the dash, alongside a traditional glovebox. 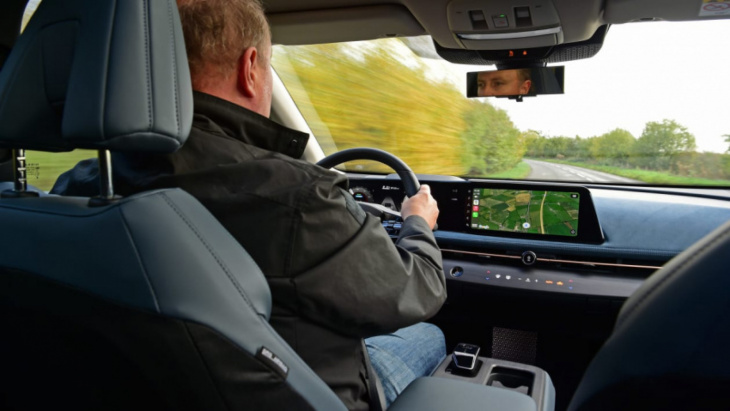 A digital dash display sits ahead of the driver, although this model gets a head-up display, too, while a responsive infotainment screen is present and correct.

Nissan has opted for separate heating and ventilation controls on the dash, but in a case of style over substance they’re touch sensitive pads rather than traditional buttons – we’d much prefer the latter to make sure you know you’ve actually adjusted the temperature.

The rest of the interior design is much more successful – minimalist, but with a few unique design features such as the Japanese criss-cross patterning on the doors and in the centre of the full-width footwell, all tastefully lit at night.

That flat floor really does give a feeling of spaciousness in the front and the back, where access is good and there’s plenty of head and kneeroom.

So all that we like about the Ariya is present and correct and, if you don’t want to go the whole hog with Evolve trim, you can save yourself nearly £4,000 for the slightly less plush and lower tech e-4ORCE Advance.

But much as we like the Ariya, unless that extra grip is really necessary where you drive, the e-4ORCE isn’t the sweet spot of the range. We’d stick with two-wheel-drive and let you decide on the battery size depending on the range you need.

How affordable is the Nissan Leaf in Florida? What determines the affordability threshold? Why would the Nissan Leaf be so expensive for Florida residents? Nissan has one of the cheapest electric vehicles on the market, the Leaf. But, if you break down affordability by state, you’ll find that Florida ...


View more: Owning a Nissan Leaf in Florida Is Way More Expensive Than It Used To Be

Does Nissan have a small pickup truck? The 2023 Nissan Frontier is old-school How expensive is the 2023 Frontier? Which mid-size truck is best? In terms of finding a mid-size truck, you likely want something that is reliable. And while every vehicle will have its issues, some have better ...


View more: The 2023 Nissan Frontier Might Be the Most Reliable Mid-Size Truck

It will be revealed on February 1 (or February 2 if you are in Europe).

Recent sales data for Nissan in the United States Why the sales figures might not paint the truest picture What will Nissan have to do to rebound with its market share in the United States? There are plenty of foreign automakers that do incredibly well in the North American ...


View more: Has Nissan Peaked in the United States?