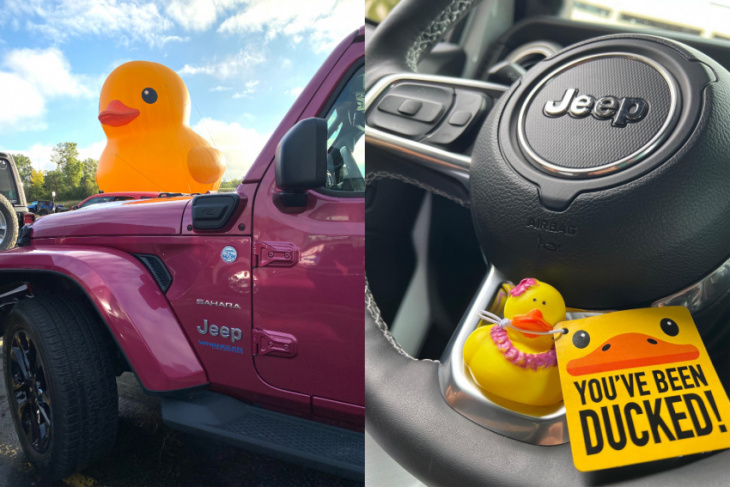 The world’s largest duck and a Jeep Wrangler | Stellantis

Jeep drivers have some interesting quirks. There’s the Jeep Wave, which is where Jeep drivers wave at other people in Jeep SUVs. Another one of those little traditions is the process of “ducking” other Jeeps. Drivers leave a duck on the windshield with a note to say hello.

It gets better, though. Stellantis says Jeep is bringing out a big duck for the North American International Auto Show. People can visit Huntington Place Square to see the world’s largest duck and take photos with it. Jeep will also hand out rubber ducks to the first few people there (while supplies last).

This year, Jeep was named the most patriotic brand for the 20th year in a row. To say that it hasn’t inspired some cool things would be amiss. Now you can add Jeep-inspired ice cream to the list. Detroit-based Milk & Froth Ice Cream will also be at Huntington Place Square handing out Jeep brand-inspired ice cream. You can catch the ice cream from Friday, September 16, until Sunday, September 18. Milk & Froth came up with three “dessert-rated” flavors: Snazzberry, Electric Lemon Custard, and Trail Tracks.

The Detroit Auto Show at Huntington Place and Hart Plaza are indoor/outdoor this year for the first time. Jeep says the duck will be on display through the entire auto show. If you snap a pic with him, you can post photos across social media channels with the hashtag #duckduckJeep.

Stellantis says Camp Jeep and Ram Truck Territory are two of the indoor test tracks debuting at the Detroit Auto Show. Drivers can take a Jeep around the test track and try out some of the off-road features you might not get a chance to use.

The track will have a 23’ tall mountain with 45-degree approach and departure angles. Some of the courses include the Ground Clearance Stair Climber, Maneuverability Moguls, Extreme Break-over, and the Jeep Tunnel Pass-Thru.

In addition, Jeep will have seven different vehicles on display and giving rides. These include the Jeep Wrangler Rubicon, 4xe, 392, plus the Jeep Gladiator Rubicon and Mojave. A Grand Cherokee Trailhawk 4xe and some other Cherokee options will be there.


View more: The Best Used Jeep Cherokee SUV Years: Models to Hunt for and 1 to Avoid