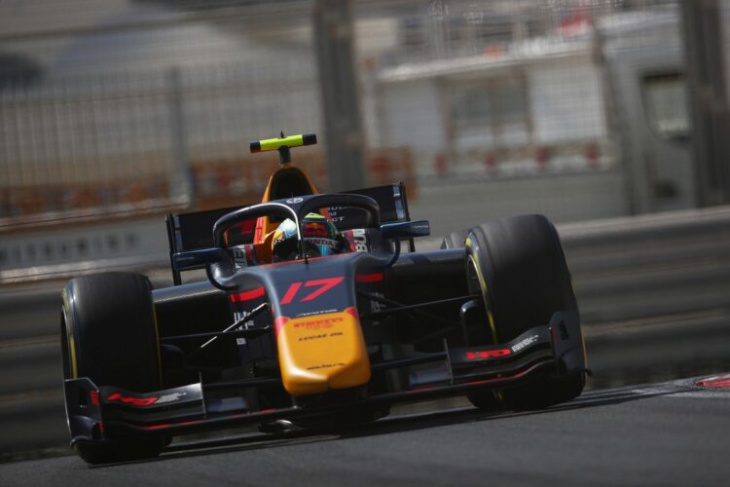 Ayumu Iwasa has taken his second pole position of the season after a superb qualifying session for DAMS which saw both their drivers qualify on the front row for Sunday’s Feature Race in Abu Dhabi.

With the French team locking out the first two positions, Theo Pourchaire and Felipe Drugovich will be hot on their heels when they start directly behind them in third and fourth respectively.

Jack Doohan will start alongside Logan Sargeant in fifth and sixth, with the American driver needing a strong haul of points to achieve his dream of joining the Williams F1 Team for the 2023 season.

Doohan set the early benchmark before his Virtuosi Racing team-mate Marino Sato found himself facing the barriers in sector 3, bringing out an early Red Flag after seven minutes of running.

When the session got back underway, the drivers battled to topple the Australian’s top time with Pourchaire joining him on the front row ahead of the PREMA duo of Jehan Daruvala and Dennis Hauger.

On the second round of flying laps, Pourchaire managed to get himself onto provisional pole position as Logan Sargeant put himself alongside the Frenchman in second.

The 2022 champion Felipe Drugovich improved to second ahead of the 2023 Williams hopeful Sargeant who dropped down to fourth after Doohan jumped up to third.

The DAMS duo of Iwasa and Nissany put in superb final laps to take a one-two for the French racing outfit.

In his first Formula 2 race weekend, the 2022 Formula 3 runner-up Zane Maloney qualified in 19th and effectively ended the session after bringing out a late Red Flag with less than a minute on the clock.

Juan Manuel Correa also competed in his first Formula 2 qualifying sessions since the tragic events of the 2019 F2 Spa round. The American driver finished in 18th.

Keyword: Iwasa completes front-row lockout for DAMS ahead of Nissany