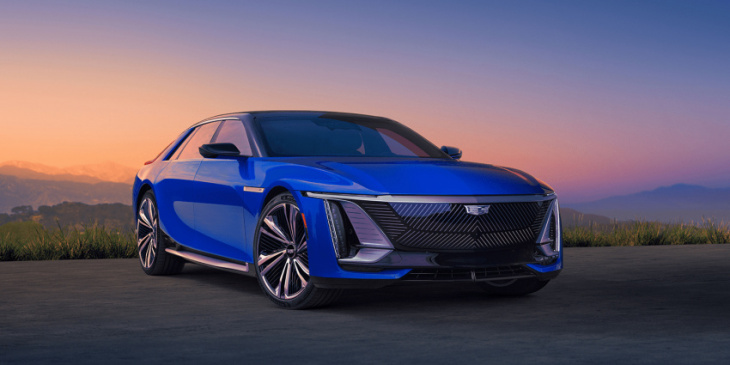 General Motors has announced the launch of more than 15 electric models based on its Ultium platform in China by 2025. Following the already available Cadillac Lyriq electric SUV, GM is planning a broad range of Ultium-based models across brands, segments and body styles for the Chinese market.

In addition to the Lyriq, which has been delivered to customers in China since September, this will include the second electric Cadillac model, Celestiq, as well as the first Ultium-based Buick model. This is the Buick Electra E5, for which the first pictures and information were recently published in a registration application at the Chinese Ministry of Industry and Information Technology. The model is to be officially presented at the end of this year and delivered from the first half of 2023.

Buick is also planning a second electric car with Ultium drive for 2023, but no further details are known about this model yet. With the FNR-XE Concept, GM also presented a preview of the Chevrolet brand’s first electric sedan. The study is supposed to give a “preview of Chevrolet’s new generation of intelligently connected electric vehicles”, which have been developed specifically for the Chinese market. This includes making the vehicles more software-defined “to meet customers’ evolving needs for a digital lifestyle”, as GM puts it in the release.

GM plans to introduce a platform for such software-defined vehicles in North America and China next year. This platform is to make it possible to offer “frequent and seamless updates of apps and services over the air”. In this way, the US company wants to ensure that customers and users have access to the “most innovative experiences and technologies”.

“GM is accelerating the introduction of Ultium-empowered EVs in China to support the market’s move toward an all-electric future,” said Julian Blissett, GM executive vice president and president of GM China. “Through global collaboration and local integration, we are unlocking a transformative experience with real-world benefits for our customers through zero-emission driving.”

The model offensive has been developed towards GM’s global vision of “zero accidents, zero emissions and zero congestion”, according to the GM China Tech Day 2022 announcement in Shanghai. As a result, the 15 electric models will also be made “more connected and smarter”.

“With our disruptive technologies coming to life, we are seeing the most profound and immense transformation ever in the automotive industry,” said Mary Barra, GM’s chief executive. “GM is determined to lead the transformation and ultimately create a better, safer and more sustainable world for our customers and generations to come.”

Keyword: GM to launch EV offensive in China by 2025

BMW plans electric sedan and SUV for the ‘Neue Klasse’

Mini rumoured to be considering cooperation with Canoo

BMW introduces entry-level i4 eDrive35 in the USA

Rivian to cut 6% of workforce

Refactory Flins: Renault skills up for the circular economy

Hyundai has selected the iDM146 integrated drive module from BorgWarner to power another electric model in the A-segment. The start of production is planned for the third quarter of 2024. This is the Korean manufacturer’s second order for the iDM146. Hyundai Motor Group had already ordered said electric drive ...

Xpeng is now accepting reservations for its fourth model, the G9, in its home country. In connection with the pre-sales launch in China, Xpeng also gives more technical details of the model, which was also designed for international markets from the very beginning. The G9 – or more precisely, ...

MG Motor opens for pre-orders of the MG4

Pre-orders for the MG4 Electric are now open across Europe. According to the manufacturer, the first 1,000 reservations of the MG4 Electric that lead to binding purchases are guaranteed to be delivered before the end of 2022. At the end of June, the SAIC brand gave more details about ...


View more: MG Motor opens for pre-orders of the MG4

According to industry insiders, BYD has started supplying LFP cells to Tesla – specifically to the plant in Germany. The first batch of Tesla Model Ys equipped with BYD’s ‘Blade’ batteries are expected to roll off the assembly line in Grünheide in a month at the earliest. For the ...


View more: Tesla to use BYD batteries in German gigafactory

Volkswagen to introduce the ID. 3, 4 and 5 range in Australia

Volkswagen Australia is preparing to introduce a range of new electric cars, according to a report from Drive. The ID.4 and ID.5 will be introduced in Australia at the end of next year, followed by the ID.3 in 2024. After Volkswagen recently launched production of the ID.4 in the ...


View more: Volkswagen to introduce the ID. 3, 4 and 5 range in Australia

Mercedes-Benz has released the SUV offshoot of the all-electric EQS for sale, with prices in Germany starting at €110,658. The EQS SUV can now be ordered in three drive variants, and the first vehicles are expected to reach European customers this December. As announced at the model’s launch, the ...

Tata plans to take over Ford factory in India

Aiways is releasing the U6 in China with 3 battery options

Tesla is planning another factory in the USA

BYD is expanding to Israel

Elon Musk now holds only 15 per cent of Tesla

Skoda updates the Enyaq iV in the UK

Quantum Solutions starts production of the FOMM ONE EV in Thailand

Volkswagen kicks off production of the ID.4 in the USA

Sono Motors presents the final series design of the Sion

BYD plans to hit the Japanese market with 3 BEVs

Porsche updates the software across all Taycan models

Volkswagen is reorganizing management in the USA

Porsche confirms launch delay of the Macan until 2024

Chevrolet presents the serial version of the Blazer EV

Genesis reveals prices and specs for the GV70

Mercedes rumoured to drop the EQC in 2023