The highest-performance Ford Bronco 4WD has been revealed in full overnight as a love letter to high performance off-road driving – and it wears Raptor badges.

This new Raptor is the most powerful Bronco variant to ever be made by Ford, which specialises in building high-performance products such as the Mustang Shelby GT500, a range of ST products and the F-150 and Ranger Raptor.

What makes the Bronco Raptor so tough?

All grades of the Ford Bronco are capable of off-road driving, but the mission with the Bronco Raptor was to give it more aggressive capabilities off the beaten track. That meant significant alterations to the chassis, suspension and running gear. 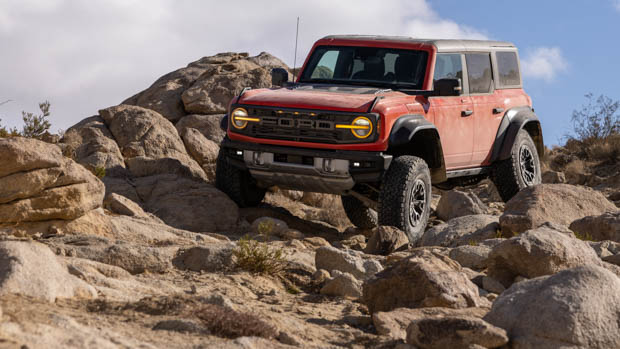 The Bronco Raptor is built upon a high strength steel frame with new shock towers to increase wheel travel and off-road durability. Heavy duty bash plates and skid plates protect vital parts of the Bronco’s running gear including the engine, transmission and transfer case. Reinforcement of the upper body, C-pillar and B-pillar cross bar have contributed to a 50 percent greater torsional rigidity than the standard Bronco.

Performance axles used on the Bronco DR race truck have been fitted to the new Raptor, which have increased the front and rear track by 218mm. Ground clearance has been lifted to now be 332mm, which is 121mm more than the standard Bronco.

The 4×4 system has been also improved and now includes three modes with a higher-capacity clutch to withstand high performance driving. 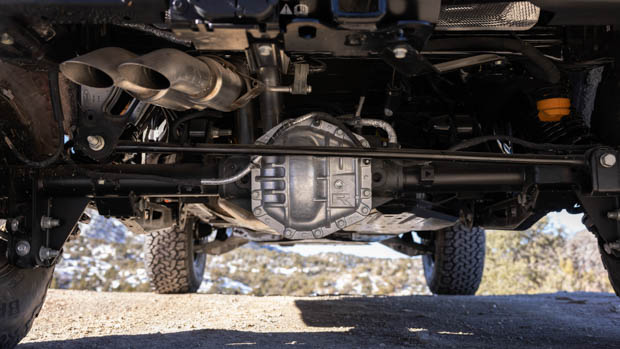 Much like the Australian Ranger Raptor, suspension has been provided by FOX, who have provided internal bypass semi-active dampers to the front and rear of the vehicle. Ford Performance front and rear control arms have been fitted to provide maximum wheel travel of 330mm at the front and 355mm at the rear, which are increases of 60 and 40 percent respectively over the standard Bronco.

BF Goodrich has supplied 37-inch all-terrain tyres, the largest of any production SUV in America according to Ford.

Known coloquially as the “big Bronco” in the US, to differentiate it from its Escape-based Bronco Sport midsize SUV sibling, Ford’s off-roader has been repeatedly ruled out for Australia. 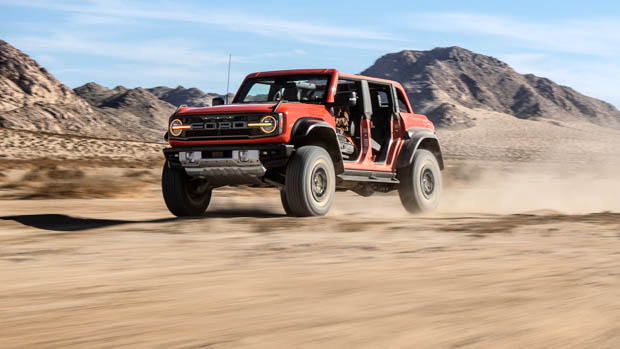 In its place, Australia will soon receive a new-generation Everest wagon based on the T6.2 Ranger ute.

It is possible that Ford will push through an Everest Raptor with a new twin-turbo petrol V6 expected to do service under the bonnet of the second-generation Ranger Raptor.

At the heart of the Ford Bronco Raptor is a twin-turbocharged Ecoboost V6 petrol engine. While a specific output has not been confirmed by Ford, the company says it is targeting “more than 400hp” for the Raptor. That translates to a healthy 298kW of power in the metric system.

The engine in the Bronco Raptor is a twin-turbocharged 3.0-litre V6

The iron-block engine will be paired to a 10-speed automatic transmission, while a dual mode exhaust system has been developed to incorporate active-valve technology. Four exhaust modes will be available including normal, sport, quiet and baja. Sounds good to us, then!

For the Ford Bronco Raptor, there are seven selectable driver modes including a unique baja mode which activates turbo anti-lag calibration for performance over high performance desert runs. A tow mode is also available, along with trail control, trail turn assist and trail one-pedal driving modes to assist when off-road.

Ford wanted the Ford Bronco Raptor to be “the most badass Bronco yet” and to do so, the team spent plenty of time perfecting the interior and exterior of this serious off-road machine. 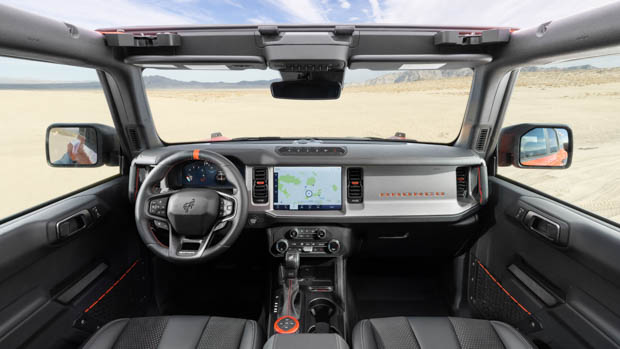 All around the car, body panels have been changed or upgraded, including the front and rear quarter panels, fenders and fender flares.

Inside the cabin, the Bronco Raptor features a heritage-inspired horizontal dash which integrates a 12-inch digital driver cluster. The cluster can be arranged in several views for the driver including a Performance view that shows gear readings, tachometer and customisation of gauges. 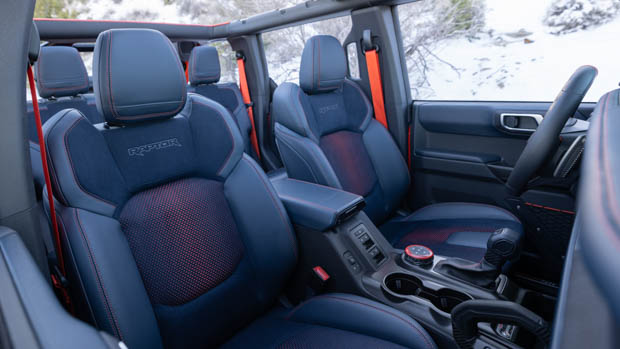 Cloth seats are a good choice for dirty off road work

For infotainment, the Bronco Raptor will come standard with a 12-inch touchscreen running Ford’s SYNC4 software. Other standard technologies include a 360-degree camera, while a Lux package can be optioned that includes a 10-speaker B&0 sounds system and adaptive cruise control.

Customers in the US can begin to place orders for the Bronco Raptor in March, with the first vehicles arriving for the American summer.

Well-heeled Australians who would love to park a Bronco Raptor in their driveway won’t find it at Ford dealerships, but it is possible that a private importer may choose to convert them for our shores, as with the standard Bronco – albeit at a hefty charge.