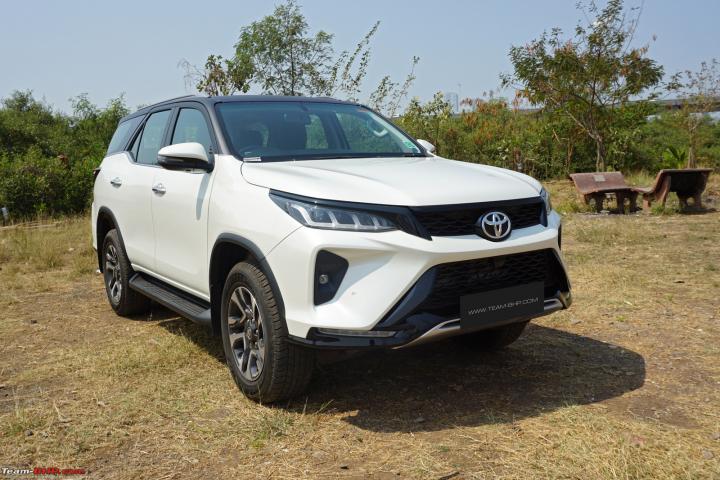 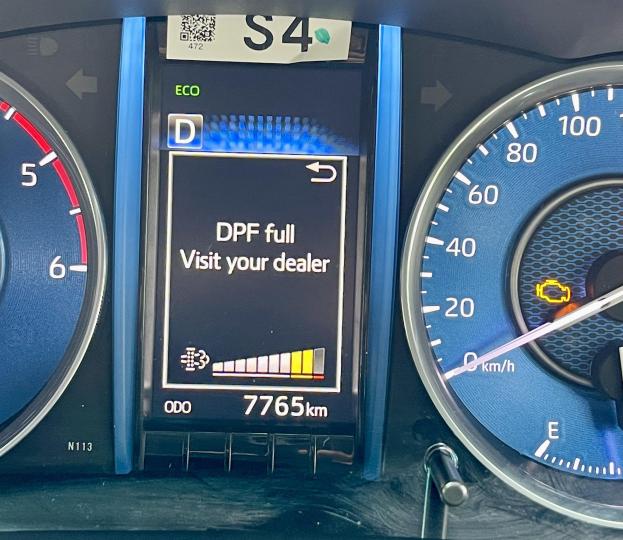 The AC cooling reduced and the car jerked on every upshift.

BHPian t2k4 recently shared this with other enthusiasts.

Got the DPF Full, visit dealer warning on my Fortuner 4×2 Diesel. 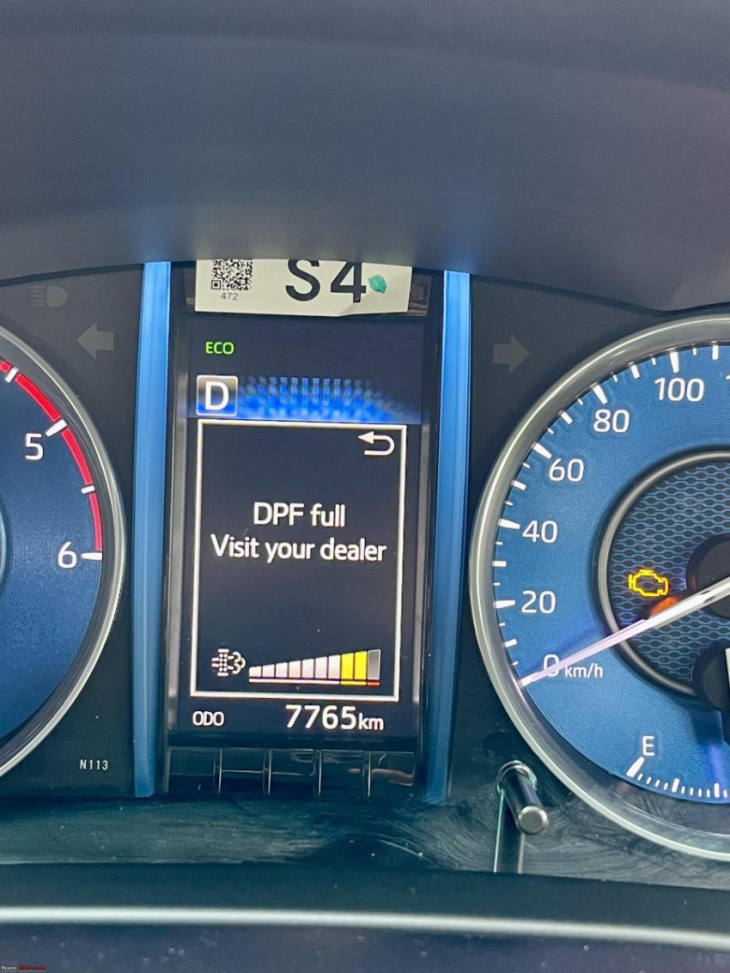 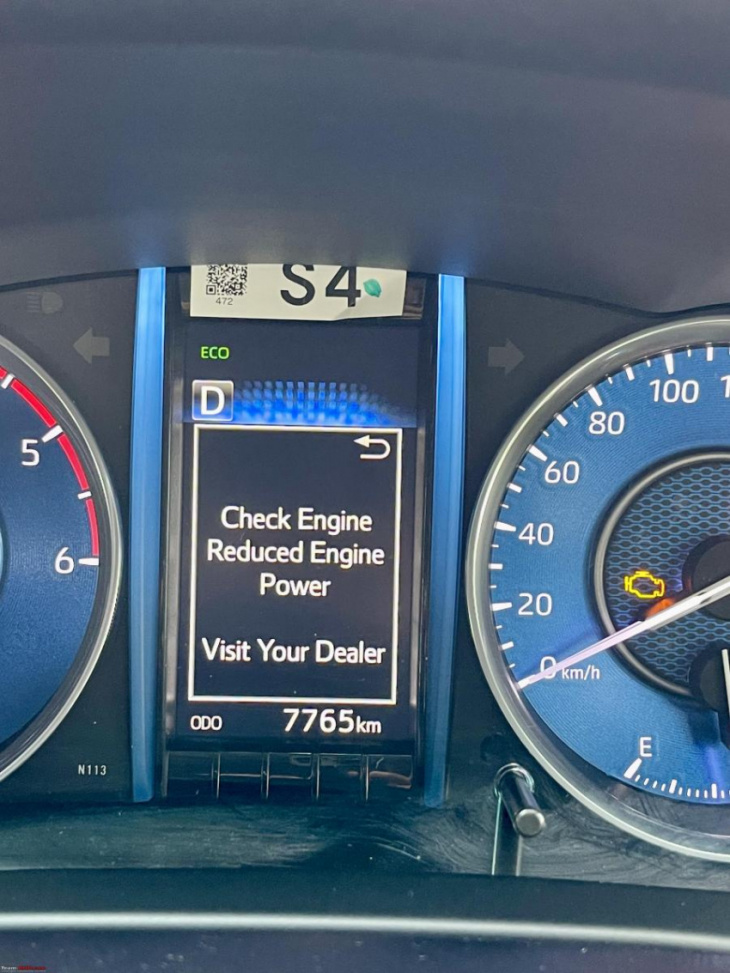 The SUV has completed 7,700-odd KMs till date, has had the first service last month and got the AdBlue refill at 7K.

The error popped up on the console as I was driving in the city. The last auto DPF cleanup had happened a week or so ago and at no point had I ignored an auto cleanup or interrupted it. In fact, I make it a point to never turn the engine off when an auto cleanup is in progress.

When the error appeared, I decided to take the SUV to the nearest service center. There’s another one in neighboring town but a little further off and given that as soon as this error appeared on the console, the following also happened:

I opted for the closest center.

On reaching the service center, I wasn’t sure if I should turn off the ignition of if the car would have trouble restarting but since I was at the center, felt it was okay to turn it off as there was no one manning the service center driveway and on asking a person wearing a black Toyota t-shirt (possibly a sales person), I was told to turn the car off and go see an advisor.

It wasn’t too crowded and there were three service personnel manning three stations, all wanted to look busy. One of them was sipping tea and all three ignored me.

I roamed around and found another advisor walking about and showed him the photos I took of the error message. He put me in touch with a technician who was solving a similar problem for Innova Crysta at the service center, and informed me that he’d take care of my car next.

After he was done with Innova, the technician found me in the customer lobby and we walked toward the Fortuner discussing the issue. He plugged his computer into the OBD and ran the diagnostic and initiated the manual regen process.

He said I had driven 7K+ before this happened and that was good. He’d seen many cases where people had trouble in the first 2-3K. He mentioned driving slow in the cities and in the hills are the main contributors. To my surprise, he shared information on how many Innovas he has seen this problem with, mainly taxis which go to the hills and after the solo trip, the DPF is clogged.

It took 20-odd minutes for the DPF cleanup. He showed me a video on his mobile, an education video on DPF produced by Toyota.

I watched the video and thanked him for his help.

Then, I had to arrange a gate pass to exit the service center.

Found the same advisor who had guided me to the technician.

He printed one for me and wanted me to fill service feedback form. I didn’t want to fill one due to paucity of time and the bad experience with the advisors (they would have tossed out the negative feedback one anyway so why waste time). The technician had done everything right and was nice, it is the Advisors who need help & counseling. They are the face & experience of the service center.

Long story short, he made me scribble my initials on a blank feedback form and I was out of there. Hopefully, I will also receive a WhatsApp link in the next few days, one generated by Toyota’s automated systems and I can provide ground-situation feedback.

Toyota’s famed service is a myth. No such thing. They are no better or worse than any other brand’s service center. It’s a hit or miss with the Advisor you find. In fact, at the first service visit, I was surprised to notice that in their estimate, they don’t make it a point to tell you how many optional things are slapped in there. You have to read the fine print to take an informed decision.

Are Toyota cars more reliable? Not sure yet. You could blame DPF and BS6 rules on the fate of diesel cars, but Toyota could still differentiate itself as a brand by writing to all BS6 Fortuner owners on what to expect with DPF issues and steps to take if something happens.

Keyword: DPF warning on my 2021 Fortuner & a below average service experience

Lawyer explains why Najib is still travelling in a Volvo XC90, Toyota Fortuner, but not a prison van

Fuel Your Way To A Brand-New Toyota Fortuner With Caltex

Replacing my Skoda Yeti with a Toyota Fortuner: Which engine to get?

Bought a clean 2016 Fortuner 2WD AT: My 2nd car from Toyota UTrust

The ride quality felt far better than the Fortuner and the Hyryder absorbs bumps like a champ. BHPian tjsi recently shared this with other enthusiasts. Took a test drive of the V Hybrid variant today. The Honda City is my daily, but today I drove to the showroom in ...

Toyota Fortuner GR Sport Modified Into A Beast By Hamer

A well-maintained used Fortuner costs around Rs. 27-30L. BHPian PetroNerd recently shared this with other enthusiasts. I’m in the market for a new or used car and am confused between the Mahindra Scorpio-n and the used Toyota Fortuner. A well maintained Fortuner is around 27-30L. Here’s what GTO had ...

There are no surprises now as UMW Toyota Motor (UMWT) had revealed images of the new Toyota Veloz when it announced the acceptance of bookings. Thus far, its dealers had received about 5,200 bookings for the Veloz 7-seater MPV which is pending an official launch. “The team at UMW ...

Off-roading in the Western ghats with my Toyota Fortuner

Jeep Meridian vs Fortuner Legender : Head-to-head in an owner comparo

Car under Rs 80 lakh for a college student: Fortuner, Thar or M340i

4 Premium SUVs That Are Cheaper Than Toyota Fortuner GR-S

A Ford Endeavour owner shares his thoughts on the Toyota Fortuner

Booked Mahindra XUV700: Rethinking my decision for a Toyota Fortuner

2023 Toyota Fortuner could get a diesel mild-hybrid

A Toyota Fortuner owner checks out the Jeep Meridian