Serialized production slots are now available, which you can secure through a deposit. 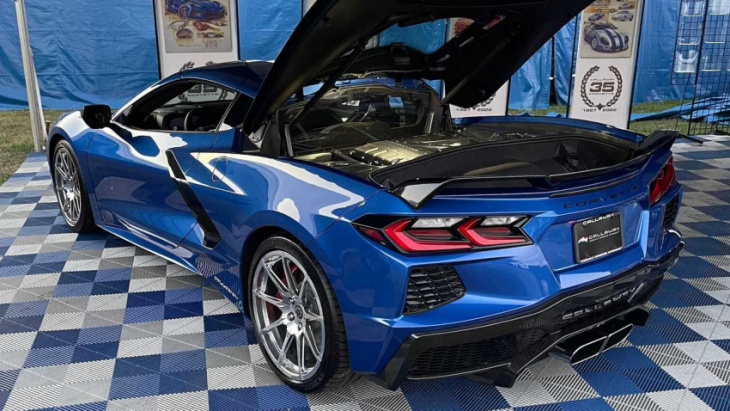 Callaway Cars isn’t a stranger to GM vehicles and to the Corvette nameplate. In fact, the two have been in a relationship since 1987 when the Connecticut-based company introduced the first Regular Production Option (RPO) B2K twin-turbo Corvette.

The commemorate those long 35 years, Callaway Cars announced that the extension of its supercharged vehicle line to the Corvette C8. This is different from the Callaway Corvette 35th Anniversary Edition that was introduced in March, which came with a carbon-fiber body kit, exhaust, and other upgrades.

Yes, the tuner is developing a supercharged Chevy Corvette Stingray, with a prototype to be previewed to the attendees of Corvettes at Carlisle on August 25-28, 2022.

According to the release, the mid-engine Corvette will be equipped with a TripleCooled Supercharger System configured for the LT2 V8. It will still undergo final engineering, emissions compliance testing, and performance validation, which will happen in the upcoming months. Production is slated to happen early in 2023.

Callaway Cars opens the upgrade to all LT2-equipped Corvette Stingrays. Serialized production slots are now available at Callaway’s Connecticut and California facilities, which can be secured by putting down a $1,000 deposit. Through Callaway’s 2nd Chance program, even in-service 2020-2023 Stingrays are also eligible for conversion.

As with the numbers, Callaway Cars hasn’t released any information yet since the project is still under development. Performance, pricing, and optional equipment are to be announced when testing and validation are complete.

Just like any Callaway Cars product, the Supercharged Corvette C8 Stingray comes with a three-year or 36,000-mile powertrain warranty supplementing the vehicle’s factory warranty. There’s also an optional five-year or 60,000-mile Callaway Powertrain Service Contract, with services that can be performed at GM dealers.