The Dodge Demon is a record-breaking evolutionary step for American muscle cars. It brought stratospheric drag strip performance to a road-going Challenger, outrunning the likes of the fastest SRT Hellcats and Shelby GT500s with ease. However, the National Hot Rod Association (NHRA) soon banned the screaming, brutish Dodge Demon and its crate from official competition until just recently. Here’s a little about why the Dodge halo car had to vacate the drag strip.

Why did the NHRA ban the Dodge Demon?

The NHRA banned the SRT Demon because it was too fast. Yes, you read that right. The NHRA claims that any street car participating in races requires a special competition license and a roll cage if they’re too fast. Specifically, the NHRA once banned vehicles that sprint the quarter mile faster than 10 seconds or achieve a trap speed of 135 mph or greater. 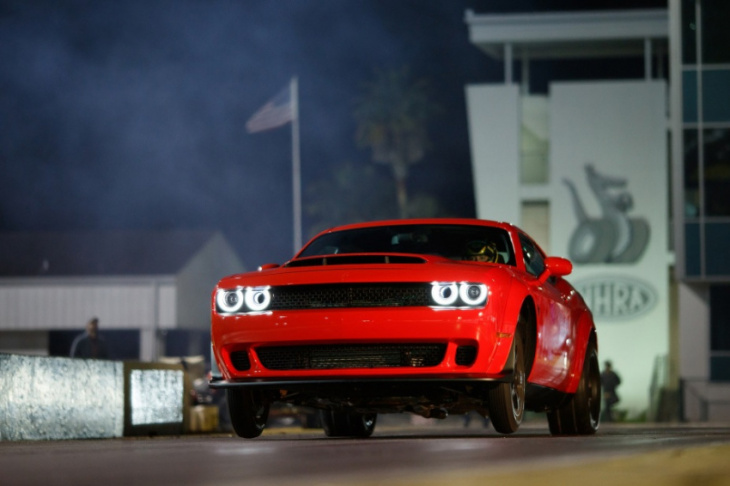 The Dodge Demon, incidentally, became the fastest accelerating ICE road car in the world at the time of its release. It ran a quarter mile in 9.65 seconds with a trap speed of 140 mph. As a result, the NHRA banned it, and Dodge’s subsequent press release flaunted the ban. Jalopnik says that the marque claimed the Dodge Demon was “too fast for the drag strip.”

Is the Dodge Demon still banned on the track?

The Demon is not banned anymore. Instead of keeping your trap speed and time under the NHRA’s rules, the NHRA has a compromise. If you hook up your crate equipment correctly and smash a sub-10-second quarter mile, the NHRA acknowledges that cars can do that now. According to Muscle Cars and Trucks, performance road cars from 2014 and newer can run 9.0-second quarter miles with a 150-mph trap speed without penalization.

Is a Dodge Demon street legal?

The Dodge Demon isn’t just free of its NHRA ban as of 2022; it’s also street legal. Dodge designed the Mopar muscle car to run fast quarter-mile times and then drive home comfortably with air conditioning. However, to get the best performance out of your Demon, you’ll have to use everything in the 1$ crate. The crate contained skinny drag tires, an ECU, and a high-performance air filter, to name a few.

Once the Demon had all that equipment on board, it could run the quarter mile well under 10 seconds and hit 60 mph in just 2.3 seconds. Better yet, if you break the 10-second barrier with your Demon, you’ll receive a special sticker from the NHRA. Not too bad for an agency that banned the Dodge Demon until recently. 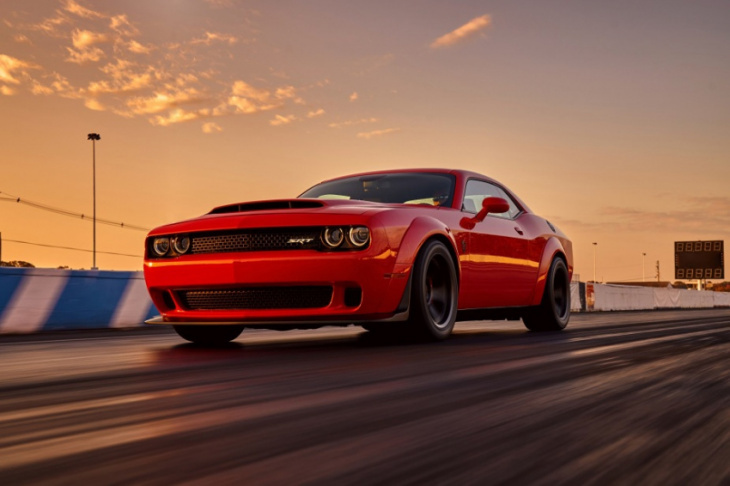 Will there ever be another SRT Demon?

Given Dodge’s special relationship with the car shoppers who bought SRT Demons, it’s unlikely that the marque will ever make another one. Dodge only produced 3,300 of the venerable Mopar muscle car, and it would likely enrage owners if they brought the name back anytime soon. Don’t fret; Dodge promised a record-breaking Challenger to finish the vehicle’s gas-powered tenure following the in-progress Last Call models.

Scroll down to the following article to read more about Mopar muscle cars!

Keyword: Why Did The NHRA Ban the Dodge Demon?

1. More seating inside the Dodge Durango 2. The Durango has more horsepower and torque 3. More payload and towing capacity than the Nissan Murano 4. More maximum cargo space in the Durango 5. More ground clearance Most SUVs look similar, but a few that automakers try to make ...


View more: 5 Advantages the 2022 Dodge Durango Has Over the Nissan Murano

The 1973 Charger SE that we have here, however, appears to check many essential boxes though. Let’s start with the obvious and state this Charger has clearly seen better days throughout its life. But when it comes to seeing the actual light of day, it’s worth saying from the ...

First and foremost, let’s state the obvious and say this 1970 Dodge Charger still looks good, though there’s something you should know about the paint. eBay seller nickypotata, who is currently the second owner of the car, says the Charger received a fresh paint job in 1981. It already ...

It’s all about simplicity.

1. Inexpensive price 2. Better fuel economy ratings 3. Less curb weight The market is saturated with SUVs of all types, from off-roaders, like the Toyota 4 Runner, to luxury SUVs, like the Porsche Macan. But, there is another category. The Premium SUV category offers a combination of unique ...


View more: 3 Advantages the 2023 Nissan Murano Has Over the Dodge Durango

Some think this is the notorious blackout Charger… As we’ve covered before, Arkansas State Police are quite good at chasing down suspects who are in far more powerful cars. Troopers seem to be rather methodical, well-trained, and simply outdrive suspects who get overconfident as they see the red and blue ...

This is just too comedic… The final “Last Call” Dodge Challenger, the one which is supposed to be the crown jewel of the lineup, has been pushed back thanks to supply chain problems. If any car news story typifies 2022, it’s this. With component shortages, namely for computer chips, automotive ...