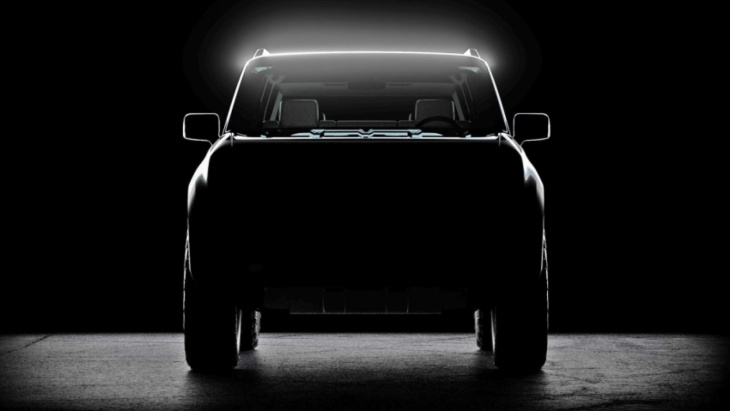 Scout is a new US brand from Volkswagen and it’ll focus primarily on electric off-road vehicles and pick-up trucks. We’ve seen sketches of upcoming models but now the firm has released an official teaser of its first concept car.

The image shows the all-electric SUV’s front end and, just like the previous design sketch, we can see a boxy outline with a squared-off bonnet, chunky off-road tyres and plenty of ground clearance. The teaser is shown on Scout’s new website where, notably, the name “Volkswagen” is completely absent.

The firm has commented on the teaser saying it “shows the Scout concept sporting a strong stance and upright posture reminiscent of classic Scout models”. Previous design sketches show the pick-up and SUV will share similar designs, with both receiving a bluff nose, simple and clean surfacing and a raised window line towards the rear. The absence of a traditional powertrain has enabled very short overhangs, with the exception of the pick-up which has an extended load bay to the rear.

The Scout nameplate featured on a series of off-roaders built by now-defunct American firm International Harvester until 1980. The new electric models wearing the badge are set to launch in the US initially, although availability in other markets isn’t out of the question. Volkswagen obtained naming rights for the Scout brand last year.

The Scout models will not feature Volkswagen’s MEB electric architecture, which underpins the brand’s electric ID range. Instead the Scout range will use what bosses term as a ‘new technical platform concept’ for off-road EVs.

The Scout lineup will be designed purely for the US market, where the pick-up truck could potentially start for $40,000, undercutting rivals like the Ford F-150 Lightning and Chevrolet Silverado EV.

GM, Rivian and Hummer have also entered the electric pick up market in America and Volkswagen boss Herbert Diess seems keen to take a slice of the lucrative segment. “Electrification provides a historic opportunity to now enter the highly attractive pick-up and R-SUV segment as a Group, underscoring our ambition to become a relevant player in the U.S. market.”

Volkswagen says prototypes are set to be unveiled next year, while the first production-ready Scout vehicles will arrive in 2026. There will also be a $100 million investment to kick start the new brand. The plans form part of Volkswagen’s wider goal to double its EV market share in the US and become the world’s biggest-selling electric vehicle manufacturer by 2025.