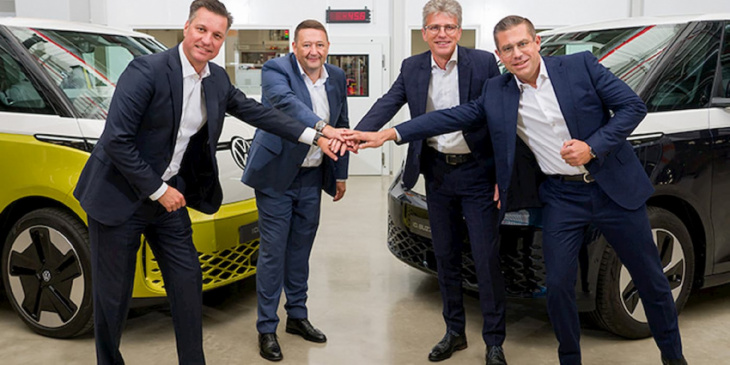 Volkswagen’s new battery company, PowerCo, announced Monday that it would be forming a joint venture with Umicore to produce battery materials for around 2.2 million EVs. The new joint venture is a significant milestone, establishing one of the first fully integrated auto supply chains as VW looks to ramp up EV sales.

PowerCo is a 100% owned subsidiary of Volkswagen that was established in July 2022 to handle the automaker’s global battery operations. Volkswagen and PowerCo began construction on its battery plant in Salzgitter, Germany, in July – the first of six planned.

As demand for electric vehicles continues soaring in all major auto markets (US, Europe, China, etc.), automakers are scrambling to keep up with demand. Many automakers are already sold out of their popular EV models for the year. With demand only expected to continue accelerating, the key question becomes: Where will automakers source all the materials?

Since the Inflation Reduction Act was passed in August, automakers from around the globe have rushed to secure deals to lock up critical battery materials in North America. For example, Hyundai, Mercedes-Benz, Honda, and Volkswagen (among others) have entered into agreements to source minerals in North America.

Volkswagen’s new JV with Umicore focuses on the automaker’s home market in Europe, where the automaker expects to overtake Tesla in EV sales by 2025, according to a Bloomberg Intelligence report.

The partnership was previously announced in December 2021, but today’s announcement confirms it, giving us a better idea of what we can expect going forward.

Why the Volkswagen Umicore partnership is significant

With Volkswagen’s PowerCo planning for six battery factories in total, it will require a significant amount of minerals to keep up with production.

That being said, Umicore announced in July its plans to build a manufacturing facility in Canada for cathode active battery materials (CAM) and their precursors (pCAM), which are crucial for EV battery performance and one of the most costly components.

The partnership aims for 160 GWh cell capacity per year by 2030, which is enough to power around 2.2 million EVs.

Thomas Schmall, chairman of the supervisory board of PowerCo, talks about how critical cathode material is to EV production, stating:

Volkswagen (PoweCo) and Umicore plan for an equal 50/50 partnership where investments, costs, and profits will be split down the middle. The partners plan to invest about €3 billion (about $2.9 billion) to upgrade its supply chain for superior material production capabilities.

The Umicore partnership looks to give Volkswagen a significant advantage in the European EV market with one of the first fully integrated supply chains, from mining to refining capabilities.