The Volkswagen ID. Buzz is a clear indicator of where the Geman automaker hopes to take the brand in the near future. VW has experienced its fair share of carbon emission scandals. Now, the company is focused on producing popular electric vehicle nameplates. The ID. Buzz electric microbus has been tested, and its specs prove that the new electric vehicle is worth the hype.

The Volkswagen ID. Buzz is a huge step for VW

The Volkswagen ID. Buzz signals a new era for VW, a company that has struggled to meet emission standard regulations in recent years. The automaker is now attempting to reduce its carbon footprint by producing EVs that compete with the best models in their respective vehicle segments. The Volkswagen ID.4 is competing with the Tesla Model Y electric SUV internationally.

VW has plans to produce an entire portfolio of electric vehicles in the future. The ID. Buzz is an EV that consumers may not have expected. The Buzz is a spinoff of popular retro VW microbuses. There’s a huge community of drivers that enjoy Volkawagen’s small bus. The ID. Buzz draws inspiration from a funky vehicle silhouette and brings it into the future using modern technology and an electric powertrain system.

Why is the ID. Buzz such a big deal? The production of the electric microbus proves that VW is committed to making an impact in the electric vehicle space. Top Gear has already named the ID. Buzz their Electric Car of the Year. This is some serious foreshadowing for the American market as it anxiously awaits the arrival of the innovative new vehicle.

How much driving range does the Volkswagen ID. Buzz get? 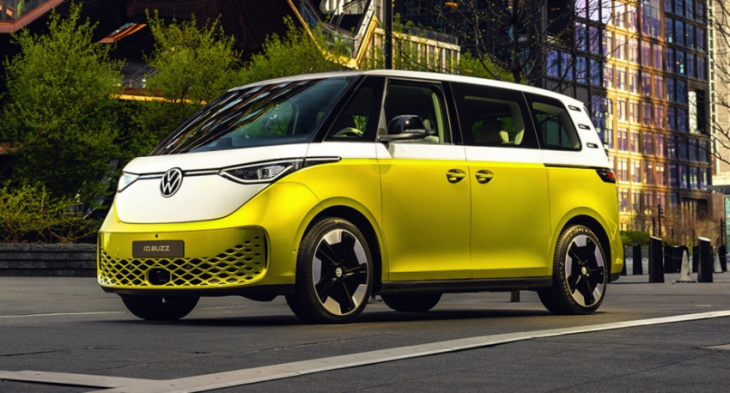 InsideEVs claims that the rear-wheel drive Volkswagen ID. Buzz gets about 225 miles of driving range. Its range decreases at high speeds due to energy consumption.

The VW ID. Buzz won’t make it to America until 2024, and the United States may get a different version of the electric bus from the one that is currently buzzing around Europe. Expect at least 200 miles of driving range out of the new EV. Like most automakers, expect Volkswagen to offer a long-range version for consumers at a higher price point.

The ID. Buzz’s range meets current industry standards based on the information available. That being said, its range is far from impressive for the rear-wheel drive model. In order for the ID. Buzz to be practical, consumers will have to get a home charger and have access to EV charging stations.

Volkswagen: The automaker of the future?

Vehicles like the Volkswagen ID.4 and the Volkswagen ID. Buzz will become ubiquitous in the years to come as EVs become more popular. Will Volkwsagen win the race to produce the most popular electric vehicle? The VW ID. Buzz could play a crucial role in the brand’s long-term electrification plan.