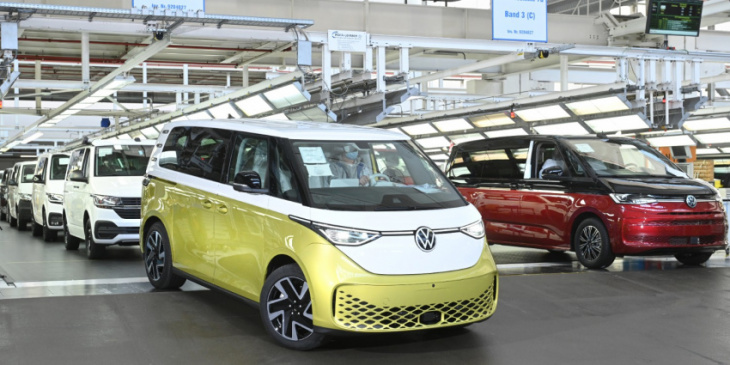 Volkswagen Commercial Vehicles has halted ID.Buzz production in Hanover for initially one week. There are quality problems with the battery. According to information from electrive, the battery cell is from a new supplier, so only the Hanover plant is affected and no other MEB plants.

As local paper Hannoversche Allgemeine Zeitung writes, some cell modules seem to fall short of the target performance. The result is voltage drops, which reduce the vehicle’s range and may also negatively impact the service life. The company confirmed that they had found deficiencies during quality checks by the supplier, but provided no further details.

Since the start of production earlier this month, VW Commercial Vehicles manufactured about 500 ID.Buzz vehicles but has not yet delivered to customers. The supplier of the battery cells was already working on the problem, VWCV said.

A spokesperson for Volkswagen Commercial Vehicles confirmed to electrive.net that only the ID. Buzz is affected – although other MEB models in the ID.3, ID.4 and ID.5 series with a battery with 77 kWh of usable energy content are also on offer. “It is a new battery cell from a different supplier that is currently only used in the ID.Buzz,” the spokesperson said. “Therefore, only the production in Hanover is affected, but not other locations.” However, he said, the new cell will later be used in other MEB models. The spokesman would not disclose which manufacturer was involved when asked.

It may be pure coincidence that currently, yet another battery problem with an MEB model became known – it is an isolated case. Norwegian eMobility Youtuber Björn Nyland recently had to abort a range test in a VW ID.5 GTX because the battery could only retrieve around 65 kWh of energy content. Usually, 77 kWh is the usable net energy content; gross, 82 kWh are installed in the vehicles. In the case of Nyland, VW Norway justified the measurements with a defective battery module.