VW wants you to think it has exhaust pipes. 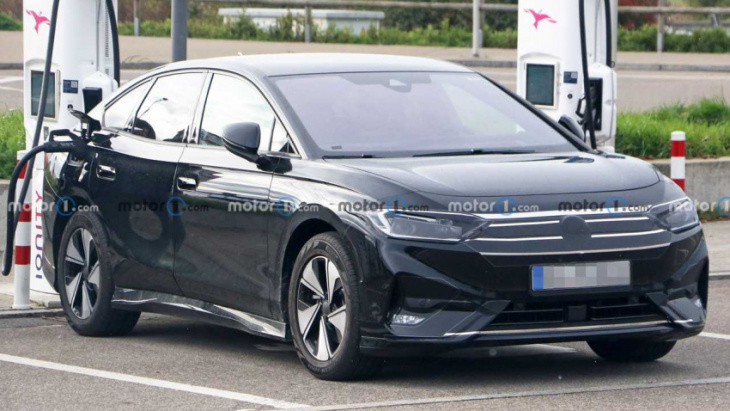 The Volkswagen Aero B is the brand’s concept for an electric sedan that is supposed to launch in the second half of 2023. We expect the production version to have a more creative name. These spy shots catch a vehicle that looks nearly production ready. There’s even a glimpse inside the cabin.

The Aero B features a trapezoidal opening in the front fascia and vertical inlets in the corners. VW’s engineers put decals over the headlights and tip of the nose. Judging by the concept’s design, there might be a light bar stretching across the vehicle’s face.

In profile, the Aero B has a sleek appearance. The flowing roof includes a steeply raked windshield. The charging port is on the passenger-side rear fender. The car rides on wheels with spokes that widen at the rim.

There are more decals hiding the vehicle’s design at the back. There are stickers over the taillights. Stripes create the outline of fake exhaust pipes on the bumper.

With the passenger door open, we get a good view of the Aero B’s interior. Unfortunately, a fabric panel hides most of the dashboard. A tiny portion of the digital instrument cluster is visible. A tall infotainment screen sticks up from the center stack, and it has buttons underneath.

The Aero B will ride on the MEB platform. Rear- and all-wheel drive configurations will be available. There will even be a GTX performance model at some point in the vehicle’s life. Exact powertrain details aren’t yet available, but the concept has a projected range of 435 miles (700 kilometers).

The name of the production-spec Aero B might be ID.7. VW filed trademarks for this moniker and ID.7 Tourer in Europe earlier this year. The latter title hints at the possibility of a wagon variant in the future.

VW will launch the production Aero B in China first. It’s not clear whether the company intends to sell the electric sedan in the United States. VW of America CEO Scott Keogh hinted at the possibility of selling the vehicle in the US.