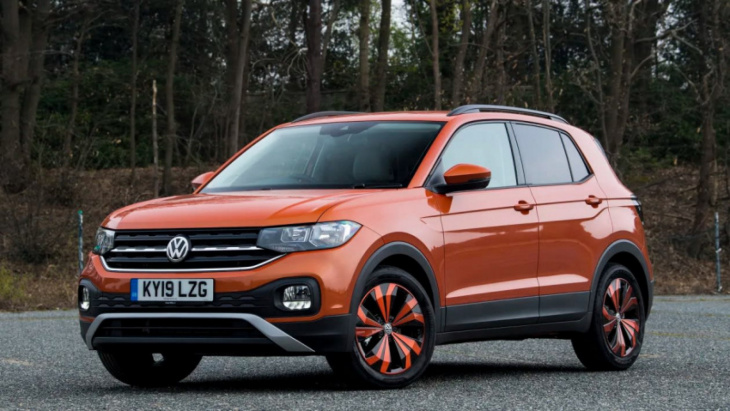 If you’re the sort of person who would previously have bought a Volkswagen Polo, but you’ve latched onto the trend of sitting a bit higher up, the T-Cross should be exactly what you’re looking for. Having said that, the T-Cross is 136mm longer than a Polo, which is why it has a bit more cabin space. As a result, VW’s smallest SUV is surprisingly usable for what remains a small model that’s easy to park, good to drive, refined and still has plenty of big-car features. These are the key things that struck us when we ran a T-Cross 1.0 TSI for six months in 2020. Despite its compact dimensions, we found that the T-Cross provided ideal frugal transport for a family of three, which is why we reckon that the crossover makes a decent used buy.

When Volkswagen tested the waters in 2003 with the launch of its first SUV, the Touareg, the German manufacturer soon found that it had a hit on its hands.

The problem was that while a lot of people rather fancied a VW SUV of their own, the Touareg was a big and expensive car, so its size and cost meant that it was out of reach for many. It didn’t take long for Volkswagen to offer a solution, though, in the form of the original Tiguan of 2008.

When that model also proved a hit, the firm continued with its quest to offer ever-smaller crossovers, first with the T-Roc in 2017, then with the T-Cross in 2019. Roughly the same size as a Polo, this high-riding supermini relative is just the thing for style-conscious buyers on a more modest budget.

Orders for the T-Cross opened in March 2019. Buyers could choose between 94bhp and 114bhp 1.0 TSI petrol engines, with the former only offered with a five-speed manual gearbox, while the more powerful option had either a six-speed manual transmission or a seven-speed DSG auto.

Within three months, a 94bhp 1.6 TDI diesel had been added to the range, with five-speed manual or seven-speed DSG auto options. The final powerplant to be added to the range, a 1.5 TSI petrol, arrived in January 2020. Rated at 148bhp, this engine only came with a seven-speed DSG automatic transmission, and as with the other units, only the front wheels were driven – there was no four-wheel-drive option. By summer 2021, the 1.6 TDI was killed off due to a lack of demand.

Which one should you buy?

We like all of the T-Cross engines and gearboxes, so we wouldn’t steer you away from any of them. We also wouldn’t suggest avoiding any trim level, because even the entry-level T-Cross S isn’t spartan. It has 16-inch alloys, an eight-inch touchscreen, a DAB radio, air-con, electrically adjustable door mirrors, auto emergency braking, plus electric windows front and rear. Move up to the SE and you’ll get 17-inch alloys, automatic headlights and wipers, adaptive cruise control, upgraded interior trim and a smartphone Mirrorlink for the infotainment. The range-topping SEL adds LED headlights, front sports seats, dual-zone climate control, parking sensors front and rear, navigation and privacy glass. The R-Line has 18-inch rims plus a bodykit, and DSG-equipped cars have paddle shifts.

Alternatives to the Volkswagen T-Cross

The most obvious rivals are found within the VW Group: the Skoda Kamiq and SEAT Arona are closely related to the T-Cross, so they share a lot of the safety and cabin tech along with the engines and transmissions. Ford’s Puma is still one of our favourite mini-SUVs, due to its engaging dynamics, value and practicality. The Kia Stonic is another strong contender, along with its cousins, the Hyundai Kona and Bayon; all have long warranties and provide excellent value.

The Citroen C3 Aircross looks appealing and has some good engines, and the same is true of Stellantis’s Peugeot 2008 and the Vauxhall Mokka. Toyota’s C-HR comes almost exclusively in hybrid form, while two other worthwhile options are the Nissan Juke and Renault Captur.

All versions have a tyre mobility kit. Space saver and full-size spare wheels are available from dealers and aftermarket sellers.

Some owners of manual 1.0 TSI 115 T-Crosses have had problems with jerkiness. It’s not known if the problem is stop/start-related.

Juddering windscreen wipers can be a problem, especially with newly built T-Crosses. Switching to Bosch Aerotwin blades is a popular solution.

Early cars can suffer from creaks and squeaks at the base of the A-pillar. It can be fixed, but it’s best to get a dealer to do it rather than do it yourself.

We’ve had no reports of major faults with the VW T-Cross. But VW was ranked 18th in the 2022 Driver Power brands survey, with 18.59 per cent of owners saying they had experienced a fault. Reliability wasn’t rated highly by respondents, either.

With supportive seats, a user-friendly dash and a surprisingly roomy rear seat that slides back and forth, the Volkswagen T-Cross is easy to live with. Rear-seat passengers have good headroom, but legroom is tight for tall people. 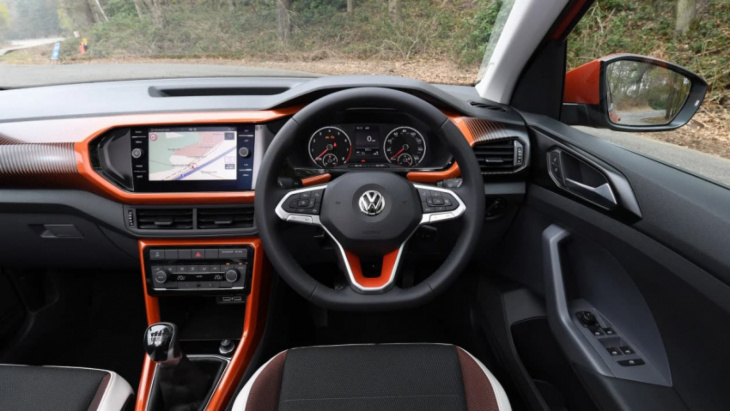 Boot space is impressive, at 385-455 litres with the rear seat in place, or 1,281 litres with the back rest folded. The T-Cross comes with an eight-inch touchscreen infotainment set-up, featuring DAB and Bluetooth. Sat-nav can be bought as an option on the S and SE, but is standard on the SEL and R line.

T-Cross owners can choose between Fixed and Flexible maintenance regimes. The former means a visit to the garage is due every 12 months or 9,300 miles, the latter increases this to up to every two years or 18,600 miles.

With the Fixed option, services alternate between Oil Change and Inspection, priced at £150 and £205 respectively. The Flexible scheme means these are both due every other year, so you don’t save any money but it means fewer visits to the workshop.

From its third birthday the T-Cross is eligible for discounted servicing, with Minor and Major services alternating at approximately £190 and £280 each. Three years is also when the first brake fluid change is due (at £69); it then needs to be replaced every two years. All engines have a cambelt that should be replaced every five years, at a cost of £669.

The T-Cross has been recalled twice so far since its launch. The first time was in February 2020 and affected just 35 cars, all of which had been built in May or June 2019. The problem centred on the curtain airbags, the detonators for which could fail to go off properly in the event of a collision, leading to the airbags not deploying correctly. The solution Volkswagen came up with was to replace these units altogether.

A second campaign was issued in October 2021, and this time a total of 1,104 cars were affected, all of which had been made between January and June 2021. This time a software glitch meant that the driver wasn’t alerted visually or acoustically if a rear-seat passenger wasn’t wearing their seatbelt. A software update was all that was needed to put things right.

Despite selling in reasonable numbers, the T-Cross has yet to appear in our Driver Power surveys. Four Volkswagens appeared in our 2022 Driver Power new-car poll: the T-Roc (which came 34th out of 75 entries), the Tiguan Mk2 (45th), the Polo Mk6 (51st) and the Golf Mk8 (75th). These are not stellar results, while Volkswagen as a whole came 18th out of 29 manufacturers in our 2022 brands survey.