With 780 horses at its disposal, this pumped-up wagon sounded heavenly at full throttle. 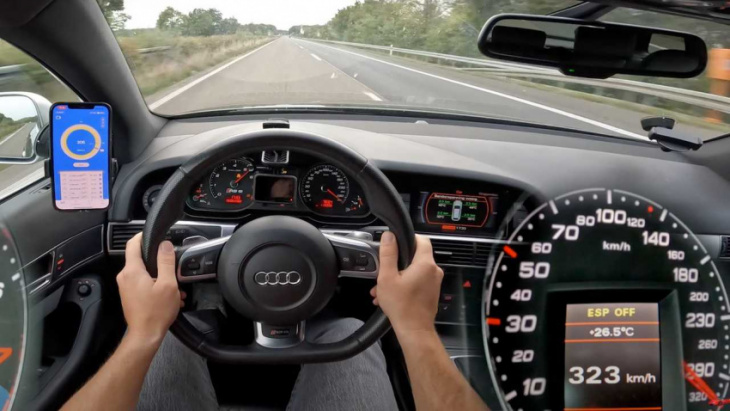 Before the era of V8-powered Audi RS6 wagons, there was a time when the German nameplate had a V10 underneath its hood. We’re talking about the C6 generation of the RS6, made between 2008 and 2011 – and we have one example here on a top-speed run at the German Autobahn, courtesy of AutoTopNL.

The extent of modifications to this tuned RS6 wasn’t disclosed but the mentioned numbers above translate to quicker sprints to the centenary than stock (3.9 vs 4.5 seconds) and faster top speed at 217 miles per hour (350 kilometers per hour). At least the video claimed those, but we have absolutely no reason to doubt them.

In the top speed run above, the Audi RS6 Avant ran out of speedometer, though it still didn’t reach its claimed top speed above. The fastest it got was 208 mph (335 km/h) and that’s probably due to reasons hard to avoid such as other road users.

What we love about this was that it sounded like a Lamborghini – both while inside the car and while outside during some flybys captured on video. That isn’t a surprise, actually, as the biturbo 5.0-liter V10 under the C6 RS6’s hood was related to the naturally aspirated V10 that powered the Type 42 Audi R8. And as we know, the first-generation R8 shared its chassis and engine with the Lamborghini Gallardo. So yes, the V10 TFSi mill will surely sound similar despite the differences in application in these cars.

Keyword: Tuned Audi RS6 V10 Runs Out Of Speedo, Sounds Like A Lambo On Autobahn