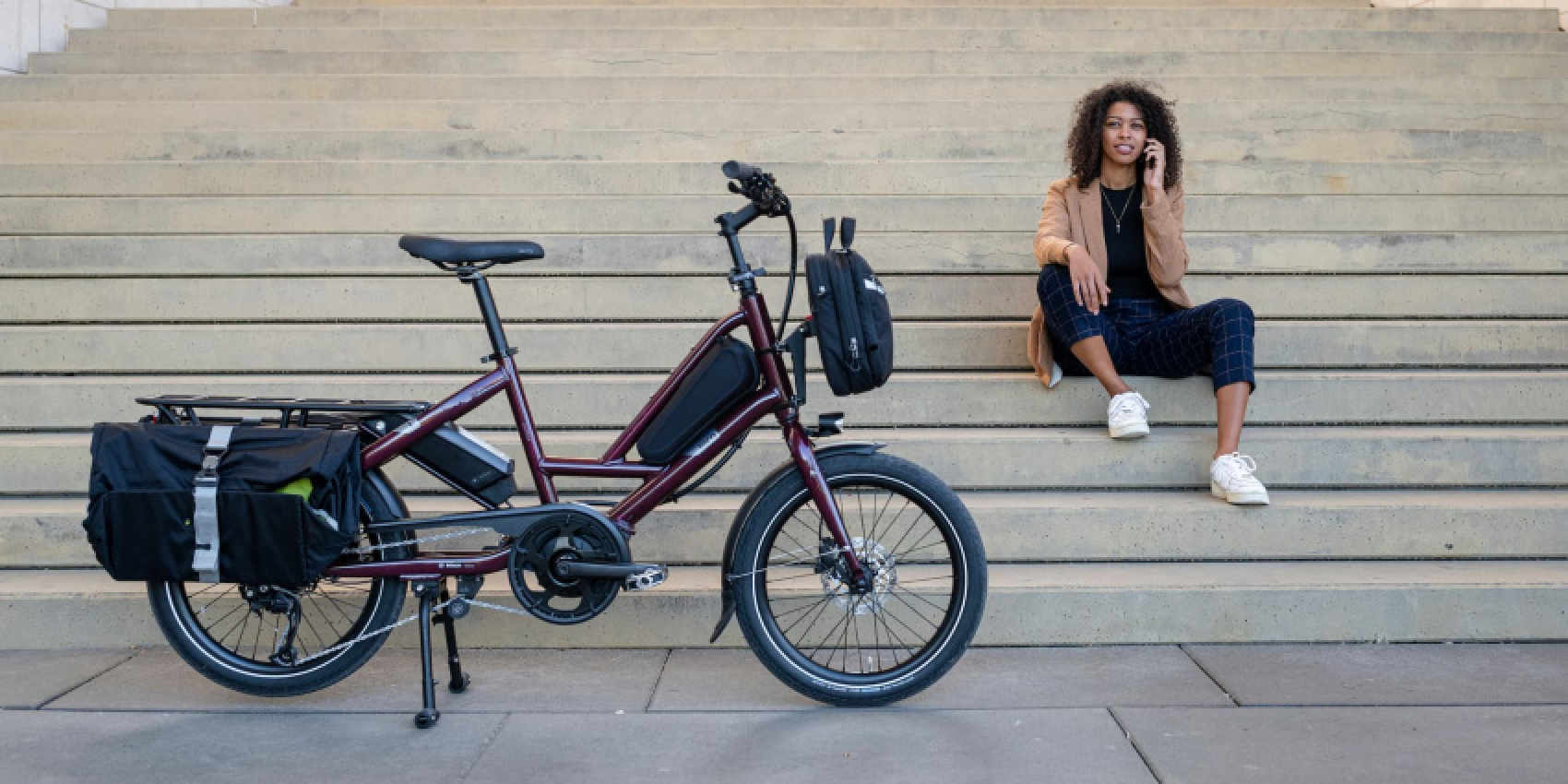 When I think of Tern and its popular electric cargo e-bikes, I think of two things: Incredible quality and incredibly expensive. But with the launch of its latest model today, the Tern Quick Haul, one of those things is fading away, and it’s not the quality.

The e-bike combines impressive cargo-hauling abilities with a small format to provide a serious car replacement candidate for urban riders.

Rolling on 20″ wheels, it has a smaller footprint than a typical full-size bike, yet it can carry more gear or passengers.

And it’s not only smaller in its typical footprint, but it can actually be parked standing on its tail thanks to Tern’s innovative rear rack. That can help it fit in a tiny elevator (think: Paris apartment) or in the corner of a small room or office.

That rear rack also provides plenty of room for strapping down gear, adding passenger seats, or even using Tern’s pet-carrying accessories. It’s the SUV of the electric bicycle world, yet in a somehow conveniently-sized package.

Tern’s Team Captain Josh Hon did an awesome job summing up exactly what type of uses e-bike the Quick Haul was designed for:

“The Quick Haul is how an e-bike optimized for city life should be designed. It should have a low step through frame for convenience, it should have plenty of room to carry stuff or even an extra passenger, and it should be built tough, so you can count on it for reliable long-term usage. And it should be compact so it can easily navigate stairwells, elevators, crowded bike parking areas, and busy streets.”

The Quick Haul is designed to carry loads of up to 150 kg (330 lb). And they surely can’t say this themselves, but you know if their lawyers will let them state that it can carry that much, they probably loaded twice that weight on it during testing.

Tern often shows its electric cargo bikes carrying kids, but I can vouch for the fact that they can carry adults on the back too. Josh Hon even took me for a spin on a GSD once, and it was perhaps even more fun (and a lot less responsibility) to watch life going by from the back seat.

In fact, to ensure safety under such heavy loads, Tern even applies its e-bikes to the most rigorous testing standards in the industry.

As Josh continued, Tern places serious importance on holding itself to a higher standard:

“We put our bikes through some of the toughest tests in the industry, and often, we design even more severe tests when we think existing standards aren’t tough enough.”

You may already be familiar with the Tern HSD and GSD electric bikes, two incredibly well-outfitted models that we’ve featured before. But those e-bikes are quite pricey, starting at nearly $4k and increasing quickly from there.

It looks like the company was able to get to that low price by cutting out a few of the fancier components we’re used to seeing. There’s no internally geared hub or electronic shifting on the entry-level Quick Haul D8. Instead, we’ve got a Shimano Acera derailleur with an eight-speed drivetrain connected to Bosch’s more affordable Active Line Plus motor. That means the bike will top out at 20 mph (32 km/h) in the US.

Upgrading to the US $3,299 Quick Haul P9 nets riders higher speeds of up to 28 mph (45 km/h) thanks to the inclusion of Bosch’s Performance Line or Performance Line Sport (likely depending on the location) motor, plus a nine-speed drivetrain. There will eventually be an even nicer Quick Haul P5i added to the line as well, and that model will feature a Shimano Nexus 5 internally geared hub with a chain or Gates belt drive (likely depending on the specific model chosen upon release).

Of note is the fact that at its US $2,999 price, the Quick Haul D8 ekes out the best possible tax credit under the E-BIKE Act, which if passed will provide a 30% tax credit towards the purchase of a new electric bike in the US, up to a $900 benefit. The chance of passage doesn’t look as rosy as it once did, but there’s always hope.