More than two and a half years after SpaceX began the process of securing regulatory approval for its next-generation Starlink constellation, the US Federal Communications Commission (FCC) has finally granted the company a license – but only after drastically decreasing its scope.

In May 2020, SpaceX filed its first FCC license application for Starlink Gen2, an upgraded constellation of 30,000 satellites. In the second half of 2021, SpaceX amended its Starlink Gen2 application to take full advantage of the company’s more powerful Starship rocket and further improve the constellation’s potential utility. Only in December 2021 did the FCC finally accept SpaceX’s Gen2 application for filing, kicking off the final review process.

On November 29th, 2022, the FCC completed that review and granted SpaceX permission to launch just 7,500 of the ~30,000 Starlink Gen2 satellites it had requested permission for more than 30 months prior. The FCC offered no explanation of how it arrived at its arbitrary 75% reduction, nor why the resulting number is slightly lower than a different 7,518-satellite Starlink Gen1 constellation SpaceX had already received a license to deploy in late 2018. Adding insult to injury, the FCC repeatedly acknowledges that “the total number of satellites SpaceX is authorized to deploy is not increased by our action today, and in fact is slightly reduced.”

The FCC has granted partial approval to SpaceX for Starlink Gen2, allowing it to deploy up to 7,500 satellites (of requested 29,988). “We defer action on the remainder of SpaceX’s application at this time.” https://t.co/g55c6i1ZzR

That claimed reduction is thanks to the fact that shortly before this decision, SpaceX told the FCC in good faith that it would voluntarily avoid launching the dedicated V-band Starlink constellation it already received a license for in order “to significantly reduce the total number of satellites ultimately on orbit.” Instead, once Starlink Gen2 was approved, it would request permission to add V-band payloads to a subset of the 29,988 planned Gen2 satellites, achieving a similar result without the need for another 7,518 satellites.

In response, the FCC slashed the total number of Starlink Gen2 satellites permitted to less than the number of satellites approved by the FCC’s November 2018 Starlink V-band authorization; limited those satellites to middle-ground orbits, entirely precluding Gen2 launches to higher or lower orbits; and didn’t even structure its compromise in a way that would at least allow SpaceX to fully complete three Starlink Gen2 ‘shells.’ Worse, the FCC’s partial grant barely mentioned SpaceX’s detailed plans to use new E-band antennas on Starlink Gen2 satellites and next-generation ground stations, simply stating that it will “defer acting on” the request until “further review and coordination with Federal users.” 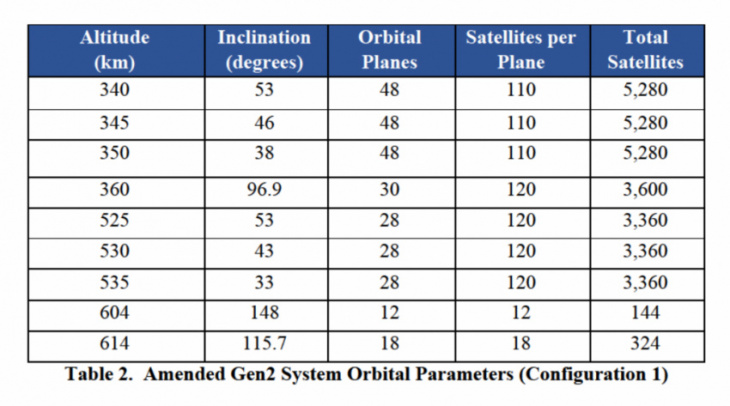 The FCC’s “partial grant” only allows SpaceX to launch 7,500 of 10,080 Starlink Gen2 satellites meant to operate at altitudes between 525 and 535 kilometers.

Throughout the partial grant, the FCC couches its decision to drastically downscale SpaceX’s Starlink Gen2 constellation in terms of needing more time “to evaluate the complex and novel issues on the record before [the Commission],” raising the question of what exactly the Commission was doing instead in the 30 months since SpaceX’s first Gen2 application and 15 months since its Gen2 modification. In comparison, SpaceX received a full license for its 7,518-satellite V-band constellation less than five months after applying. SpaceX’s 4,408-satellite Starlink Gen1 constellation – the first megaconstellation ever reviewed by the modern FCC – was licensed 16 months after its first application and eight months after a modified application was submitted.

Adding to the oddity of the unusual and inconsistent decision-making in this FCC ruling, the Commission openly acknowledges that the idea to grant SpaceX permission to launch a fraction of its Starlink Gen2 constellation came from Amazon’s Project Kuiper [PDF], a major prospective Starlink competitor. The FCC says it agreed with Amazon’s argument, stating that “the public interest would be served by taking this approach in order to permit monitoring of developments involving this large-scale deployment and permit additional consideration of issues unique to the other orbits SpaceX requests.”

The V-band Starlink constellation already approved by the FCC was for 7,518 satellites in very low Earth orbits (~340 km). In the first 4,425-satellite Starlink constellation licensed by the FCC, the Commission gave SpaceX permission to operate 2,814 satellites at orbits between 1100 and 1300 kilometers. Increasingly conscious of the consequences of space debris, which would last hundreds of years at 1000+ kilometers, SpaceX later requested permission in 2019 and 2020 to launch those 2,814 satellites to around 550 kilometers, where failed satellites would reenter in just five years. For unknown reasons, the FCC only fully approved the change two years later, in April 2021.

The “other orbits [requested by SpaceX]” that the FCC says create unique issues that demand “additional consideration” of Starlink Gen2 are for 19,400 satellites between 340 and 360 kilometers and 468 satellites between 604 and 614 kilometers. Starlink satellites are expected to be around four times heavier and feature a magnitude more surface area, but the fact remains that the FCC has already granted SpaceX permission to launch almost 3000 smaller satellites to orbits much higher than 604 kilometers and more than 7500 satellites to orbits lower than 360 kilometers. It’s thus hard not to conclude that the Commission’s claims that a partial license denial was warranted by “concerns about orbital debris and space safety,” and “issues unique to…other orbits” are incoherent at best.

Perhaps the strangest inclusion in the partial grant is a decision by the FCC to subject SpaceX to an arbitrary metric devised by another third-party, for-profit company LeoLabs. In a March 2022 letter, LeoLabs reportedly proposed that “SpaceX’s authorization to continue deploying satellites” be directly linked to an arbitrary metric measuring “the number of years each failed satellite remains in orbit, summed across all failed satellites.” The FCC apparently loved the suggestion and made it an explicit condition of its already harsh Starlink Gen2 authorization, even adopting the arbitrary limit of “100 object years” proposed by LeoLabs.

In other words, once the sum of the time required for all failed Starlink Gen2 satellites to naturally deorbit reaches 100 years, the FCC will force SpaceX to “cease satellite deployment” while it “[reviews] sources of satellite failure” and “determine[s] whether there are any adequate and reliable mitigation measures going forward.” The FCC acknowledges that the arbitrary 100-year limit means that the failure of just 20 Starlink satellites at operational orbits would force the company to halt launches. The Commission does not explain how it will decide when SpaceX can restart Starlink launches after a launch halt. SpaceX must simultaneously follow the FCC’s deployment schedule, which could see the company’s license revoked if it doesn’t deploy 3,750 Starlink Gen2 satellites by November 2028 and all 7,500 satellites by November 2031.

Based on the unofficial observations of astrophysicist Jonathan McDowell, SpaceX currently has more 30 failed Starlink Gen1 satellites at or close to their operational altitudes of 500+ kilometers, meaning that SpaceX would almost certainly be forced to stop launching Gen1 satellites if this arbitrary new rule were applied to other constellations. The same is true for competitor OneWeb, which had a single satellite fail at around 1200 kilometers in 2021. At that altitude, it will likely take hundreds of “object years” to naturally deorbit, easily surpassing LeoLabs’ draconian 100-year limit.

In theory, the FCC does make it clear that it will consider changing those restrictions and allowing SpaceX to launch more of its proposed Starlink Gen2 constellation in the future. But the Commission has also repeatedly demonstrated to SpaceX that it will happily take years to modify existing licenses or approve new ones – not a particularly reassuring foundation for investments as large and precarious as megaconstellations.

Ultimately, short of shady handshake deals in back rooms, the FCC’s partial grant leaves SpaceX’s Starlink Gen2 constellation in an undesirable position. For the company to proceed under the current license, it could be forced to redesign its satellites and ground stations to avoid the E-band, or gamble by continuing to build and deploy satellites and ground stations with E-band antennas without a guarantee that it’ll ever be able to use that hardware. There is also no guarantee that the FCC will permit SpaceX to launch any of the ~22,500 satellites left on the table by the partial grant, which will drastically change the financial calculus that determines whether the constellation is economically viable and how expansive associated infrastructure needs to be.

Additionally, if SpaceX accepts the gambit and launches all 7,500 approved Gen2 satellites only for the FCC to fail to approve expansions, Starlink Gen2 would be stuck with zero polar coverage, significantly reducing the constellation’s overall utility. Starlink Gen2 likely represents an investment of at least $30-60 billion (assuming an unprecedentedly low $1-2M to build and launch each 50-150 Gbps satellite). With its partial license denial and the addition of several new and arbitrary conditions, the FCC is effectively forcing SpaceX to take an even riskier gamble with the billions of dollars of brand new infrastructure it will need to build to manufacture, launch, operate, and utilize its Starlink Gen2 constellation.

5 Holiday Gifts for the Car Enthusiast In Your Life

The best white elephant gift ideas for under $25

Save up to $240 on new tires with these holiday deals

#1: Grand Prix Stellar Cast Groundbreaking Visuals And The Sounds! #2: Ford v Ferrari Le Mans, Back In The Day Hot Heads & High Tension #3: American Graffiti Before They Were Stars Hot Rods & Cool Cars Where Were You in ’62? Amazing Shots #5: Le Mans All Action, ...

Walmart demonstrates how drones are the future of grocery delivery

This morning, a video posted on TikTok shows the Walmart drone delivery system in action. As the battle for e-commerce dominance has escalated over the past few years, Walmart has taken to the skies to battle with Amazon to be the first to offer drone delivery of customer orders. ...


View more: Walmart demonstrates how drones are the future of grocery delivery

SAN FRANCISCO: Google rivals have unveiled a project to make freely available data sets for map features to be built into online offerings. Alphabet-owned Google dominates online mapping, selling its services to other companies or platforms and using location and navigation capabilities to enhance its other offerings, including online ...

Jeremy Clarkson Has Nothing Left to Say

After three decades of public contrarianism, Clarkson's most recent column suggests he is out of ideas but still full of anger.


View more: Jeremy Clarkson Has Nothing Left to Say

Jeremy Clarkson has said he is “horrified to have caused so much hurt” following backlash over comments he made in a newspaper column about how he “hated” the Duchess of Sussex. The former Top Gear presenter, 62, said he would “be more careful in future” after the piece, written in ...

Bikes instead of cars: BYCS wants to halve car traffic in city centers by 2030

Dreaming of a new car for the holidays? Here's why you should keep dreaming

From 5G to a backseat cinema, is the BMW i7 the most hi-tech car in the world?

Next-gen 2024 Toyota 4Runner likely to be another Hybrid SUV

14 Holiday gift ideas for the auto enthusiast in your life

New JV focuses on truck charging at largest US ports

Could the Tesla Model Y be the best selling vehicle of 2023?

Joules, Roll-Royce, Raleigh, Derby County and Boots: 20 of the most read East Midlands stories of 2022

Small but powerful – the perfect car for students

The Top Winter Tires for Safer Driving in Snow