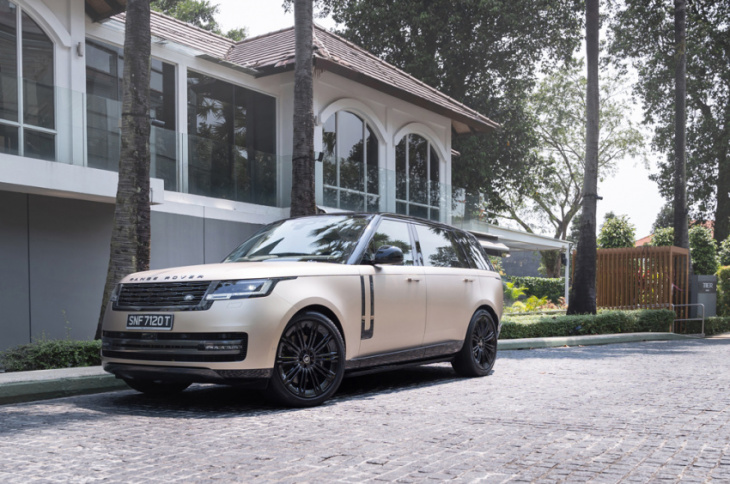 How do you justify the paradox that is the Range Rover? With its close ties to its Land Rover cousin, it has go-anywhere mud-plugging prowess in its genes, yet with each successive generation it becomes ever more sybaritic, with swathes of softest leather receiving your body as you sink into its plush seats, and deep-pile carpet caressing your Gucci loafers or Louboutin heels.

That conundrum is all the more acute in urban Singapore. We all know every model in the Range Rover lineup is sure-footed as a mountain goat over the most fearsome terrain – we’ve seen the extreme Youtube videos, and have even tried some of their cars on off-road courses overseas.

With its MENSA-level Terrain Response system it may be capable of clambering to the top of Mount Kilimanjaro for all we know, but beyond bragging rights, this does nothing for us here. Wading depth, breakover angle, wheel articulation – these matter far less to us here than cold aircon and a great stereo.

It is the other facet of the car which is of far more relevance to us – its luxury-limo aspirations. 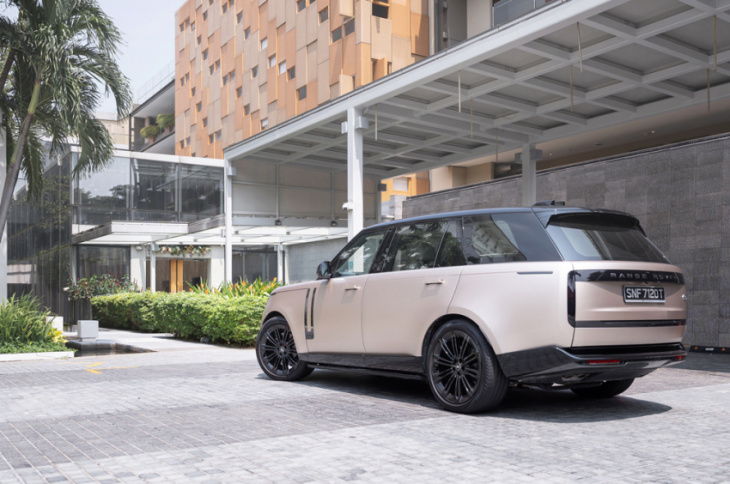 And on this count the new, fifth-generation Range Rover certainly looks the part. As ever it stands tall and imposing, its bluff, aristocratic nose leading into traditional Range Rover proportions and styling elements. That straight, pronounced shoulderline is unmistakeable, as are the clamshell bonnet, upright windscreen, “floating” roof and rear end which tapers slightly in both plan view and side elevation.

The tail lamps are dramatically but neatly concealed in a continuous gloss black rectangle of trim encircling the tailgate, and coupled with the rest of the vast, almost unadorned bodywork and flush, retractable door handles, give the car an imposing, almost monolithic mien. Despite its house-like size and shape, drag coefficient is a remarkably low 0.30.

Other luxury marques try, with varied degrees of success, to foist presence and gravitas onto their flagship models by all manner of extreme body surfacing, aggressive bumpers, angry headlamp graphics, in-your-face grilles and other try-hard styling devices, but the Range Rover impresses just by being itself. It was born blue-blooded, and it shows.

And simplicity rules on the inside too. The low-line fascia is linear and clear, and draws on current tech to clean things up yet further. Consigning minor functions to the 13.1-inch configurable central touchscreen (now with haptic feedback) avoids the clutter of countless buttons, yet for the frequently-used climate controls there are still physical dials. 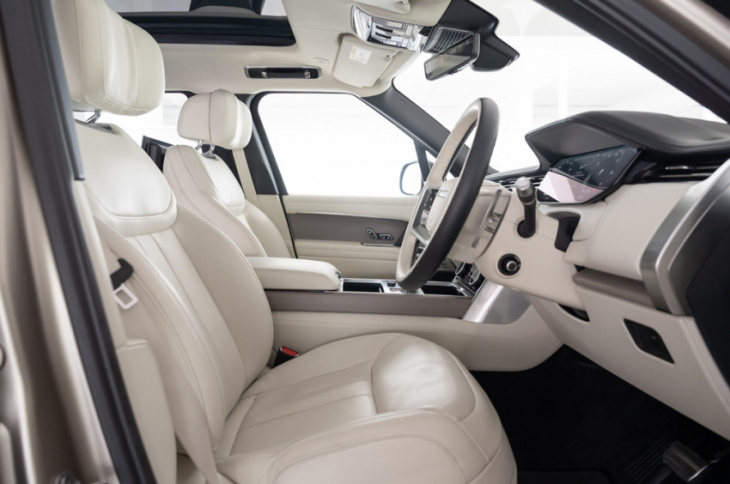 The cabin’s minimalist vibe belies the vast amount of equipment lurking beneath the surface. The instrument panel is another massive (13.7-inch) configurable screen which is a model of clarity, but for drivers who can’t be bothered to cast their eyes downwards, there is Heads-Up Display as standard too. You can issue instructions via voice command, the car using Amazon Alexa technology for the full seamless AI experience.

Naturally, the car is both Apple CarPlay and Android Auto compatible, and there are no fewer than 8 USB-C sockets throughout the cabin. Sound duties are ably handled by a 1600W Meridian system with 35(!) speakers, and which features active noise cancellation to counter wheel, tyre and engine noise.

The interior rear-view camera transforms into a rear camera display screen at the touch of a button (in case heads or luggage are obstructing the mirror’s line of sight), and a 3D surround camera function stitches the images from the four external surround cameras to create a 360-degree plan, 3D perspective or kerb and junction views, to aid low-speed or close-quarters manuouevring.

Unlike most other cars (even other SUVs), you have to clamber some way up to board the Range Rover, so towering is it. An optional retractable side step helps with access, but costs a five-figure sum. 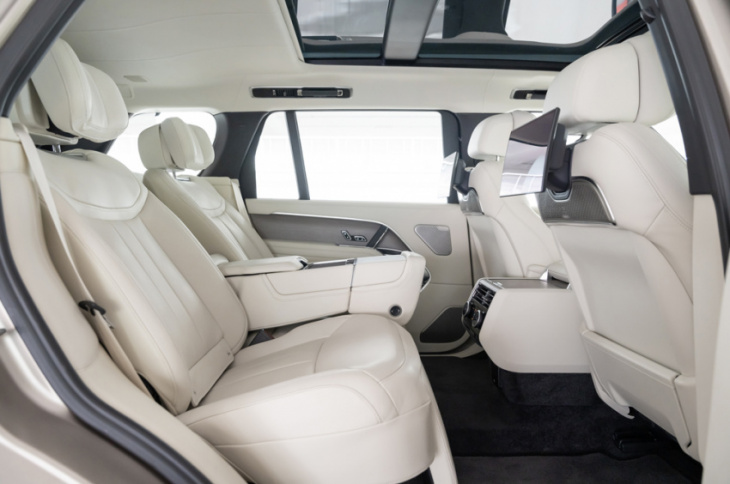 THE AIR UP THERE

Once inside, you sit upright on the plump, throne-like front seats, with a gloriously commanding view from your elevated perch. But it is in the back that the full plutocratic experience is on offer, especially if you are in the long-wheelbase version like our test car. Stretching a full 200mm longer than the standard-wheelbase car (taking total length to 5252mm – just shy of a Mercedes S-Class), the LWB is simply massive in the back.

“Our” car is the top Autobiography spec, and exploits that extra room to great effect with “Executive Class” rear seats that slide and recline individually by up to 12 degrees. They also come with powered lumbar and headrest adjustment and integrated massage, heating and cooling functions, and individual screens mounted on the backs of the front seats – all of which are controllable via an 8-inch touchscreen housed in the (powered) fold-down rear centre console.

Alternatively, the LWB version can be specced with a third row of seats, large enough to house 2 full-grown adults in comfort. 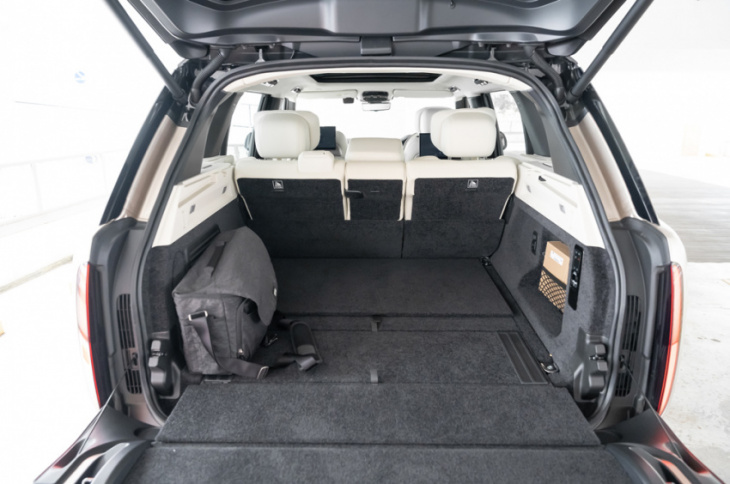 Apart from having lots of space for people, the cabin has ample room for chattels too. There are stowage bins and cubbies everywhere, and even an optional fridge in the front centre console that can swallow up to four 500ml bottles.

The boot is huge too with an over 1000-litre capacity, and is easily accessed thanks to the Range Rover’s trademark two-piece tailgate, where the lower half flips downward independently of the top-hinged glass area above, to double as a seat for picnics and such. All electrically powered, as you’d expect.

Ensconced in such opulence, you would reasonably be content to just luxuriate in your leather-lined sanctuary going nowhere, but the Range Rover proves that it can hustle too – at least in a straight line. The turbocharged 4.4-litre petrol V8 under that clamshell bonnet on our test car packs 530hp and 750Nm of torque, enough to propel this 2.6-tonne building-on-wheels to 100km/h in just 4.7 seconds. 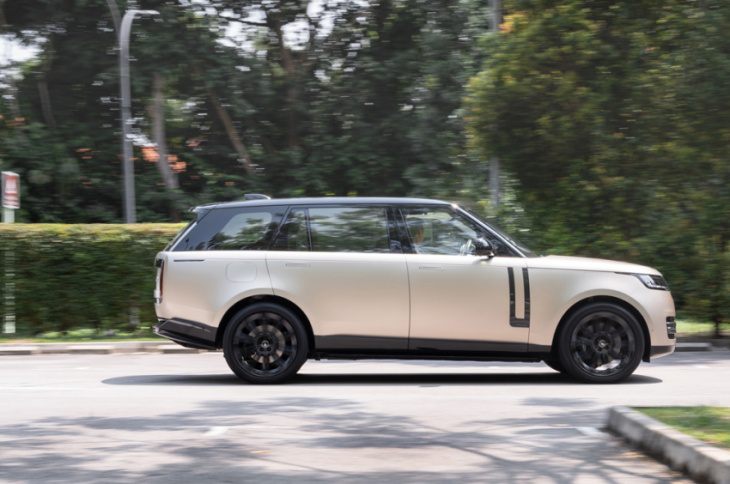 The engine is a distant purr unless you’re really gunning it, but that would be most unseemly. Road noise is well-quelled too, and apart from slight wind noise at high speeds, the cabin remains a hushed cocoon.

The Range Rover’s cornering ability can’t quite match its straight-line enthusiasm though. It actually does an impressive job of disguising its considerable height and weight, and with all-wheel-steering as standard it is far more agile than it has any right to be, but ultimately there is no defying the laws of physics and you find yourself backing off so that pitch and roll don’t get too pronounced in sharp bends.

The air suspension smothers most types of bumps ably, although sharp ridges can still be felt – perhaps an upshot of the car’s immense 23-inch wheels. The body could also be a touch better tied-down when charging over severe undulations.

But ultimately, driving dynamics are hardly the point in something so vast and regal. Range Rover themselves won’t say it, but surely the draw of this car, at least within the confines of our little urban island, is the sense of superiority you get just climbing up into that spare-no-expense cabin, shutting everything out, and looking down on the rest of the world. If you have the means, that alone may be worth the over three-quarter million asking price. 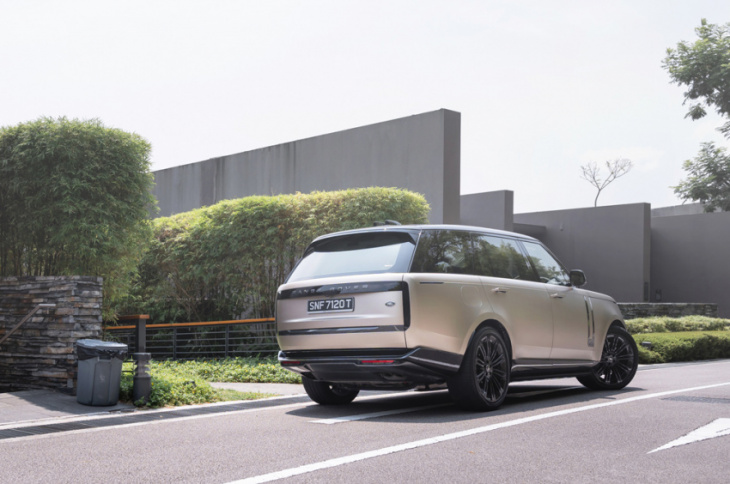 Zooming with DRIVEN: The new Range Rover Sport (and how the Sport came to be!)

He shoots, it misses


View more: Jeremy Clarkson finds Range Rover Sport no match for its big brother when it comes to carrying his shotgun

The Range Rover has become larger, pricier and more opulent with its latest generation. This also means that the Range Rover Sport, now in its newest third generation, can fully come into its own as a slightly more driver-focused and approachable spin on the Range Rover experience. How much of ...

The new generation Range Rover will, according to JLR, offer more of everything

The luxe off-road bruiser plays to its legacy, with subtle British style.

3 Things to Know Before Buying a Used Range Rover

A new lease on life for tired Range Rovers

The good and the bad of hybrid cars