The Australian Supercars Championship race car is almost as loud as Fallon's screaming. 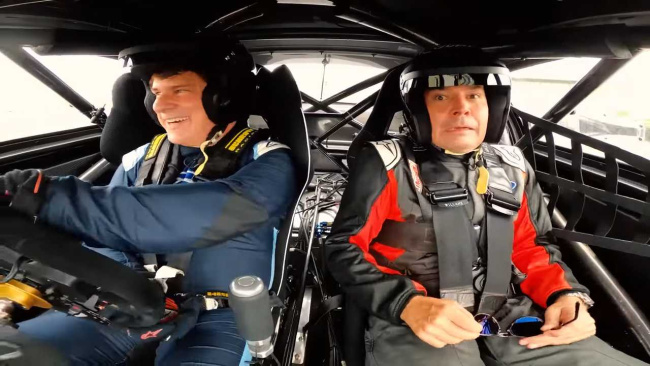 The Jimmys are at it again. In the passenger seat of this Australian-spec Ford Mustang Gen2 Supercar race car is comedian and The Tonight Show host Jimmy Fallon. The other seat is occupied by Ford CEO and part-time race car driver Jimmy Farley, though we suspect he might prefer Jim. Based on the video preview image at the top of the article, you can guess how this leisurely drive around a race track played out.

The tomfoolery occurred at the M1 Concourse about 30 miles north of Detroit in Pontiac, Michigan. After suiting up, they strap into the ‘Stang with Farley promising some slow warmup laps to start. That doesn’t last long, and though Fallon is certainly putting on a show for the camera, we suspect there were a few legit moments of terror, or agitated concern at the very least.

As for Farley, he appears to be having a blast. Despite running one of the largest auto manufacturing companies in the world, the full-time Ford CEO still enjoys racing and occasionally slips out of the office for some track time. Having the ability to race was part of his CEO agreement, and it looks like he’s no stranger to a high-output race car … despite telling Fallon he has no idea what he’s doing.

For those scratching their heads on a Mustang Supercar, this isn’t a supercar in the same vein as Lamborghini or Ferrari. The Australian Supercars Championship is a racing series not unlike NASCAR, though the action takes place on road courses instead of ovals.

Ford previously campaigned the Australian-specific Falcon sedan in the series, which is why the Gen2 Mustang race car featured in this video looks a bit strange. In switching from the Falcon to the Mustang, the chassis is taken from the Falcon so it’s not a clean-sheet setup for the S550 Mustang body. That will change with the new Gen3 Mustang Supercar, revealed earlier this year.

Will Fallon get another ride in the new race car? After this experience with Farley behind the wheel, perhaps the better question is, does he want one?