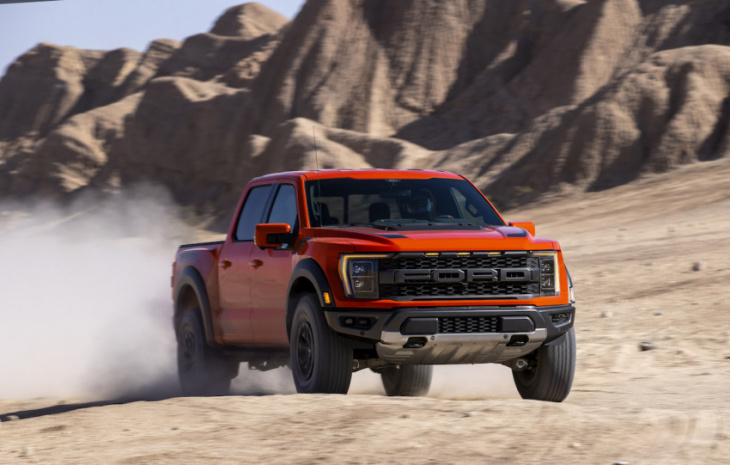 The Ford F-150 Raptor used to dominate the automotive industry with little to no competition, but then the supercharged 702 hp Ram 1500 TRX came along, shaking up the pickup truck market.

Ford responded by placing a 5.2-liter supercharged V8 engine into the existing framework of what is now fondly known as the “Big Raptor.” Replacing the 3.5-liter turbo V6 that delivered 450 hp and 510 lb-ft of torque, the powerful new V8 produces an astounding 700 hp and 640 lb-ft of torque.

Along with these performance changes came a significant price increase, leaving many consumers with sticker shock and wondering if the “Big Raptor” was worth the $100,000 investment.

The 2023 Ford F-150 Raptor R (the “Big Raptor”) is getting its dynamic power from a Shelby GT500 V8 engine paired with a 10-speed automatic transmission, signaling the most powerful engine ever offered in a Ford production pickup.

Additional upgrades include a five-link rear coil-spring setup and larger internal-bypass dampers for superior suspension performance. The “Big Raptor” also has an increased towing capacity, now capable of handling 1,400 lbs of payload capacity and up to 8,700 lbs of towing power, making it an ideal choice for small boat and trailer owners.

According to Car and Driver, the enhanced pickup comes standard with 37-inch BF Goodrich All-Terrain T/A K02 tires, which offer “incredible traction and ride quality on even the most treacherous terrain.”

The EPA estimated fuel economy for the thirsty 2023 Ford F-150 Raptor R is rated at a mere 10 mpg city, 15 mpg highway, and 12 mpg combined. But, as Autoblog points out, “The V8 is straight-up nasty, with an off-road exhaust mode that will liquefy children’s ear drums.” They explain, “It’ll do everything the V6 Raptor does just a little bit quicker and with a whole lot more fanfare.”

Is the F-150 Raptor R worth the hefty price tag?

Because of its unsurpassed power and bigger-than-life nature, the four-door F-150 Raptor R is worth the $109,145 price tag.

The supercharged V8 pits the “Big Raptor” against Ram’s 1500 TRX powered by the Hellcat. According to C-Net, the Ford F-150 surpasses the TRX in off-road capabilities, besting the pickup in every category with better ground clearance, approach angle, departure angle, and break-over angle.

The TRX has impressive towing stats of 1,130 lbs of payload capacity and towing capabilities up to 8,100 pounds, but is still considerably less than the 8,700 lb towing power offered by the “Big Raptor.”

When it comes to off-road prowess, the Raptor R is better for off-road driving when compared to the Ram 1500 TRX. The Ford F-150 Raptor R has a 5,950 lb base weight, with the heavier TRX weighing in at 6,350 lbs, making the Raptor the better choice for traversing off-road trails.

The only pickup truck currently utilizing the powerful Hellcat engine is the 2023 Ram 1500 TRX. The 6.2-liter supercharged V8 is paired with an 8-speed automatic transmission, delivering 702 hp and 650 lb-ft of torque, keeping in line with the specs on the 2023 Ford F-150 Raptor R.

MotorTrend named the TRX as the 2021 MotorTrend Truck of the Year saying, “A tight market for hot vehicles should mean the Raptor R is going to be hard to get, and that could mean that $109,145 represents a steal.”