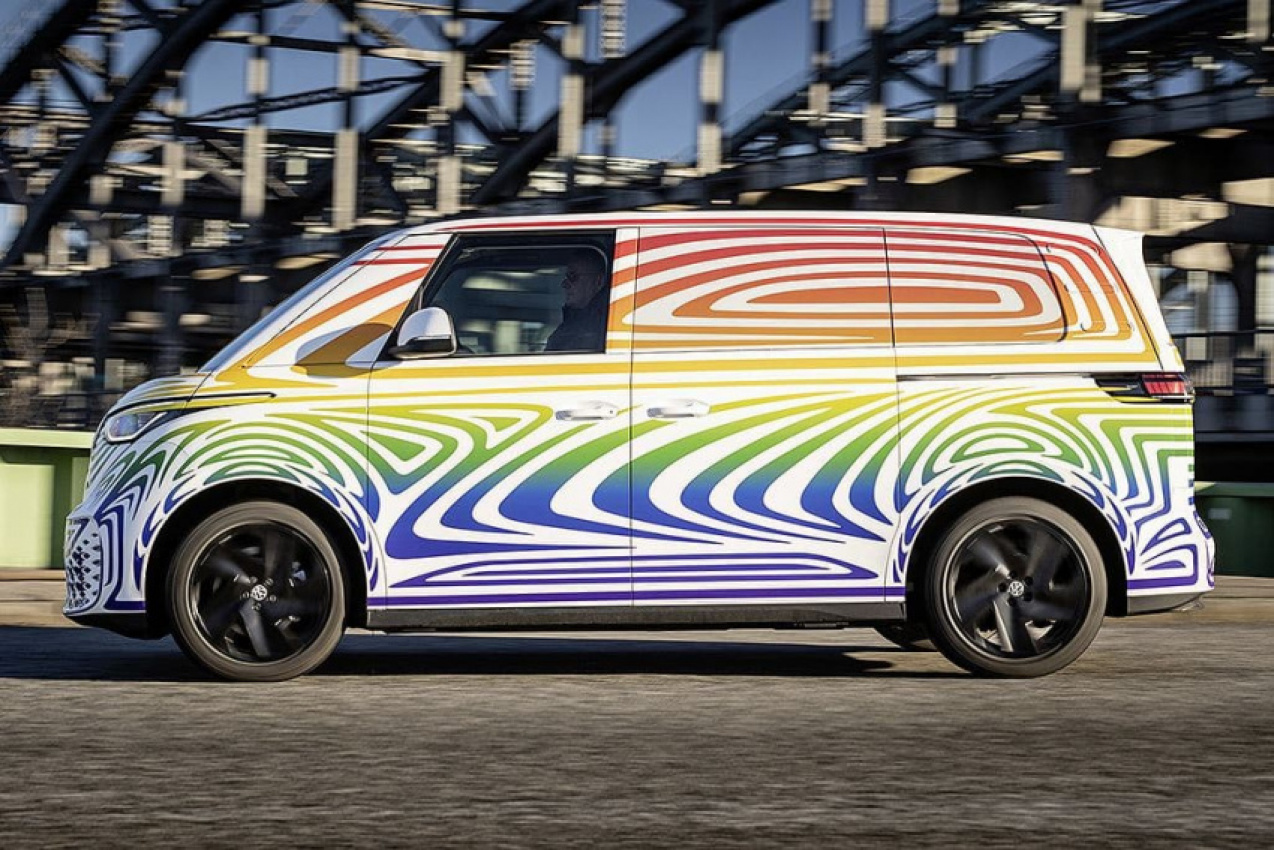 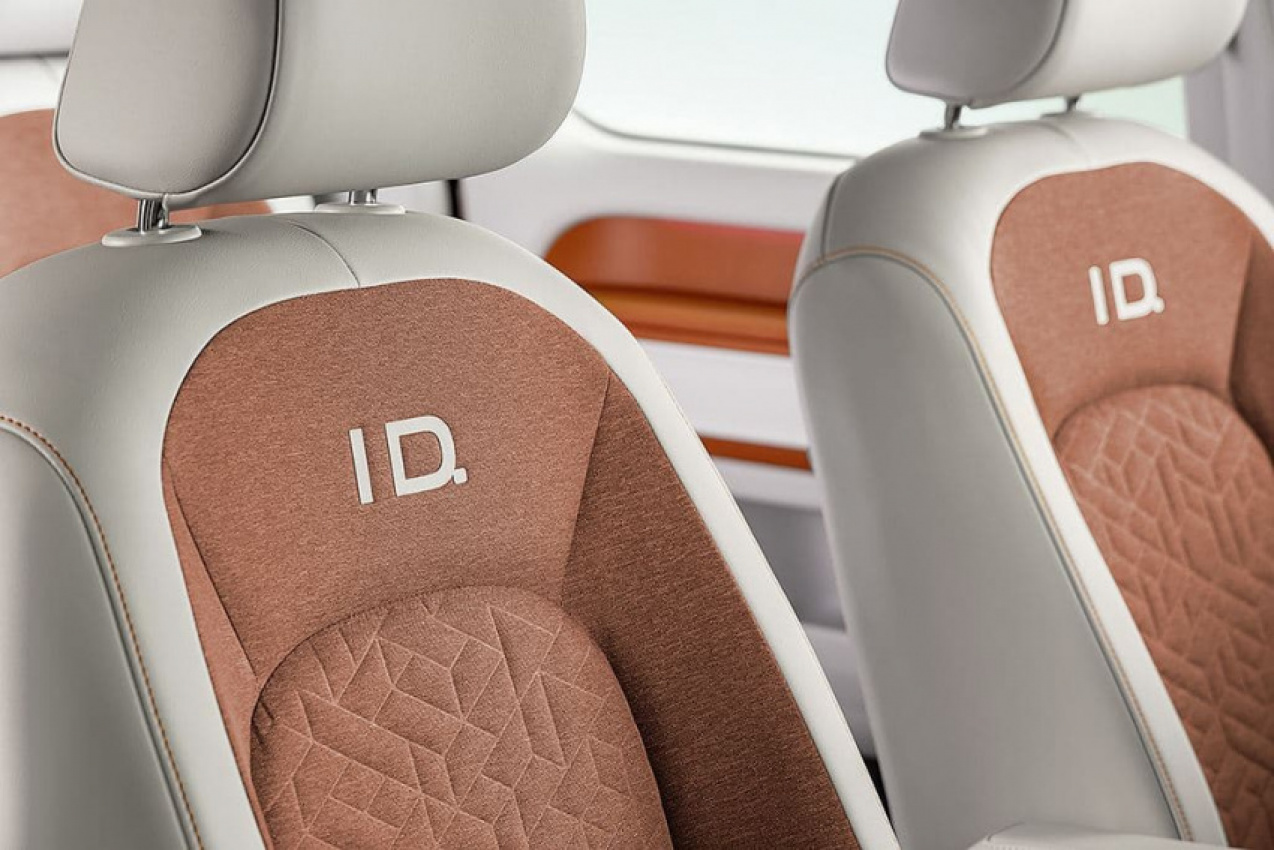 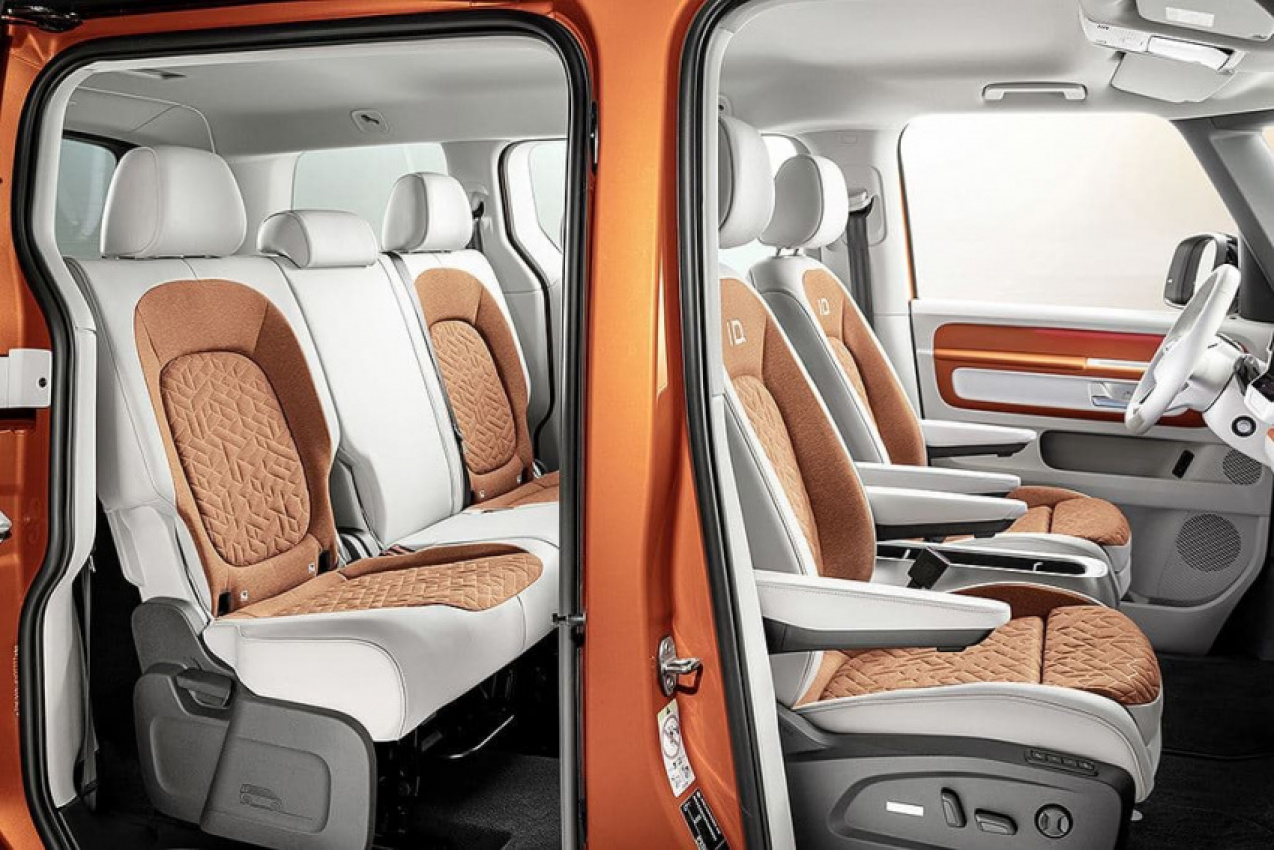 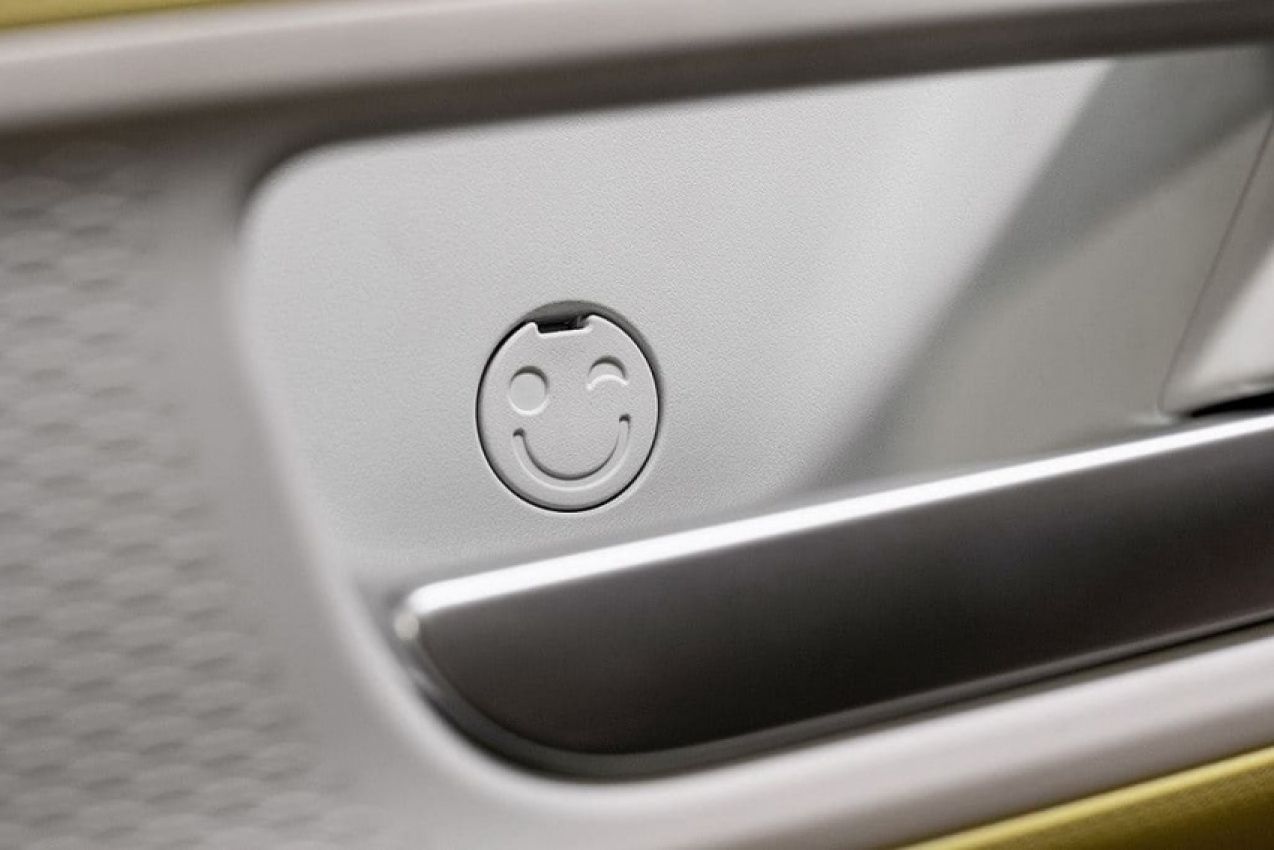 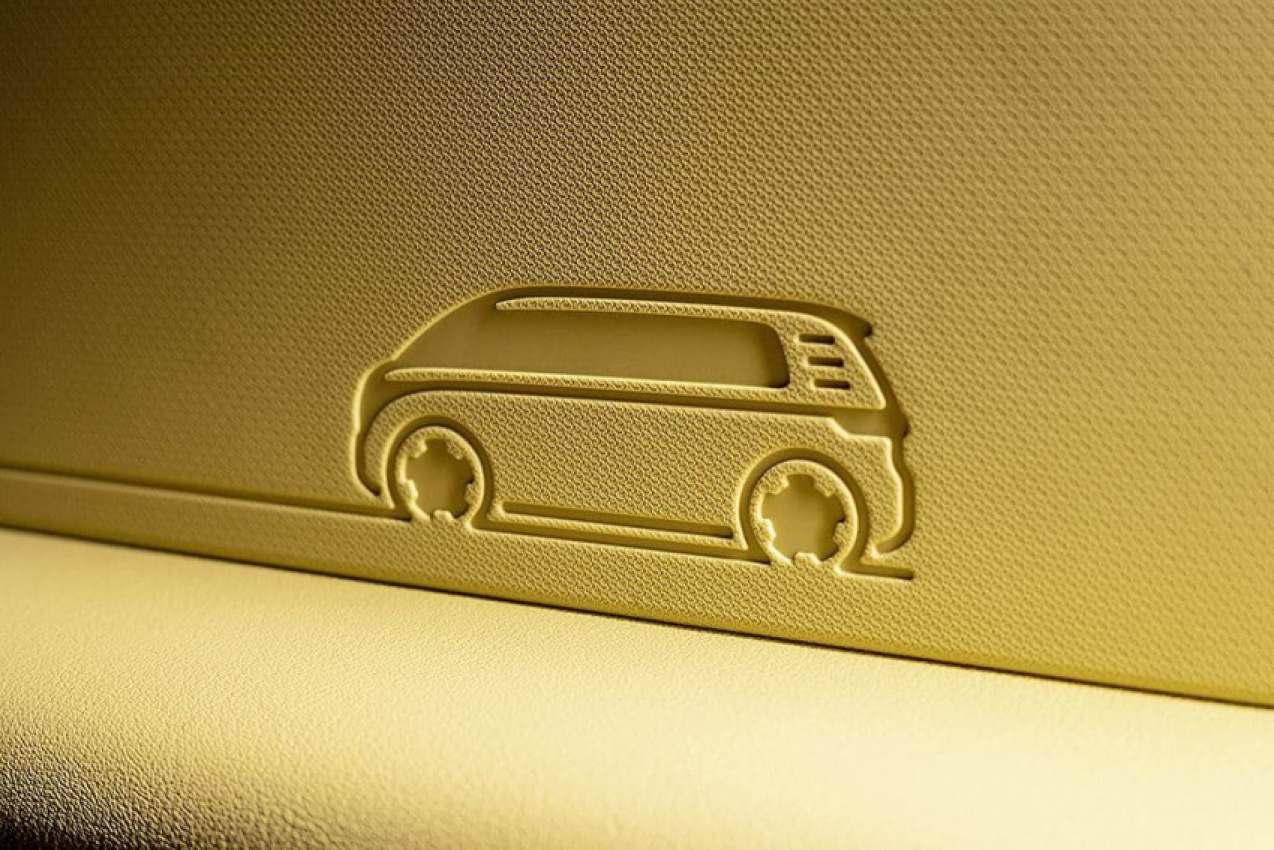 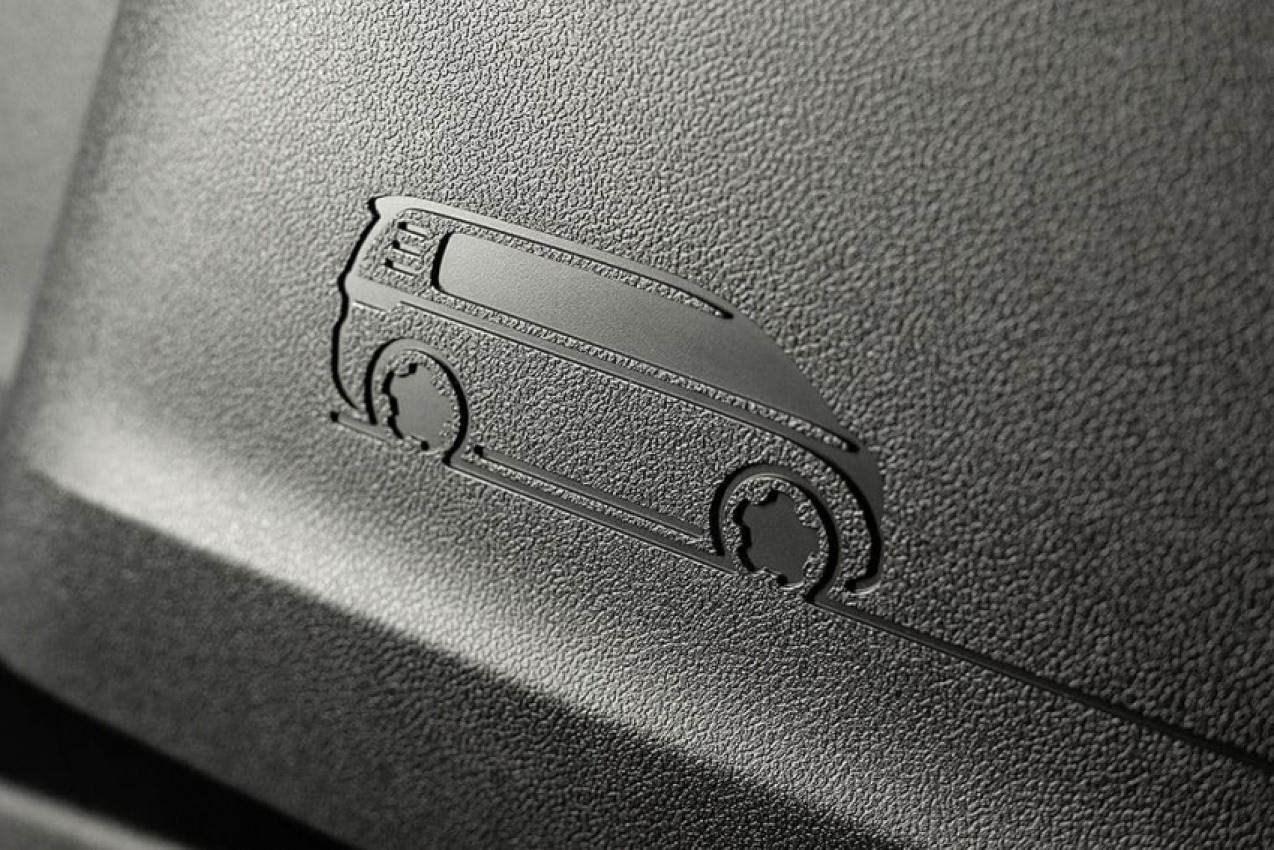 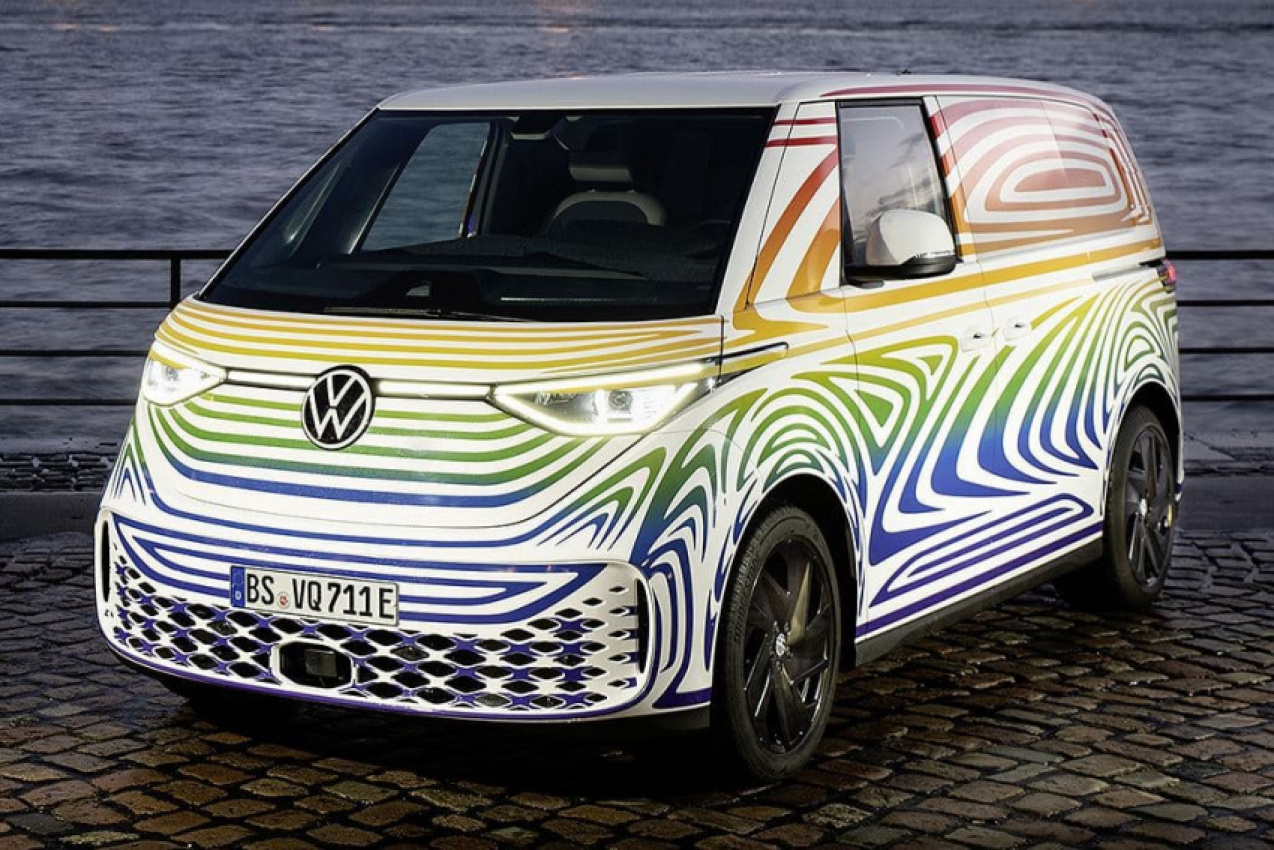 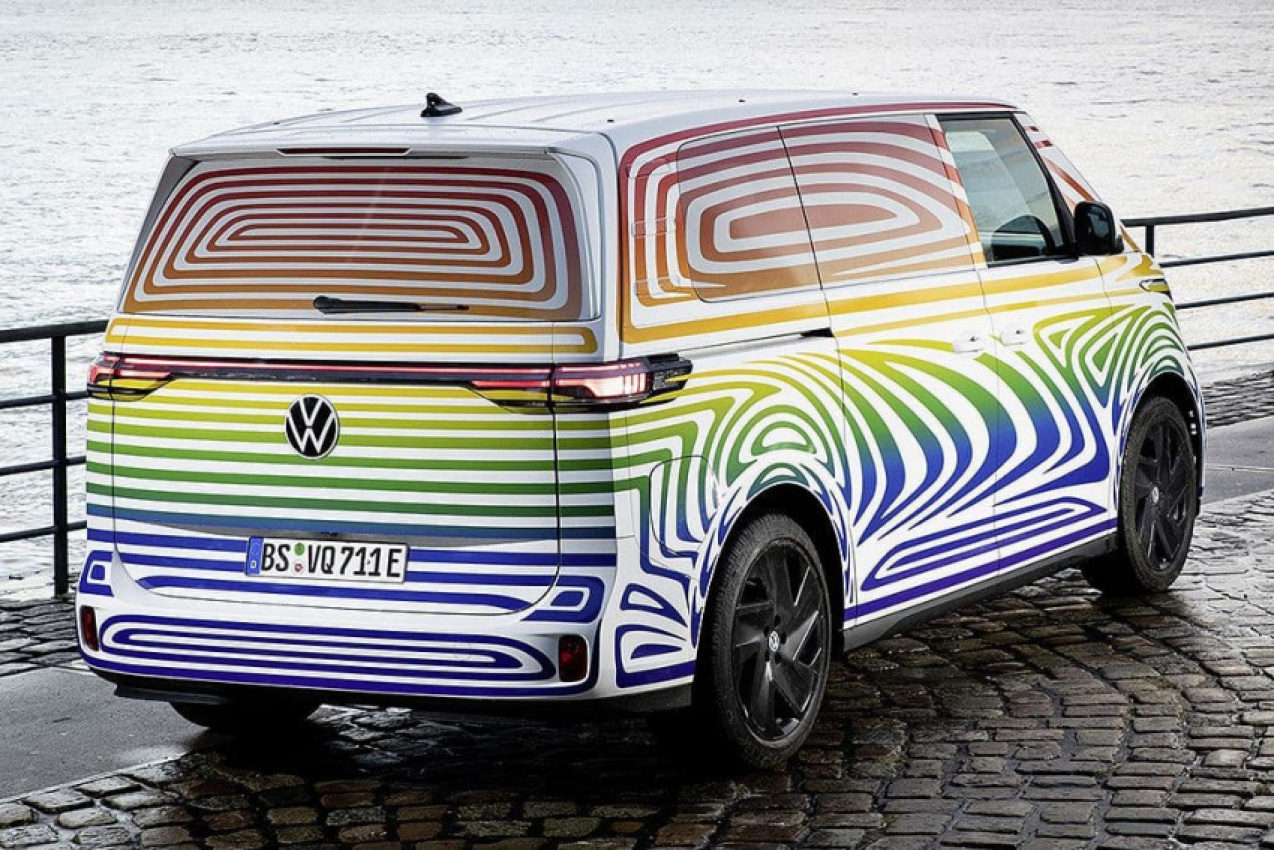 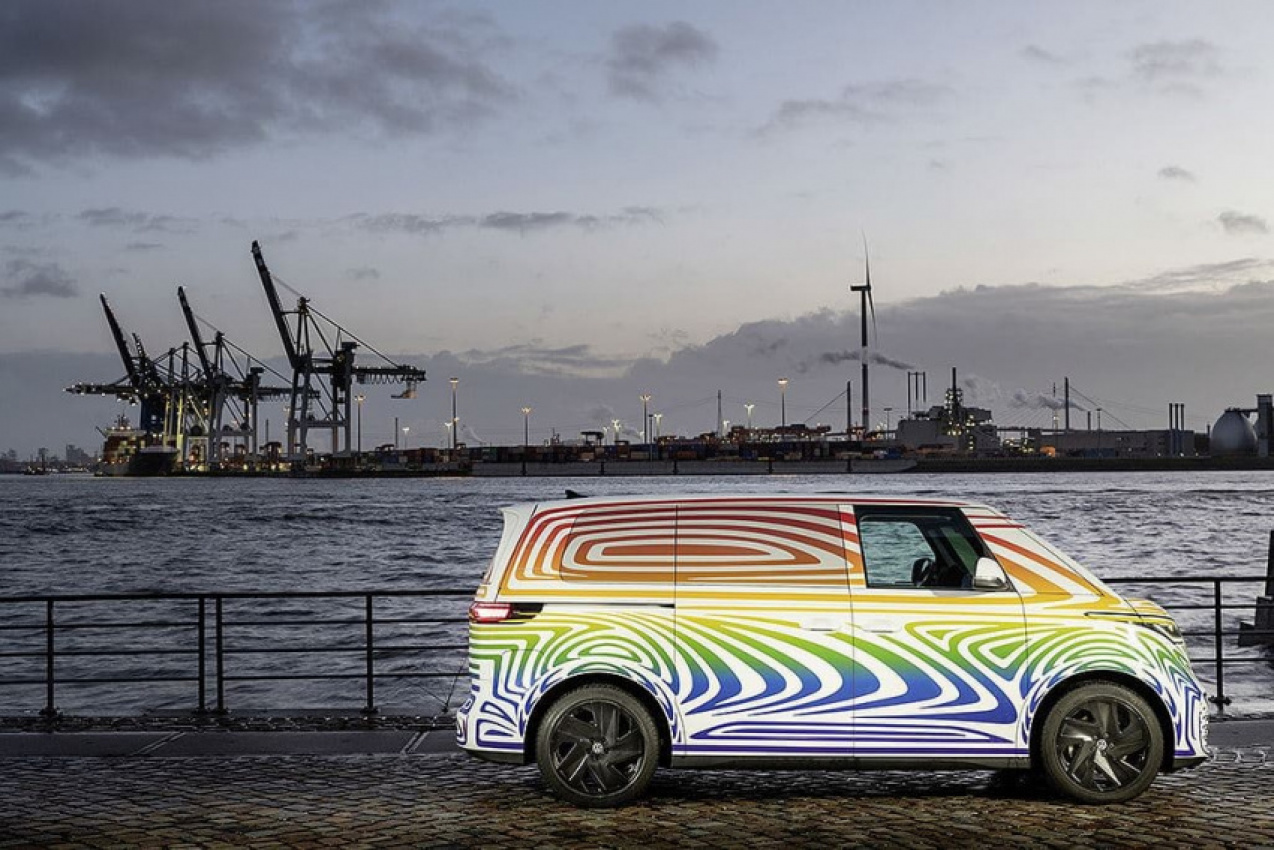 The vibrant and quite literally happy interior of the upcoming 2022 Volkswagen ID. Buzz electric van has been teased two days before its global reveal early on Thursday morning Australian time.

As we reported when we drove a pre-production version of the born-again VW Kombi EV late last month, the Volkswagen ID. Buzz will be offered in both people-mover and cargo van guises offering up to 600km of range.

It’s the interior of the former version that’s now been shown off for the first time in a series of pre-reveal teaser shots, depicting a loud and cheerful cabin awash with decorative ID. Buzz motifs and smiley faces. 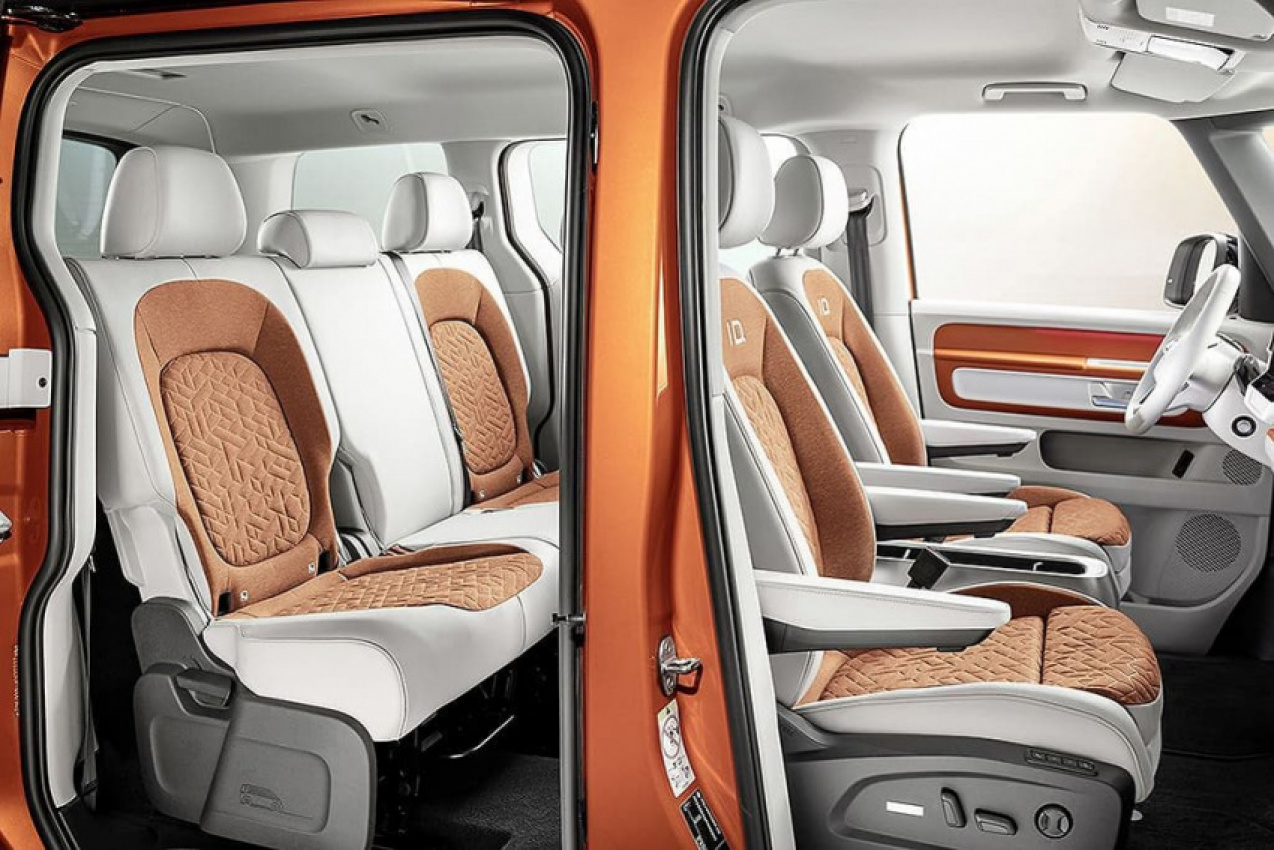 Some of the motifs do actually serve a functional purpose beyond the aesthetic by either covering, housing or signifying the presence of an accessory such as like a bottle opener, ice scraper or USB port.

The cabin in these teaser images has been finished in a two-tone white and orange colour scheme and, as with most modern EVs, Volkswagen has dialled up the sustainability factor to 11.

“Leather and other materials of animal origin do not feature at all and are replaced with substitute materials with similar properties and feel,” said Volkswagen. 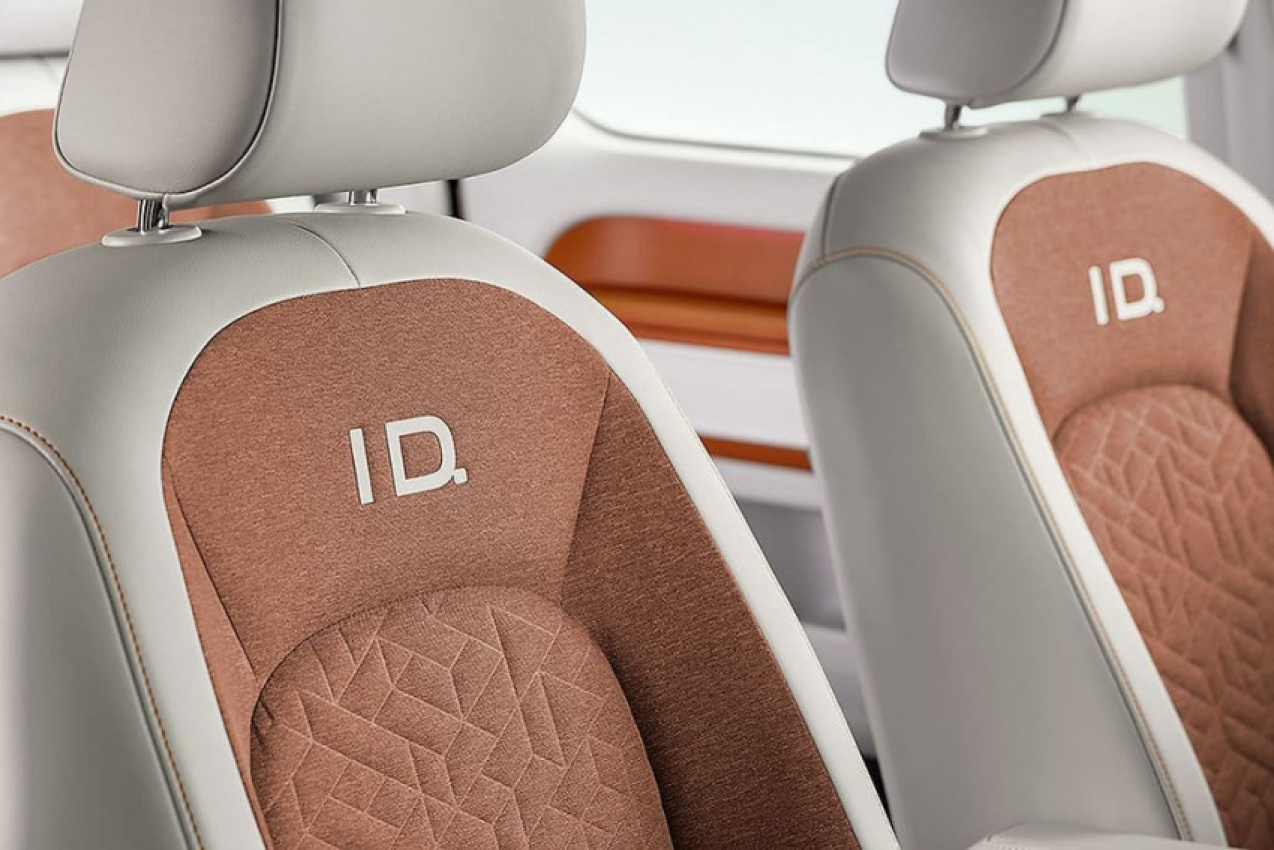 Instead, the ID. Buzz’s cabin materials include polyurethane for the steering wheel, which VW says has the “same high-quality look as leather and a similar feel”, plus ‘recyclate’ materials for the seat trim, floor coverings and headliner.

Once such fabric is made from Seaqual yarn, which Volkswagen says consists of about 10 per cent marine plastic and 90 per cent (recycled PET bottles), reducing carbon emissions by 32 per cent compared to similar products. Meantime, the ArtVelours ECO upholstery used by the VW Group for the first time comprises 71 per cent recyclates.

No 0-100km/h acceleration figure has been announced and for now Volkswagen is launching only the five-seat ID. Buzz people-mover with up to 1121 litres of boot space, and the two-seat Cargo version, which will offer “more than” 3.9 cubic metres of volume in the rear.

A long-wheelbase eight-seat version of the ID. Buzz people-mover will follow in Europe in about six months, bringing a bigger 111kWh battery and 600km of range, but so far none of Volkswagen’s ID electric models – including the ID.3 hatch and ID.4, ID.5 and ID. 6 SUVs – have been confirmed for Australia.

“The addition of the new ID. Buzz to the ID. family is another key step towards fully electrified mobility,” said Volkswagen. 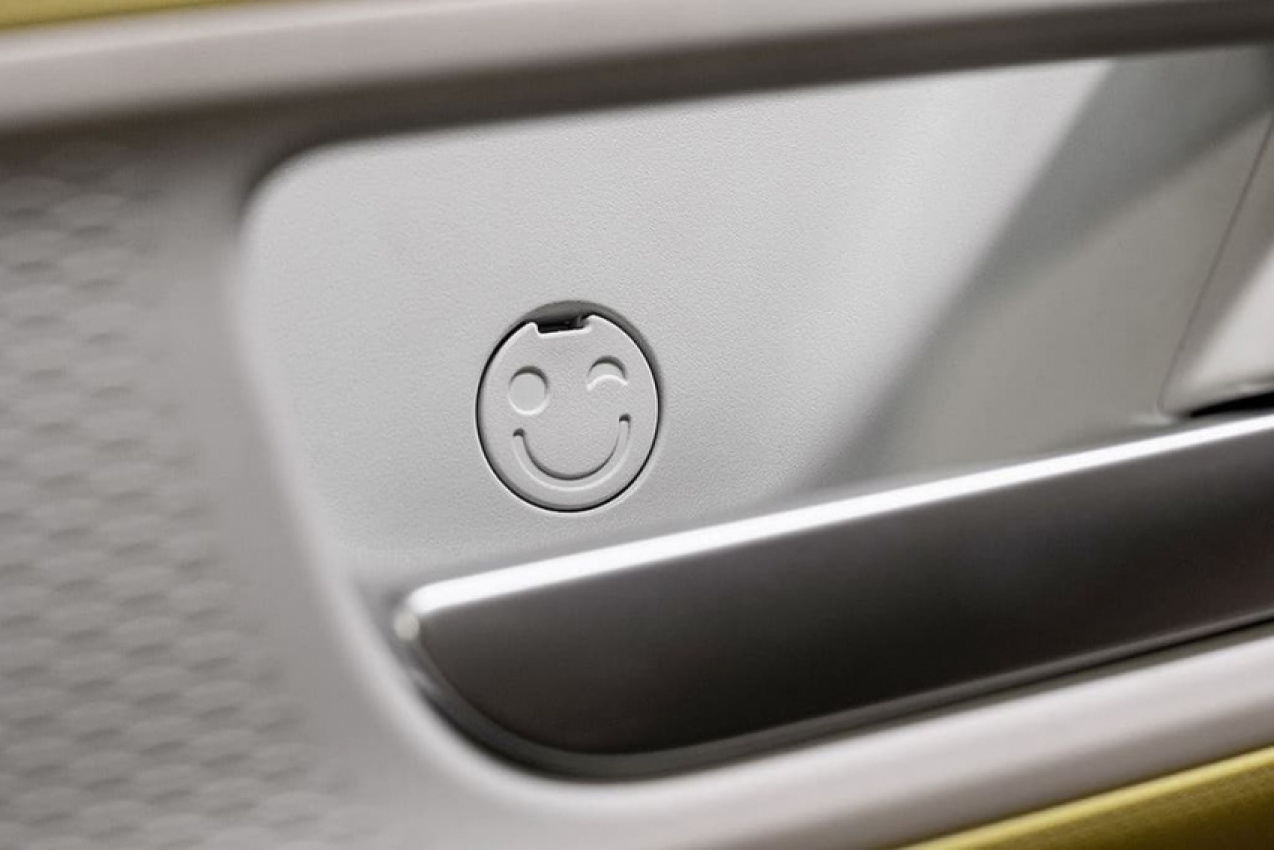 “This development is driven not only by stricter emission values but also by an increasing awareness of the environment and sustainability.

“Here, Volkswagen has implemented a package of technologies and processes to ensure that the two models are among the most sustainable product lines worldwide.”