Car manufacturer Ford has delivered a near-£150million boost to the British car industry with plans to ramp up production of electric vehicle parts at its Halewood plant.

The investment means that from 2024 the Merseyside factory will be making 420,000 electric power units – the motor and gearbox of the car – each year, up from a previous plan for 250,000.

US-owned Ford said that, by 2026, the power units made at Halewood will be used in 70 per cent of the 600,000 electric vehicles it will be selling in Europe. 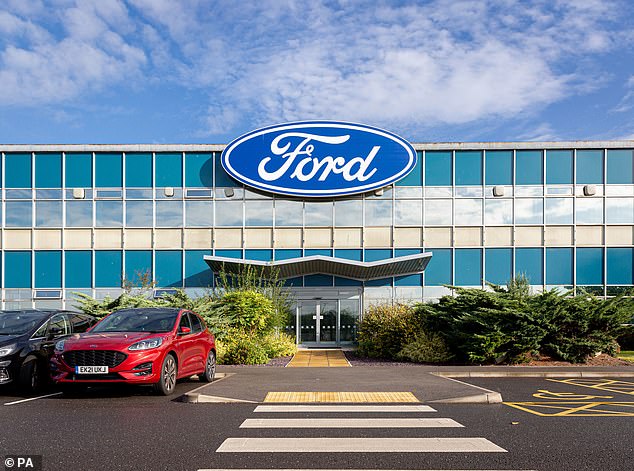 Investment: Ford expects its Halewood plant will be making 420,000 electric power units – the motor and gearbox of the car – each year by 2024

Ford said the investment, which is underpinned by UK government loan guarantees, secured employment for 500 workers.

It adds to a £230million investment in Halewood that was announced last year and comes as the manufacturer prepares to switch to selling only fully electric cars in Europe by 2030.

Tim Slatter, chairman of Ford UK, said: ‘This is a very significant and important part of scaling up for our transformation.’

Ford no longer assembles vehicles in the UK, having closed its Transit plant in Southampton back in 2013.

But it still makes engines at its plant in Dagenham, east London, and gearboxes in Halewood.

The power units, which will now be made there, will each comprise an ‘edrive’ motor and a gearbox, which together replace a conventional combustion engine and gearbox.

They will go into five vehicles which will be assembled at factories in Romania and Turkey: the electric Puma, the E-Transit Custom, the E-Tourneo Custom, the Transit Courier and the Tourneo Courier.

The plans announced yesterday will see Ford inject £125million of investment into Halewood.

A further £24million will be invested in its product development centre at Dunton in Essex. A Government-backed loan of £600million to Ford has facilitated the move.

The money is part of the wider goal of putting the UK at the forefront of electric car development in Europe.

Trade Secretary Kemi Badenoch welcomed Ford’s announcement, saying: ‘Boosting electric car production is key to our strategy to combat climate change and today’s news demonstrates how our manufacturing industry, our exports and our economy will benefit from this transition.’

Britain’s auto sector is racing to transform itself ahead of a ban on the sale of new petrol and diesel cars and vans from 2030.

But there have been setbacks more recently with BMW set to move production of electric Minis, which are currently built in Oxford, to China.

Energy giant Total has become the first major operator to cut North Sea investment as a result of the Government hiking the windfall tax on oil and gas companies.

The French company said it was reducing spending by £100million for next year – a quarter of its planned investment – according to industry publication Energy Voice. Jean-Luc Guiziou, Total’s UK country chairman, said competitive and stable rules were ‘vital to investment in critical energy and infrastructure projects’ to meet energy security needs and net zero ambitions.

The Chancellor last month hiked the windfall tax from 25 per cent to 35 per cent so profits made by oil and gas firms can contribute towards paying for government help with household bills amid rising prices.

Keyword: Ford in £150m boost for the British car industry: US-owned giant to ramp up production of electric vehicle parts at its Halewood plant

MEXICO CITY, Feb 3 (Reuters) – Mexico is gearing up to build several manufacturing hubs for electric vehicles across the country, Foreign Minister Marcelo Ebrard told Reuters, and is in talks with some of the world's top carmakers. The shocks of the pandemic and two years of supply chain ...