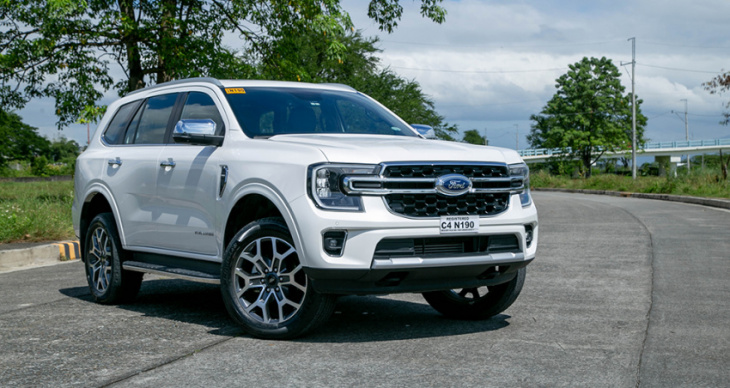 The color doesn't photograph well, but this pearlescent white looks great in the metal. PHOTO BY SIMONN ANG

As an automotive journalist, I’m very fortunate to have a job that affords me the luxury of hopping in and out of the latest and greatest cars to come out, but that luxury can sometimes take a bit of the excitement away from trying out less exotic, everyday cars such as a truck-based SUV.

This profession desensitizes you in a way just because you get to try out so many different things. That being said, good eggs need to shine extremely bright for them to cut through the crowd. And to me, this new Ford Everest is a bright and shiny little egg in the midsize SUV basket. 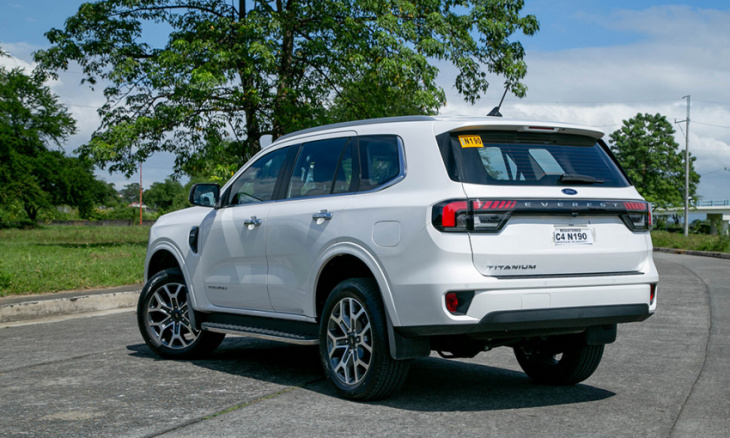 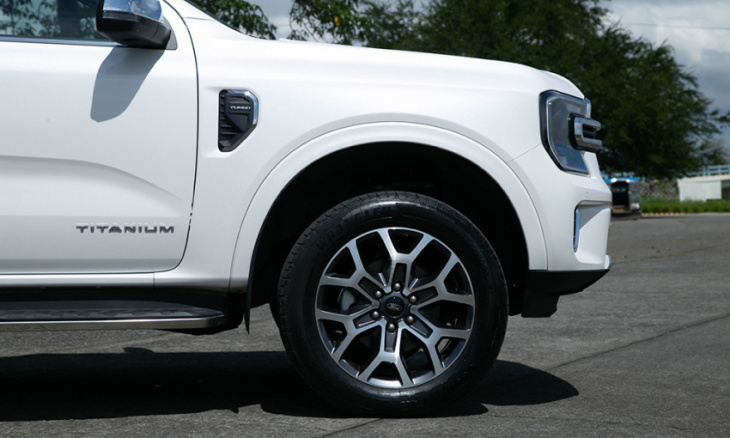 While we do get the flat-nose criticism, we think it looks rather handsome. PHOTOS BY SIMONN ANG

If this new generation’s styling looks like a mere evolution of the previous model’s appearance to you, that’s because this is still based on the T6 platform. The overall silhouette of the vehicle is largely the same, but the body lines are now more contoured and chiseled, and the accents are more angular. It looks as though the old one went to the gym, took a ton of protein powder, and got ripped.

I was surprised at how large this car has gotten when I first laid eyes on it. The track is 50mm wider, and the wheelbase has also been lengthened by the same amount. The outgoing model is no ugly duck, but this new one just looks more even and proportional with the wider stance. It’s pretty tall as well, making other ladder-on-frame SUVs look absolutely diminutive next to it. 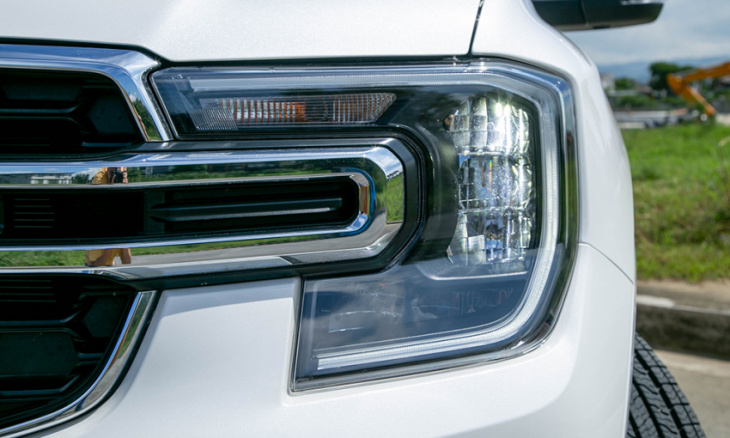 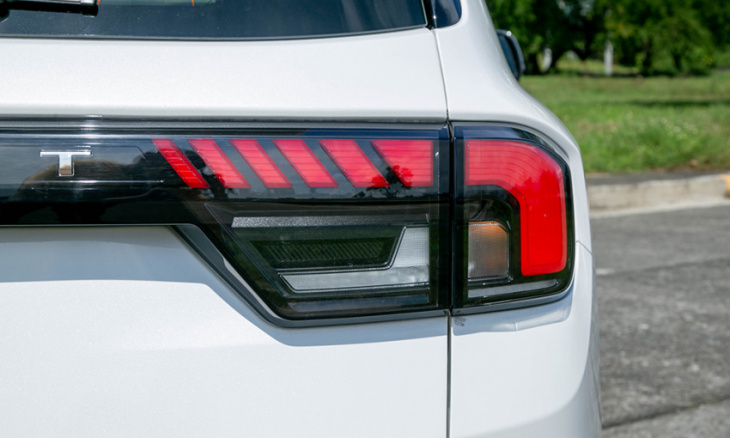 Some have criticized the new face of the Everest and the Ranger, saying that the nose appears flat. And while this is quickly apparent in the metal, the new front end does lend an imposing presence similar to those of the brand’s full-size North American offerings. The rear end has also received a significant redesign. Gone are the “rat ears” of old, and in their place are these gorgeous LED taillamps that just look the business. 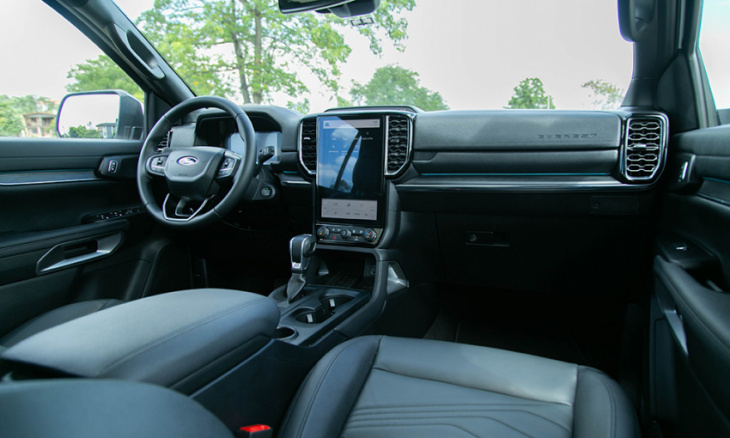 Simple and straight to the point. We approve. PHOTO BY SIMONN ANG

The angular theme continues inside. Where the previous model was more luxurious and upscale, Ford has chosen to go for a sportier, minimalist vibe this time around.

When you step into the Everest, the doors shut with a nice, reassuring thud instead of the old’s rattly click. The interior is simple yet sophisticated at the same time. It has a lot of flat, plain surfaces adorned by elegant accents such as the honeycomb aircon louvres, while ambient light strips run across the dashboard and the door cards to add a splash of color to the otherwise monochromatic space. 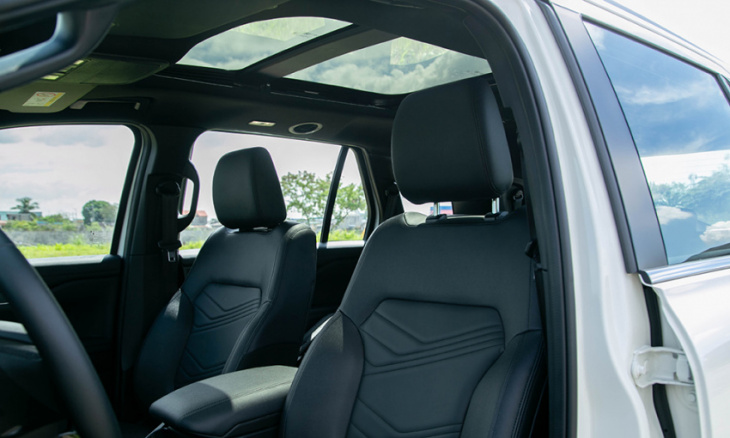 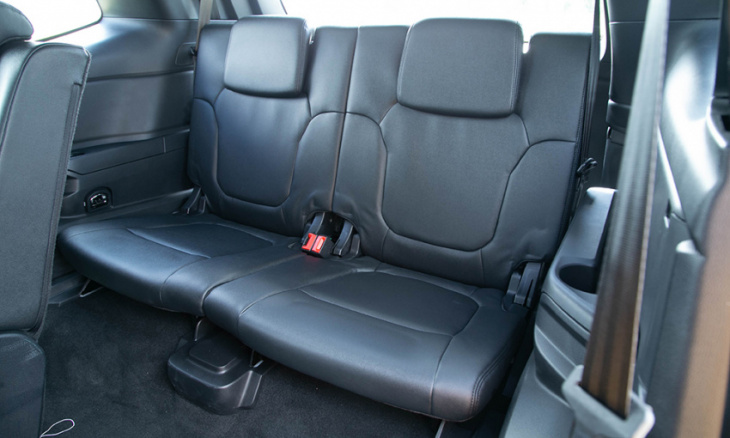 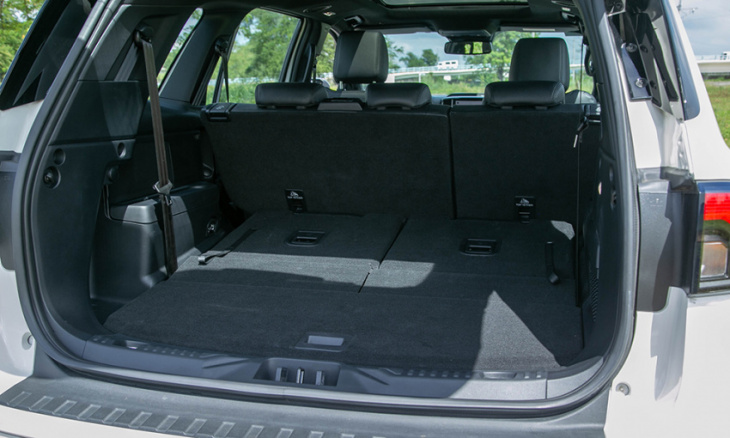 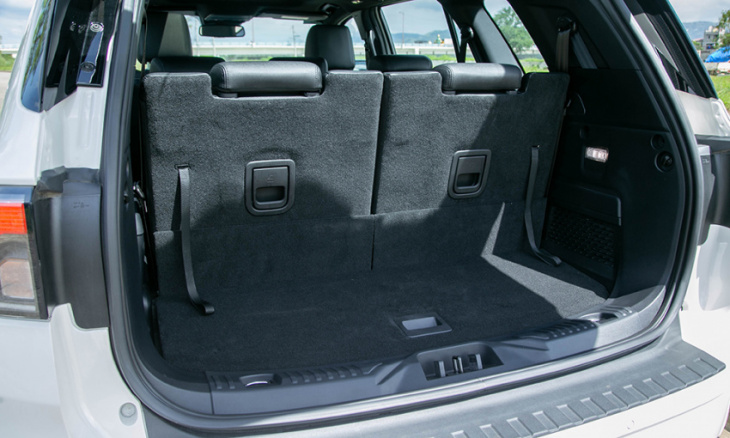 The interior offers a lot of practicality. PHOTOS BY SIMONN ANG

The cabin feels wide and airy thanks to the overall increase in size, and does a good job of insulating its occupants from the noise and chaos of Philippine roads (although there is a good amount of tire roar emanating from the Goodyear Wranglers fitted to this demo).

The seats are well-bolstered and comfortable, and there are oodles of space for every passenger. Overall, no matter where you get to sit, this is a nice place to spend time in. 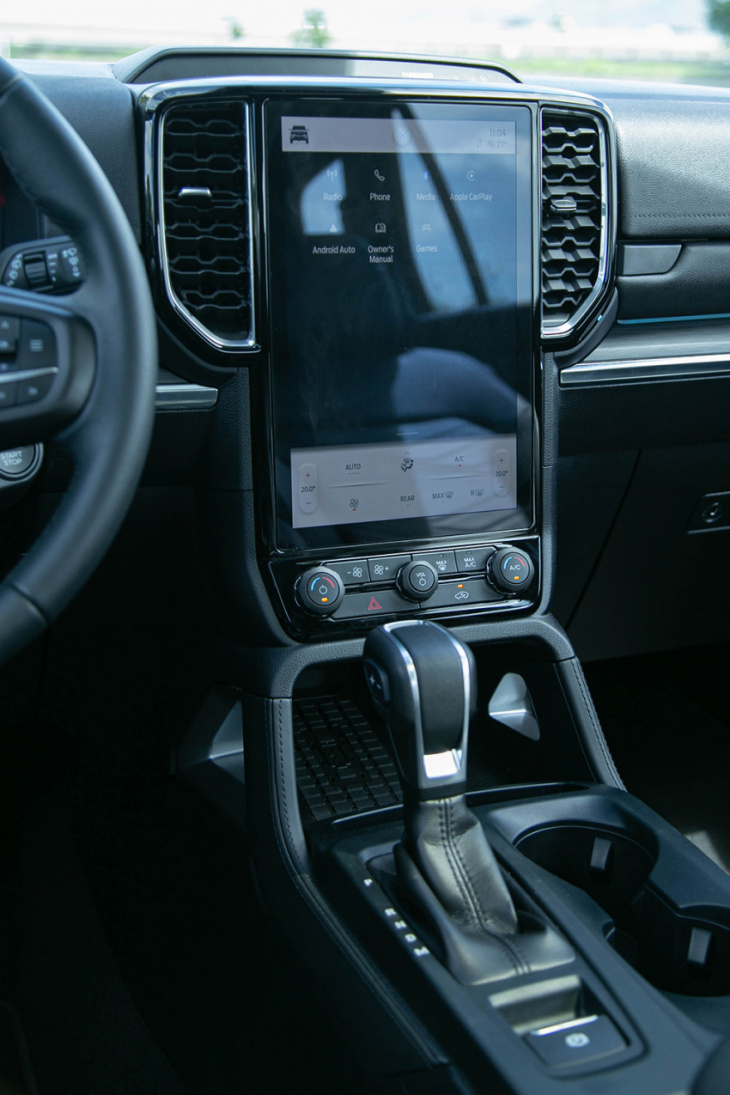 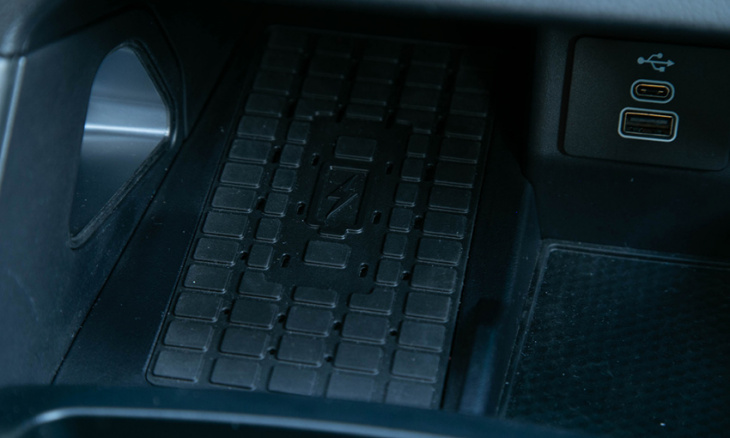 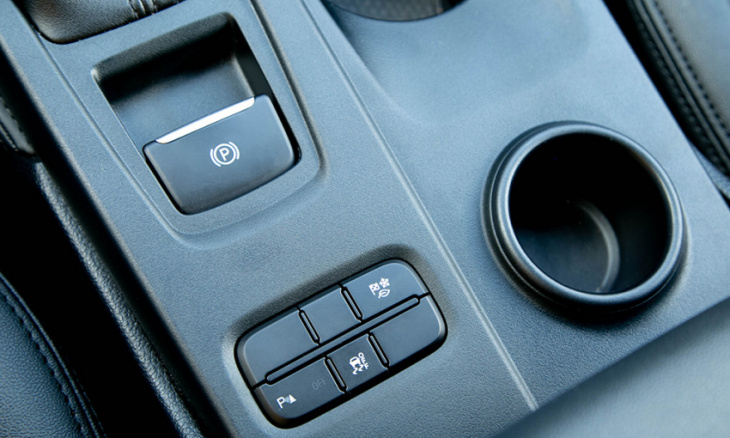 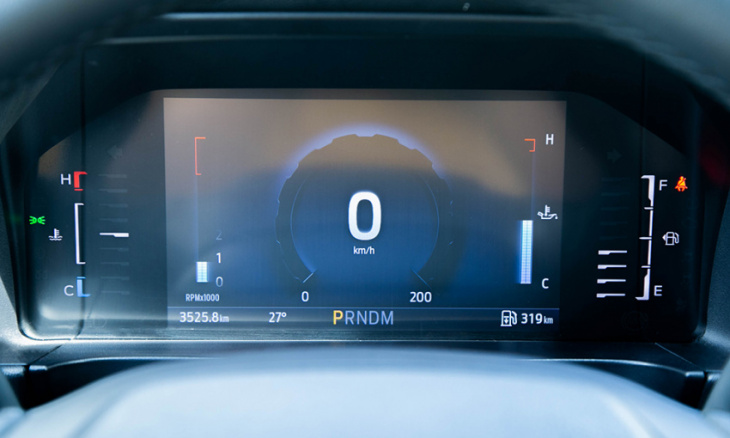 See the top photo. A temperature gauge on the left, and another one on the right. Both are static and cannot be removed. Why, Ford? PHOTOS BY SIMONN ANG

Though it is the best 4×2 Everest you can buy, the Titanium+ 4×2 trim does not get the full electronics suite of the Titanium+ 4×4. So, lane-departure warning, lane-keep assist, blind-spot monitoring, collision mitigation, adaptive cruise control…all that good stuff has been deleted from the top-of-the-line RWD model.

Despite that, however, this is a master class in product planning. Yes, they omitted most of the safety features, but they did retain all of the premium creature comforts you make contact with on every single drive. And that really works to elevate the ownership experience.

It comes with a 12-inch touchscreen infotainment unit capable of wireless Apple CarPlay and Android Auto, as well as a wireless charging pad to go along with it. HVAC controls are integrated into the screen, along with many other settings and functions. The last car I drove that had all these cost more than double this Everest’s P2.179-million price tag.

You also get Vehicle Hold, which holds the brakes at a stoplight to make driving less of a chore. The gauges are also mostly digital now, save for the fuel and temperature gauges flanking the screen. It’s not the most sophisticated digital cluster, but it is legible and straightforward. 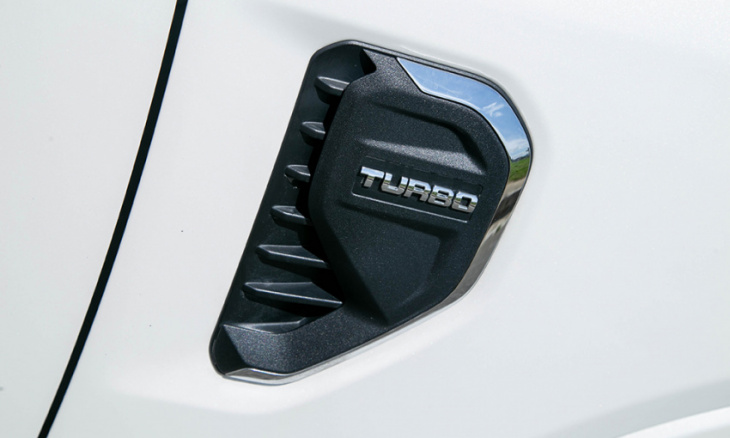 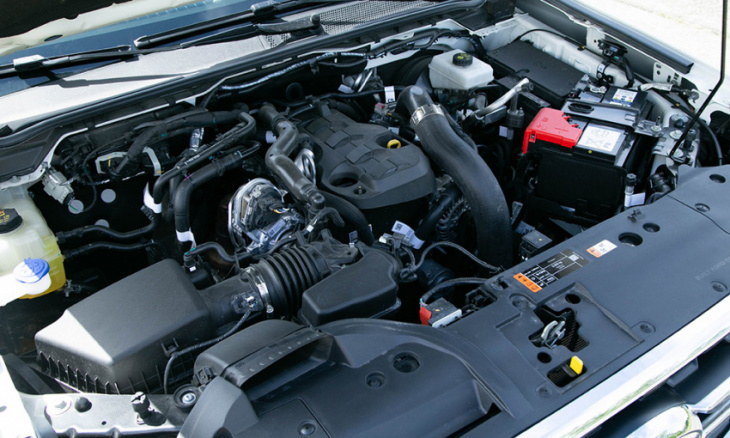 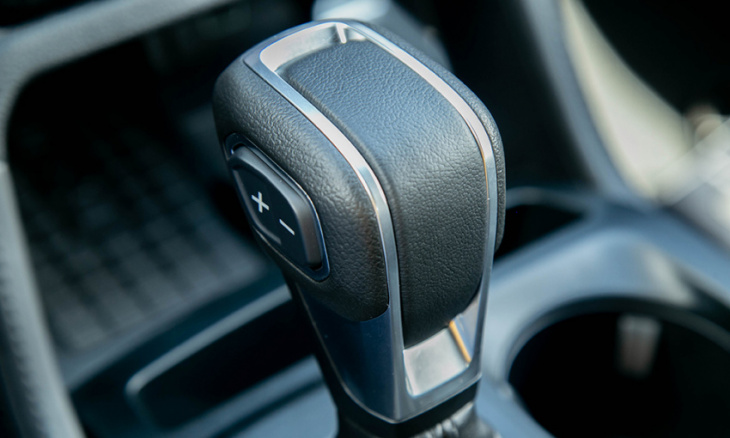 Sadly, the trick shifter that has been making rounds on the Internet did not find its way into this model. PHOTOS BY SIMONN ANG

Sadly, Ford has chosen to gatekeep the 210hp biturbo 2.0-liter engine and reserve it solely for the 4×4 model. And so, the Titanium+ 4×2 has to make do with the single-turbo powerplant that churns out 170hp and 405Nm.

It performs much like the EcoBoost engines found in the brand’s smaller offerings in that it is very punchy down low. It accelerates effortlessly from stop to stop, and is very smooth around town. However, also like the EcoBoost engines, it starts to run out of steam at around 3,000rpm.  There’s ample power available for most situations, but it won’t knock your socks off. I took it up the Marilaque twisties, and the Everest had enough power to climb up at a brisk pace, but given the engine’s power band, overtakes were quite unnerving, to say the least.

The six-speed automatic transmission may seem like a downgrade compared to the old seven- or 10-speed slushboxes of the previous generation, but in practice, it is a welcome upgrade. It gets the job done without the jerkiness of the old model’s tranny, and shifts gears intuitively. If I had to nitpick, I do wish Ford would ditch the +/- buttons and give us proper paddles or a selector on the shifter at the very least.

Driving this around is such a joy. The steering is light, the infotainment system is top-notch, and there are just enough driver aids to help you out without overwhelming you with information and warnings. 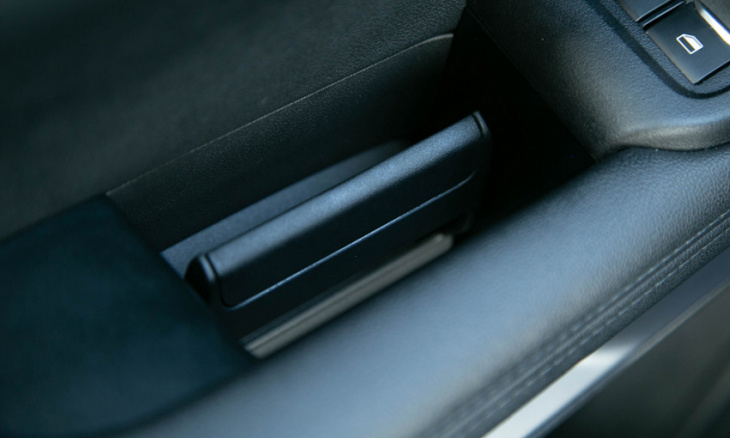 If you find yourself in one of these and you can't figure out how to get out, remember this picture. PHOTO BY SIMONN ANG

The downsides make for a very short list.  For one, the quality of the interior materials could be better. The design is fantastic and modern, but everything just feels a little too cheap. The leather on the steering wheel and the seats have a plasticky quality to them, and the actual plastic panels are rough and hollow, too.

Moreover, the previous model had its fair share of common issues, which I wish had been addressed in this model. In Facebook groups, you will find countless posts of owners complaining of rusted doors, wheel wells, and body seams. Another common complaint is that the interior door handles tend to break off without warning. Ford has rectified this by moving the release behind the door pull. An awkward ergonomic choice, but I do hope it works. I guess only time can tell if these quirks have really been ironed out.

Lastly, while the Everest’s rear end is coil-sprung instead of leaf-sprung as it is on the Ranger, the ride remains to be pretty stiff. I reckon this is largely due to the 20-inch tiis-pogi wheels fitted to the car out of the box. 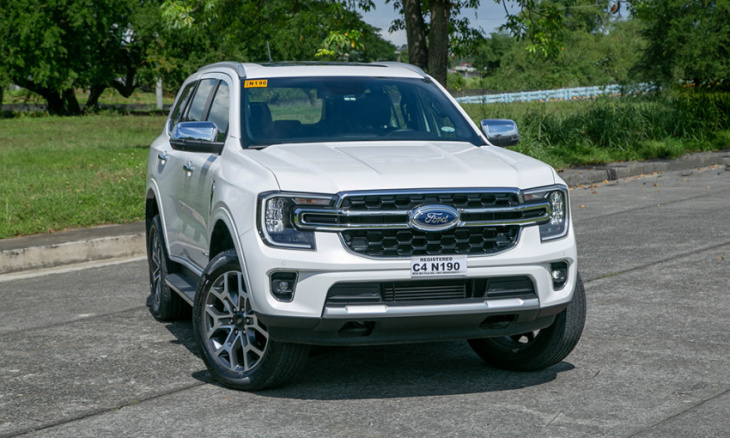 It looks very much like the F-150 from this angle, doesn't it? PHOTOS BY SIMONN ANG

I’m just going to come right out and say it. I loved this car. To be perfectly honest, I found myself asking my wife if we could buy one more times than I am willing to admit. It just has a way of elevating your everyday drive. For what this car is worth, it has no right to be this good. Cheap choice of leather aside, it genuinely feels like a budget-friendly Range Rover. What more can you ask for?