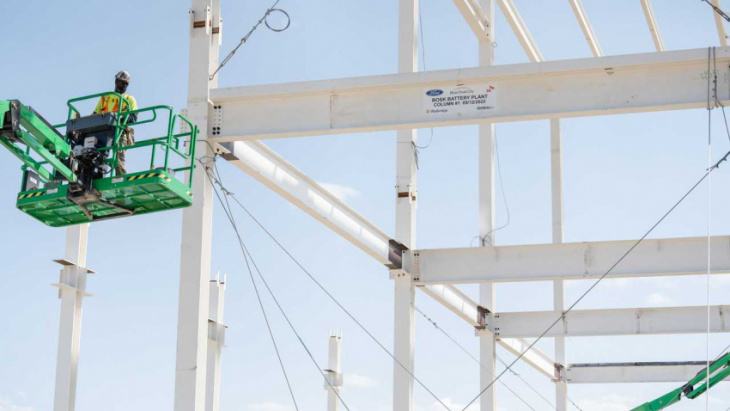 A brand new Ford factory is under construction in western Tennessee that will be unlike anything else in the company’s 119-year history. Dubbed BlueOval City, when it goes online in 2025 it will be the largest and most advanced Ford manufacturing complex of them all. It will play a vital role in the automaker’s electrified future, building batteries and an all-new electric truck that, according to Ford, will be “revolutionary.”

Before this mystery truck comes to fruition, the plant needs to be built. Preliminary work started in March, preparing the sizable chunk of land for the massive construction project. That alone meant moving 4.6 million cubic yards of soil and laying 370,000 tons of stone. Now, steel is in the ground that will serve as the foundation and bones for BlueOval City – a sprawling campus that will encompass six square miles.

“We are building the future right here in West Tennessee,” said Eric Grubb, Ford’s director of new footprint construction. “This facility is the blueprint for Ford’s future manufacturing facilities and will enable Ford to help lead America’s shift to electric vehicles.”

Such a mammoth undertaking certainly comes with a hefty price tag, and in this case, we are talking billions. Specifically, Ford is investing $5.6 billion in the plant, and when it goes online in 2025, the company will add 6,000 new employees to run it. If all goes according to plan, BlueOval City will play a crucial role in Ford’s goal to build 2 million EVs annually by the end of 2026.

Batteries will be needed to make that happen, and that’s a primary mission for the facility. But we suspect Ford’s new truck is of greater interest to vehicle shoppers. Ford CEO Jim Farley offered our first clue on this next-gen truck, teasing something “different than this one” at the launch of F-150 Lightning production in April. With Chevrolet and Ram preparing electric trucks that deviate significantly from their internal-combustion counterparts, it’s quite possible Ford is cooking up something similar to sell alongside the F-150.

Looking for more Ford content? Check out the latest Mustang and other recent vehicle debuts in the Rambling About Cars podcast, available below.

Keyword: Ford Begins Construction On Its Largest Manufacturing Plant Ever