The Mustang and Camaro forums are abuzz with posters complaining the just revealed 2024 Mustang looks like a Camaro. Do you feel that way too? Let’s take apart the Mustang’s design, and see if you agree, or not.

We will say that the upcoming Mustang has eliminated a lot of the excess body sculpturing and generous surface crown that the Camaro has featured for years. But the simplification of the form doesn’t mean it looks like a Camaro. When you look at the first Mustang, it too kept things clean and simple.

Let’s start with the Camaro and Mustang profiles

Taking a look at the Mustang and Camaro profiles, you start to see major contrasts. The emphasis of the Mustang’s top arches up quickly then tapers all of the way to the back in its classic Fastback style. Chevy’s Camaro has always had a coupe-like profile. That means it has a more pronounced slope that ends before meeting the back of the car.

It is also flatter, with less visual tension than the Mustang. The 2024 Mustang top quickly elevates and then almost immediately slips down. So overall, both the Mustang and Camaro make use of their original profiles from the very beginning.

One thing that may seem similar is the sharp crease of the rear fenders, and how it blends into the body right before the door shut line. They are very similar. But what came first, the Camaro’s or the Mustang’s? Looking back, that feature shows up on the 1969 Boss 302. It was the only offering that year without the phony scoop in the rear quarter panel. It was then adapted across the entire fastback line in 1970.

Camaro has it too, and right from the beginning in 1967. But the way it transitioned into the C-pillar created a separation between the quarter panel and top. The blending of the two didn’t happen until the 1970 ½ second-gens. And even then it died off well before the shut line. Chevy kept it that way through the third gen and eliminated it altogether for the fourth gen.

Do you see similarities or differences between the Camaro and Mustang? 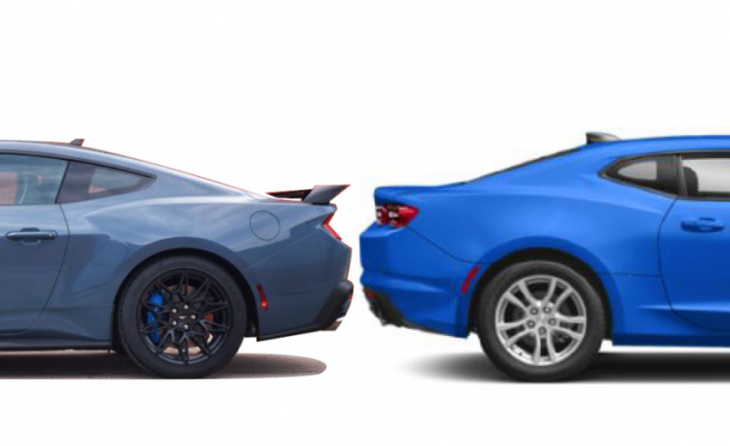 But the same can be said for many years of the Mustang series. So to us, the feature really has no ownership but is handled very similarly for both now. Let’s say it’s a tossup and move on to more distinctive differences. But one difference that is distinct is the side DLO.

Also, we like the wheel opening sizes on the 2024 Mustang versus the smaller ones for the Camaro. It looks more aggressive and makes large-diameter wheels bling a bit more. And the Mustang’s rockers are lower than the Camaro’s, for a fuller bodyside and sense of being lower.

From the front, the differences are more pronounced In the front, the differences between the two pony cars are vastly different. Yes, the new Mustang has flattened out its previous smile, so it takes on Camaro characteristics. But the squinty headlights remain distinct on the Mustang while tied into the grille on Camaro’s. The larger openings are also more distinct on the Mustang versus the Camaro. And the iconic grille opening with the prancing Mustang has remained a Mustang hallmark from the beginning.

In the rear, there are more similarities than differences between the two cars. Of course, both carry their signature taillights. But the Mustang has dropped the black area between the taillights to go with the body color. That’s one similarity. The other is the lower valance Both are of a similar design, and both are black plastic. The only deviation is it is placed higher on the Mustang relative to the Camaro. But carrying over each car’s distinctive taillights should leave no doubt which is which.

So we’ll be ecumenical and say each brand’s differences should help to differentiate the two. But there are surprising similarities. With 2023 or 2024 (plans vary) being the Camaro’s last year of production, it won’t matter much anyway. Both pony cars should be carried over into the EV era. We know that’s Ford’s plan. As for Chevy, it is keeping mum about future product plans.

Keyword: Does the 2024 Ford Mustang Really Look Like a Chevy Camaro?