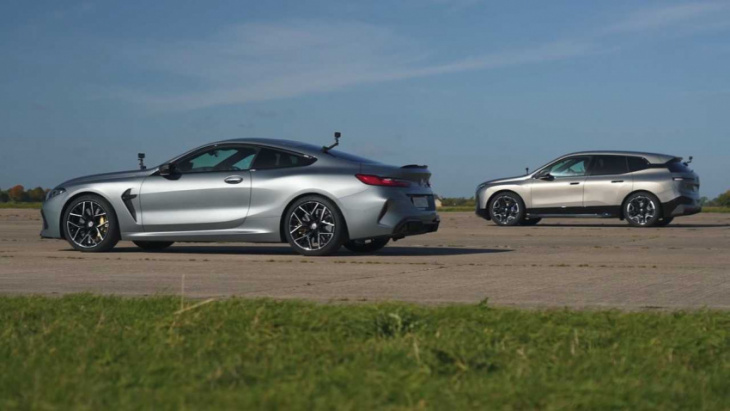 BMW’s current portfolio consists of vehicles with all kinds of powertrains – gasoline, diesel, hybrid, electric, and hydrogen. We are living in an era when different groups of consumers find different types of drive units more suitable to their needs, and there shouldn’t be a surprise that some will go for a twin-turbo V8, while others will prefer a battery-powered system. The good news is that BMW’s model range has plenty of pretty fast vehicles regardless of the powertrain type you are most interested in.

This new drag race from Carwow is here to show us two of the fastest machines the Bavarians currently sell in action. The M8 Competition and iX M60 cannot be more different – one is a grand tourer with performance aspirations, while the other one is a large family hauler with a zero-emissions powertrain. Let’s compare the numbers and see which one has an advantage before the race begins.

Under the hood, the stylish coupe has a 4.4-liter twin-turbo mill with 625 horsepower (460 kilowatts) and 553 pound-feet (750 Newton-meters) of torque. An eight-speed torque converter automatic sends the power to all four wheels and a launch control function helps with the acceleration from a standstill. The four-seater weighs in at 4,354 pounds (1,975 kilograms).

Against it, the iX in M60 trim uses a dual-motor fully electric powertrain with a 105-kilowatt-hour battery pack (our colleagues from Carwow list the battery capacity in kilowatts, which is not correct). The drive system generates 619 hp (455 kW) and 811 lb-ft (1,100 Nm) of instant torque. It’s significantly heavier than the M8 Competition, however, tipping the scales at 5,697 lbs (2,584 kg). So, to summarize – the electric SUV is slightly less powerful but has a higher torque.

After that introduction, it’s finally time for drag racing. The video features several different battles in which the cars are in different driving modes. You are surely going to be very surprised by some of the results, so make sure to watch the video until the end.