What a weird way to sell this toy. 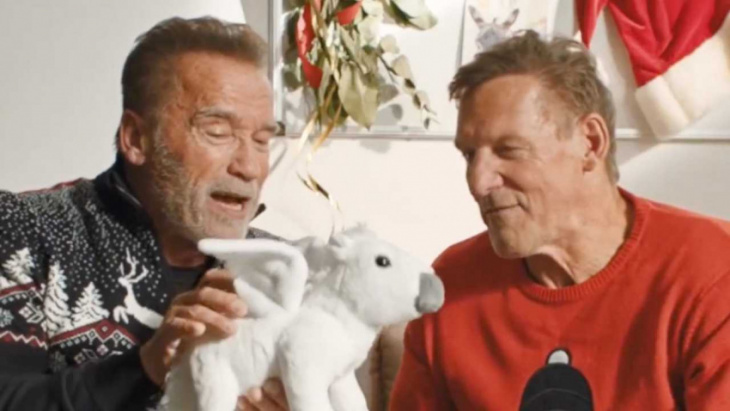 Think back to February 2022 when Arnold Schwarzenegger and Salma Hayek starred in the BMW Super Bowl commercial advertising the iX EV. A brief gag in that spot was that Schwarzenegger, playing the Greek god Zeus, owned a tiny Pegasus as a pet. The German brand was proud enough of this little, mythical creature to make a plush out of it. Now, the company got the former Governator to promote the toy on Instagram.

Actor and bodybuilder Ralf Moeller appears with Schwarzenegger in the video. He had a small role as the Greek god Poseidon in the Super Bowl ad.

The video is bizarre. As if Schwarzenegger and Moeller selling a plush Pegasus isn’t weird enough, they also whisper the whole time because the clip is supposed to have an ASMR effect.

The guys slowly unbox the Pegasus. After opening the outer box, there’s another package inside. Listen closely to hear Schwarzenegger hit to the beat of the Terminator theme on the outside of the package.

Schwarzenegger takes the plush Pegasus out of the inner box. He does an admirable job acting like ley likes this toy. The winged horse flies through the air, and Arnold even kisses it.

If you want your own Pegasus plush, BMW charges €49.00 for one in its European store. Motor1.com reached out to the automaker about availability in the United States.

BMW’s 2022 Super Bowl commercial told the story of Zeus and Hera, played by Salma Hayek, leaving Mount Olympus and moving to Palm Springs, California. In the mortal world, Zeus got bored until Hera bought the family a new iX EV. They took a ride in it while singing along to the Eddy Grant song Electric Avenue.