You can’t deny a choice like this well-loved nameplate 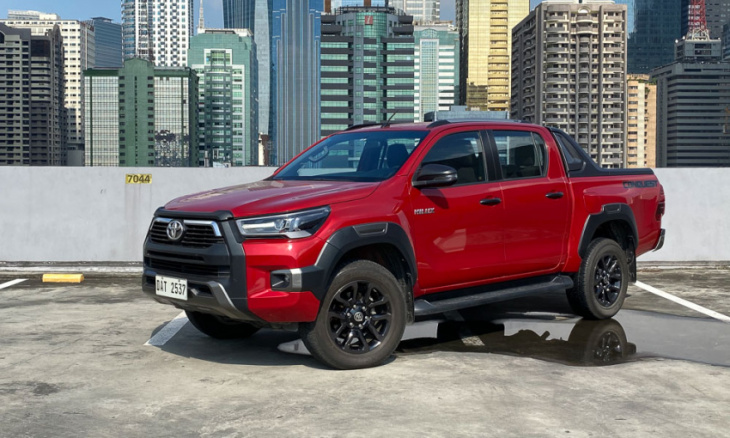 Many have a soft spot for the form factor due to its utility and appealing looks. PHOTO BY JASON DELA CRUZ

Lately, my wife and I have been having enjoyable conversations as to what our next car should be. It’s quite a wide spectrum. Of course, basic sports cars such as the Toyota GR 86, the Subaru BRZ and the Mazda MX-5 are omitted from the short list. However, performance is still very much in mind with me, at least. That said, I’m swooning over the Subaru WRX Wagon. I simply love fast wagons—performance and practicality in one car. Alas, it’s not easy to justify at P2.7 million.

Then, there are the usual suspects: crossovers. The Corolla Cross is a top pick. The wife’s family has always had a Corolla, and I think it would be a nice tribute to carry on with the nameplate, in a more practical package. She does like the Suzuki Jimny, but sensibility always kicks in. We can talk about this car or that, but there’s no denying the pickup truck. It’s just so useful. With manufacturers trying to outdo each other, competition is tight among the players.

High on our list are the Mitsubishi Strada, the Nissan Navara, and the Mazda BT-50 for a compliant ride and overall package. Hard to refuse the Toyota Hilux, though. The name is simply too strong, and car enthusiasts like me appreciate its value—from playing with my Tomica miniature to that famous video proving its indestructibility staying in my memory. How can you not want one, really? 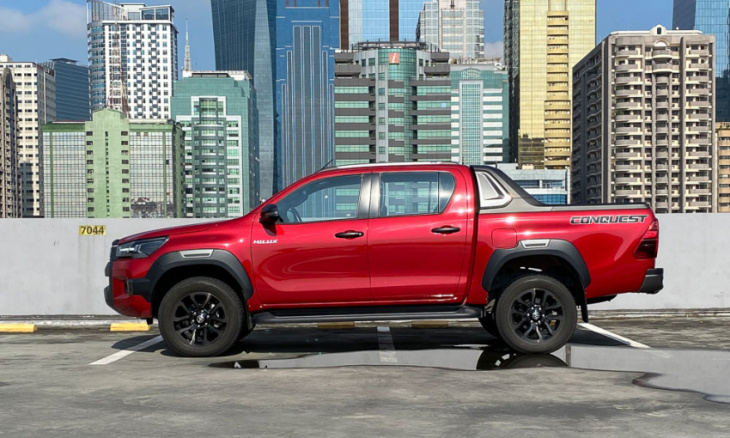 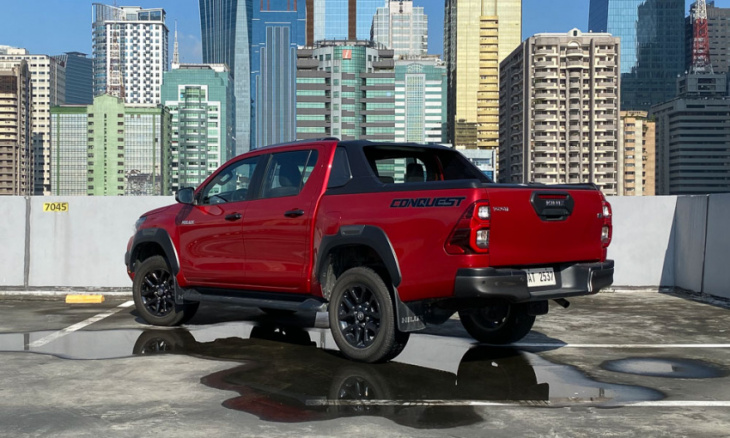 There's no need to fix something that isn't broken, like the Hilux's styling. PHOTO BY JASON DELA CRUZ

I last drove the Hilux in 2019. Before that, I had tried it out in 2015, when the current generation was unveiled. Both times, I found the ride harsh. But since it’s a name that sticks in your head, I thought I’d get reacquainted with it, considering that I’ve been sampling the other pickups recently. I still find the ride to be firm, but this time around, it’s tolerable. 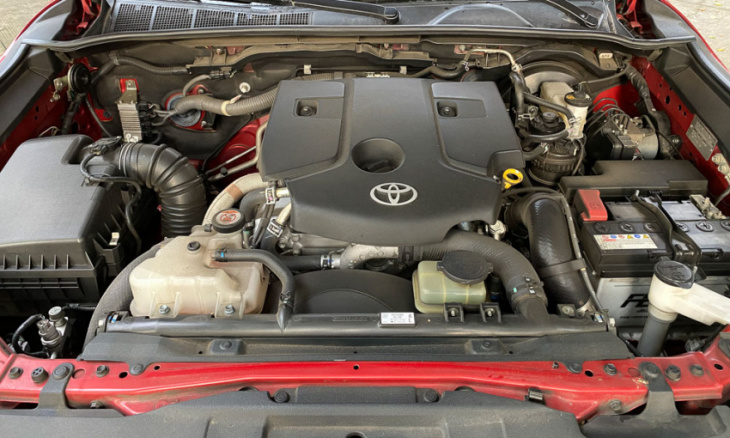 The larger 2.8-liter 1GD-FTV has 204hp and 500Nm for all your workhorse needs. PHOTO BY JASON DELA CRUZ

Perhaps I’m not denying the overall value of the Hilux. I keep thinking this is a good truck to have, especially since I’m the type to keep cars for a long time. And you know what they say about Toyota—parts available everywhere.

What I have here is a 2020 Hilux Conquest 4×4 (the later version features a 360° camera). Pickups with macho trims have been quite the attention-grabbers. The Conquest actually started in 2018. It had bold “CONQUEST” lettering on the tailgate and a sports bar on the bed. 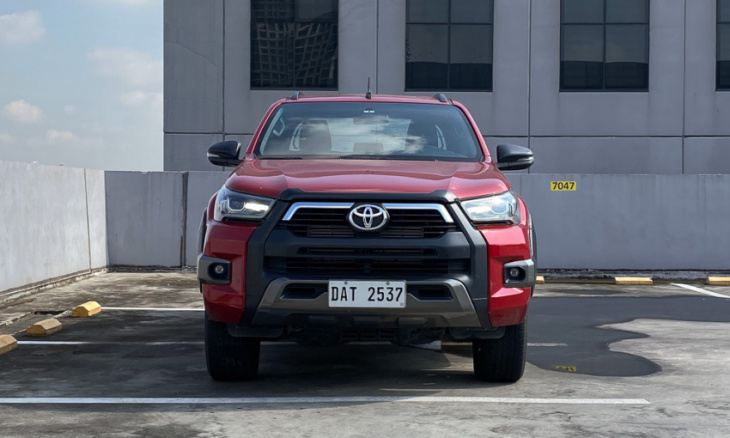 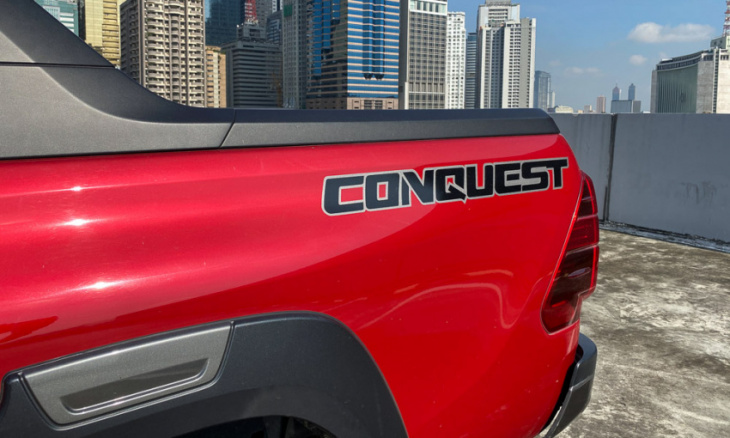 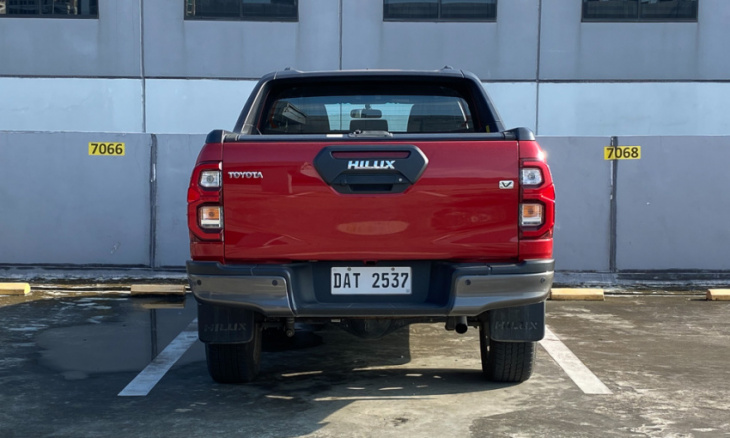 The Hilux Conquest has some 'pampapogi' parts that the author has no need for. PHOTO BY JASON DELA CRUZ

Now, it has a more eye-catching grille and scuff plate, wheel-arch cladding, roof ornament, a fancy sports bar, and Conquest badging on the sides. If anything, I do like the wheel design. This tester is finished in Emotional Red, which costs an additional P20,000. It does look good, and my wife likes red for a truck. 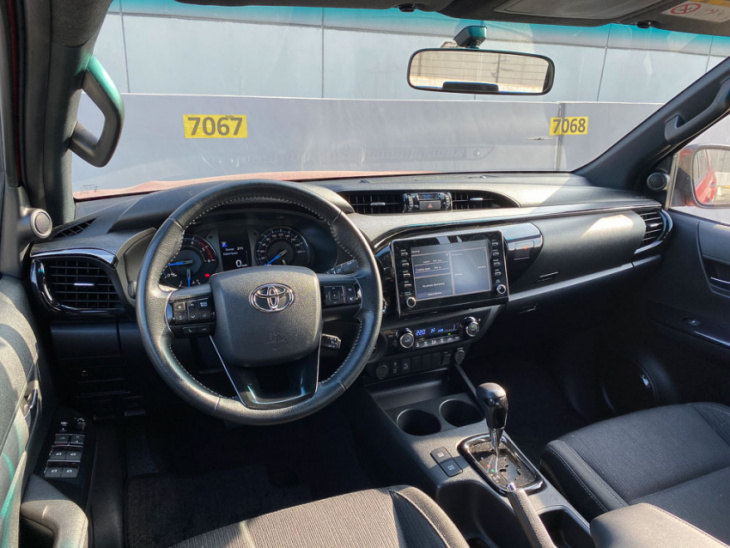 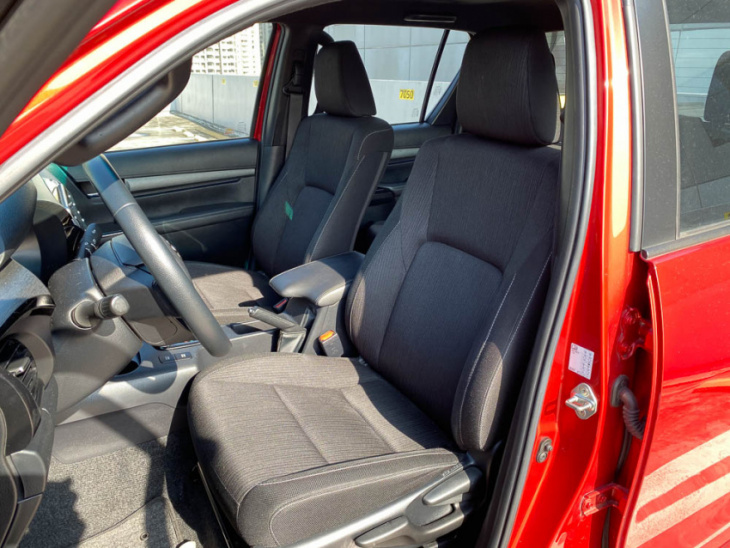 Thankfully, the Hilux has a simple yet functional cabin. PHOTO BY JASON DELA CRUZ

Inside, it’s the current-gen Hilux as we know it. Dark gray with blue dials and blue mood lighting. Thankfully, there’s no tacky “Conquest” embroidery.

Pickups with a rugged-appearance package (which is not to everyone’s liking, including me) are a way of upselling the most expensive trim. Moneymakers, basically. I have the same sentiment with the Navara—I prefer the simpler VL over the Pro-4X. Even the Strada GLS is offered in manual transmission only, and one would be compelled to go with the Strada Athlete if he or she wants an automatic. 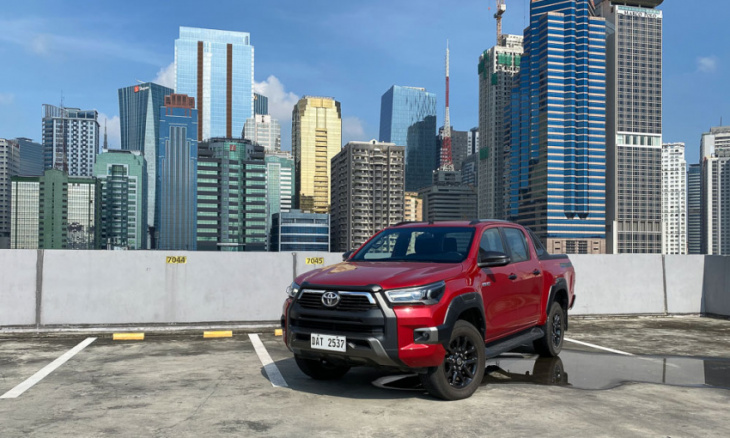 Unfortunately, these macho trims look to be the norm for top-of-the-line pickup trucks. PHOTO BY JASON DELA CRUZ

The Hilux’s 4×4 G variant was the sweet spot for me. No cladding and none of those fancy bits. Just a straightforward pickup. Too bad it was axed two years ago. If you want a 4×4, you’ll have to go with the Conquest, which costs P1.919 million for the AT and P1.844 million for the MT.

These macho trims are the direction now. A simpler-looking Hilux, however, is not a lost cause. I’d have the sports bar and the “Conquest” badging taken off. That way, it looks cleaner. Less is more.

Keyword: A pickup truck like the Toyota Hilux is a handy vehicle to have

Sized similarly to the Toyota Corolla and Tesla Model 3, the bZ3 is powered by BYD's Blade LFP battery technology.

Season 5 of the Toyota GR Festival Vios Challenge drew to a close last weekend, in the most dramatic fashion possible – the overall championship title in all four classes would be decided in the very final 20 laps of their respective races at the Sepang International Circuit. While ...

** This article is published on WapCar Community, representing the opinion of users. Click the link below to enter the community for car enthusiasts in Malaysiahttps://forum.wapcar.my/ Basic information of my car: PRIUS 1.8 LUXURY ZVW30 Reasons why I bought this car Before i bought my prius i was driving a ...

Launched in January this year, the Toyota Corolla Cross Hybrid is an interesting proposition if you’re shopping for an SUV. Sure, the Corolla Cross Hybrid’s interior may be a little bit dull compared to its peers, but its hybrid powertrain does help you to save on fuel. It is ...


View more: Video: How does the Toyota Corolla Cross Hybrid save you fuel?

Australia's Toyota Hilux GR Sport may get the same 2.8-litre turbodiesel; to debut second half of 2023

Australia's Toyota Hilux GR Sport may get higher power output; to debut second half of 2023