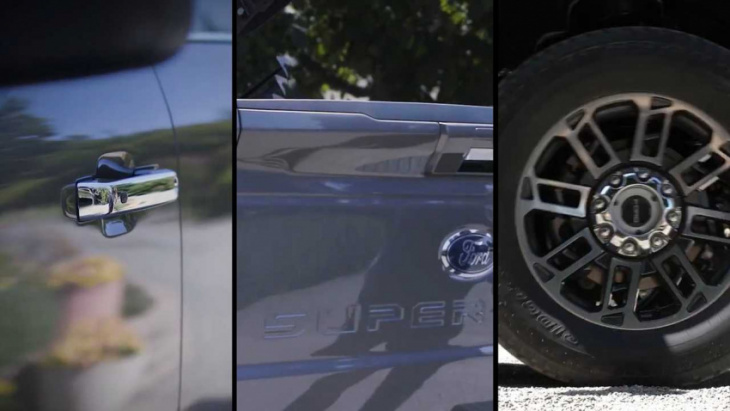 After unveiling the new Mustang earlier this month, Ford is about to take the wraps off an entirely different vehicle developed for work rather than play. The 2023 Super Duty lineup is debuting on KenTRUCKy Day, which is a real thing proclaimed by Kentucky Governor Andy Beshear. The event is organized to take place at Churchill Downs, home of the Kentucky Derby, where the F-250/F-350 will break cover later today to fight Chevy’s 2024 Silverado HD.

Although there have been a few teasers in the build-up to today’s premiere, Ford has been awfully quiet about the new Super Duty. One of the clips shared on social media did show a side logo with a red “6.7L” next to “Power Stroke” lettering, thus revealing diesel power is here to stay. As a side note, Chevy updated the 6.6-liter Duramax and it now makes 470 hp (346 kW) and a colossal 975 lb-ft (1,322 Nm) of torque.

On the gasoline side, a recent report indicated the 2023 Super Duty will receive a newly developed naturally aspirated 6.8-liter V8 to replace the aging 6.2-liter V8 nicknamed “Boss.” The mid-cycle refresh is unlikely to introduce a hybrid option for the workhorse, so the big truck is believed to solider on with ICE-only powertrains.

Spy shots have revealed the Blue Oval is once again preparing an extensive array of trim levels as we’ve seen prototypes of the XL and XLT as well as the fancier King Ranch and Platinum. All are expected to share a redesigned front akin to the smaller F-150’s fascia. There should be some significant changes on the inside where sources close to Dearborn have indicated a large display, potentially measuring 12 inches on the higher-end trims.

Following today’s official debut, the revised Ford Super Duty should go on sale in early 2023. Production is expected to continue at the factories in Kentucky and Ohio.