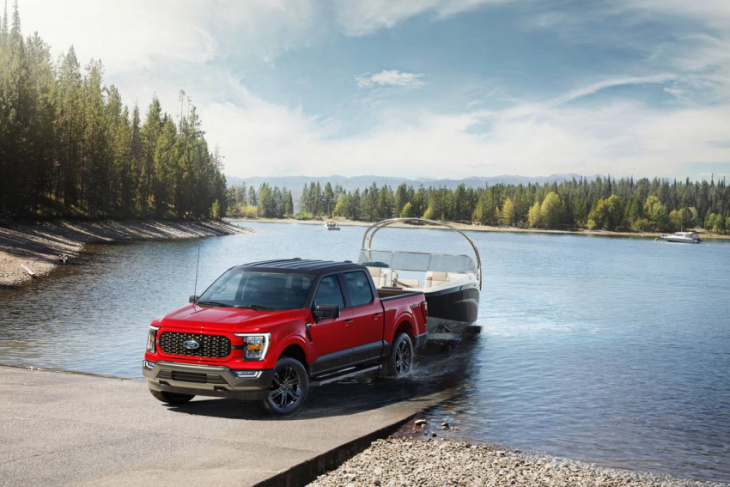 Ford is commemorating the F-150’s 75th anniversary by throwing it back to the 1970s with the new 2023 F-150 Heritage Edition. Based on the F-150 XLT SuperCrew, the Heritage Edition is an appearance package inspired by the ‘70s and ‘80s, with a more discreet take on the retro F-150s’ two-tone exterior paint.

While the Heritage Edition also gets a few unique interior appointments, most features carry over from the regular XLT. The new anniversary edition will join the off-road-oriented Rattler Package, which Ford announced in March.

The Heritage Edition will only be available on the F-150 XLT’s four-door SuperCrew variants, and you’ll know you spotted it by the two-tone exterior paint. The exterior takes on an A-B-A pattern that was used on earlier F-150s: Color A goes on the roof and pillars, bumpers, lower door and lower body, while color B is used for the pickup’s midsection. Five color combinations will be offered for the 2023 Heritage Edition: Race Red or Antimatter Blue with Carbonized Gray, and either Area 51, Atlas Blue or Avalanche with Agate Black.

A slate gray and black interior with unique seat-trim inserts and special embossing on the console lid sets the Heritage Edition apart from regular XLTs. To ensure drivers remember the anniversary, a “75 Years” logo appears on the upper part of the windshield, within the touchscreen animation and on the center console.

Ford says orders for the F-150 Heritage Edition will open in July and production will begin in the fall. Pricing will be announced closer to its arrival; the 2022 F-150 XLT SuperCrew currently starts at $45,910 (including a $1,795 destination fee).

What Years Is an OBS Ford F-150 Pickup Truck?

Is The Ford F-150 Lightning The King Of City Trucks?