BMW brings further refinements to its track weapon for the new year. 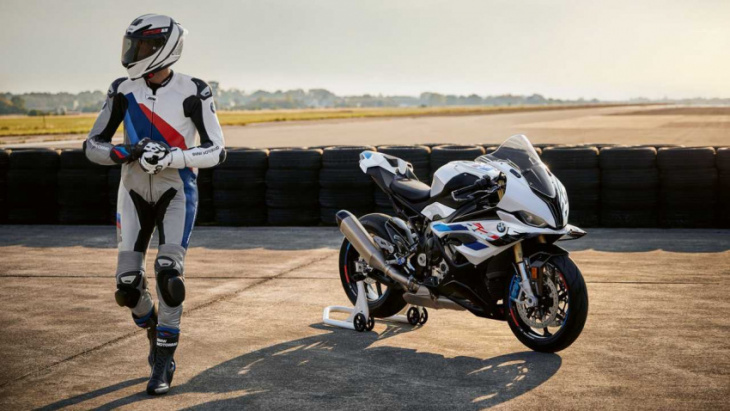 On September 29, 2022, BMW Motorrad pulled the covers off the 2023 S 1000 RR. There are quite a few changes here, mainly geared toward enhancing the riding experience, so let’s dive right in.

The first and most obvious thing to notice is those winglets up front. With BMW, form is important—but it never comes before function, and that’s certainly the case here. Depending on your speed, these winglets can create a maximum 22 pounds of downforce on the front fairing, further aiding in wheelie mitigation under acceleration. That, in turn, means the traction control doesn’t have to work as hard—and riders should be able to maintain a more consistently quick pace on track.

Speaking of BMW’s Dynamic Traction Control, it now offers a new Slide Control function that makes use of a steering angle sensor. Riders can choose between two preset drift angles in order to dial in how the bike will react when accelerating out of corners. There’s also a new Brake Slide Assist function in BMW’s ABS Pro system on this bike, as well.

For 2023, the BMW S 1000 RR gets a revised inline four-cylinder engine—and how much power it makes will vary based on geography. In the U.S., it makes a claimed 205 horsepower at 13,000 rpm, as well as maximum torque of 83 pound-feet at 11,000 rpm. As you may note, those figures remain unchanged from the previous generation’s numbers.

Other updates include chassis revisions, with more flex in BMW’s “Flex Frame” design, as well as alterations to chassis geometry. The cylinder head gets new intake port geometry, modeled on the M RR engine. While the geometry comes from the M mill, the intake ducts here are cast rather than milled. The RR also benefits from an improved airbox design, featuring variable intake funnels.

A high windshield now comes standard, as does an M lightweight battery, shorter license plate holder, and redesigned rear section for a tidy yet aggressive look. Those taking their S 1000 RR to the track will be happy to know that the rear wheel is now easier to remove than ever, thanks to a revised, lossless axle bushing mount, as well as well as chamfered brake pads and brake anchor plates.

Available colorways for the 2023 BMW S 1000 RR include: Blackstorm Metallic, Style Passion in Racing Red Non-Metallic, and Light White Non-Metallic/BMW M tricolor. Pricing and availability vary by region, but in the U.S., the starting MSRP for the 2023 S 1000 RR is $17,895. It’s expected to roll into BMW showrooms from sea to shining sea in January, 2023. If you’re interested in this bike in other regions, your best bet is to contact your local BMW dealer to ask about pricing and availability in your area.