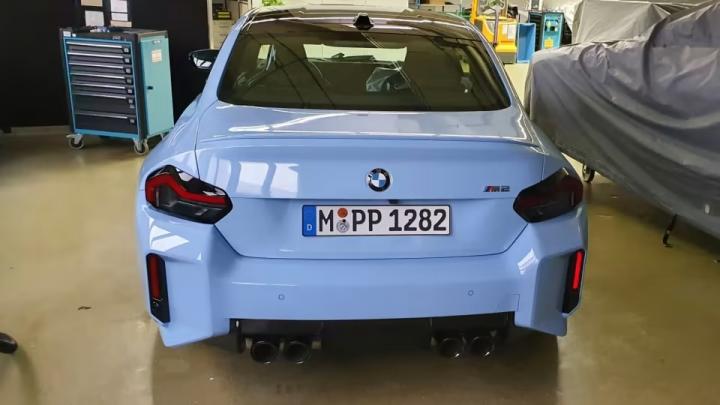 The upcoming BMW M2 will be powered by a 3.0-litre twin-turbocharged inline 6-cylinder unit producing 453 BHP.

BMW is scheduled to unveil its all-new M2 sometime next month. However, images of the upcoming 2023 BMW M2 have leaked online, ahead of the official unveiling. The images reveal all the design & styling details of the new sports car.

As seen from the leaked images, the new BMW M2 will feature a rectangular kidney grille at the front with horizontal slats. The front bumper is also new, with a large rectangular air dam at the centre and additional air vents on either side. The new M2 also features small LED headlamps at the front and similarly designed LED tail lights at the rear. The rear bumper gets vertical reflectors on either side, flanking a diffuser and quad exhaust tips. The upcoming M2 can be seen riding on 19-inch alloys with M-specific brake calipers and performance brake discs at either end. The car is finished in its flagship paint scheme – M Zandvoort Blue.

Inside, the 2023 BMW M2 will get M Carbon bucket seats, a dual-screen dashboard, one being the digital instrument cluster and the other being the infotainment unit with BMW’s latest ‘iDrive 8’ software. The car will also come packed with tech and plenty of other features.

Reports suggest that the upcoming BMW M2 will be powered by a 3.0-litre twin-turbocharged inline 6-cylinder unit producing 453 BHP. It will come paired with either a 6-speed manual or 8-speed automatic transmission.