Peugeot had set the pace in the Hypercar class on Thursday with its pair of 9X8 LMH cars, but Toyota finished well clear of its French rival in the last on-track session prior to qualifying, locking out the top two spots on the timesheets.

Mike Conway completed a qualifying simulation at the beginning of the 60-minute session that yielded a best time of 1m48.384s, which was a full 1.3s quicker than what Peugeot’s Paul di Resta had managed in much cooler conditions in FP2.

It put the #7 Toyota GR010 HYBRID 0.364s ahead of the sister #8 entry driven by Brendon Hartley, with no other car breaking the 1m49s barrier during the session.

Peugeot ended up more than a second off the pace in FP3, with Gustavo Menezes leading the way in the best of the two 9X8s ahead of team-mate di Resta.

Ex-Formula 1 driver di Resta propelled the #93 Peugeot to fourth late in the session, leaving the sole Alpine A480-Gibson last in the five-car field.

However, Alpine did not focus on one-lap pace in practice, with the car’s best time set by Mathieu Vaxiviere six tenths slower than what the Frenchman had managed in second practice on Thursday evening.

The LMP2 honours went to WRT thanks to a 1m51.792s effort from Robin Frijns in the #31 ORECA, with United Autosports ending up just 0.018s adrift in second courtesy of Filipe Albuquerque.

AF Corse’s Pro/Am entry ended up third and another 0.038s adrift with Alessio Rovera at the wheel of the squad’s sole ORECA, while the championship-leading Jota machine ended up fourth in the hands of Will Stevens. 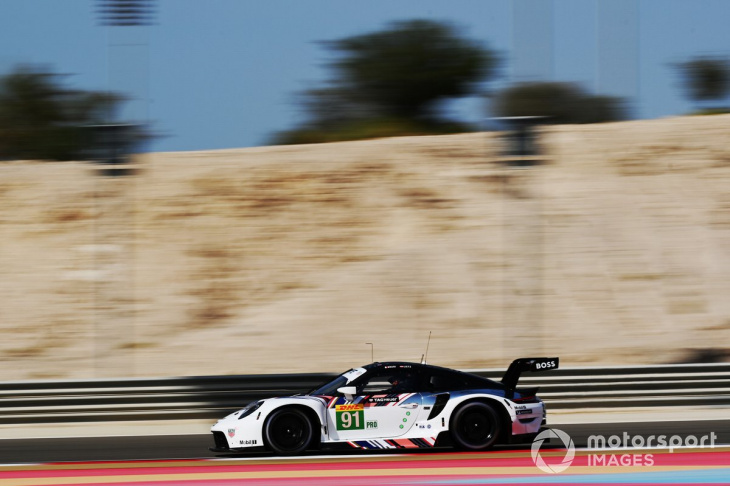 Porsche completed a clean sweep of practice in the GTE Pro class, although on this occasion it was the #91 911 RSR-19 that led the way thanks to a time of 1m57.089s set by Gianmaria Bruni.

Alessandro Pier Guidi finished 0.229s behind in the best of the two Ferrari 488 GTEs, ahead of the sister car driven by Antonio Fuoco.

Pier Guidi’s team-mate James Calado suffered a left-rear puncture in the final 15 minutes of practice after he was involved in a slow-speed collision with a GTE Am Porsche while trying to navigate his way through traffic.

The championship-contending #92 Porsche was more than two seconds off the pace in fourth with Kevin Estre driving solo in the session, while Corvette again ended up last with Tommy Milner at the wheel of its C8.R.

Nicolas Leutwiler put the Project 1 Porsche on top in GTE Am ahead of the #54 AF Corse Ferrari of Francesco Castellacci, while Christian Reid finished third in the best of the two Dempsey Proton 911s.

Peugeot dethrones Volkswagen for the first time in 14 years.

German sportscar manufacturer Porsche recently revealed the 911 Dakar. However, Porsche really wanted to use the Safari name for the raised off-road special 911 but that move was blocked. The one blocking Porsche from using the Safari name was Tata Motors, which has been selling the Safari SUV for quite ...


View more: Tata Blocked Porsche From Using The Safari Name - Here's Why We Got The 911 Dakar