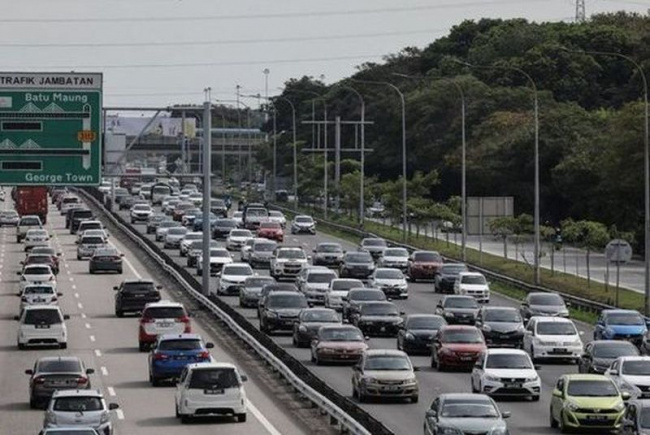 KUALA LUMPUR: Heavy traffic is expected on several highways as many return home after the Chinese New Year celebrations.

“As of noon, traffic on the North-South Expressway reached 1.18 million vehicles followed by 115,158 vehicles on LPT1 and 160,000 along Kuala Lumpur-Karak,” he said in a statement.

Several highways and routes are expected to be congested from this afternoon until late night, he said.

The locations are the main routes to Kuala Lumpur such as Gombak and Sungai Besi toll plazas as well as the Karak-Bentong Expressway (from Bentong toll plaza towards Kuala Lumpur).

Other areas involved are Slim River and the Changkat Jering -Ipoh routes along the NSE and at Elite Expressway (Shah Alam-Sepang-Nilai).

“We advise road users to drive carefully as it is the rainy season and the roads are slippery.

“Follow traffic regulations and don’t switch on the hazard lights if it is raining heavily.

“Don’t use the emergency lane as it will hamper the work of rescue operators,” Comm Mat Kasim said.

He also reminded the public to store highway hotline numbers of the police as a preparation in case there is an emergency.

“Drive responsibly and always be patient and tolerant with other road users” he added.

Touch ‘n Go unveils Visa card tied to ewallet, but it can’t be used to pay for tolls

Stuck with loan and fines – but no car

Speed limit on federal and state roads reduced for CNY

New suppliers race to plug in to electric car market

Fry with the IPG5 inverter. — Reuters WOKING (Britain): The global auto industry has committed US$1.2 trillion (RM5.2tril) to developing electric vehicles (EVs), providing a golden opportunity for new suppliers to grab contracts providing everything from battery packs to motors and inverters. Startups specialising in batteries and coatings to ...

PARIS: Electric car batteries could be used to boost power storage in the future, injecting electricity into the grid during times of scarcity or storing electricity during periods of excess, says a new study. Renewable energy is essential for the Paris Agreement goal of limiting global warming to well ...

LONDON: The writing was on the wall when Britain finalised its break from the European Union: The UK sorely lacked the battery manufacturing capability that would be absolutely critical to the auto industry’s future, leaving the country’s already declining car sector in a make-or-break bind. The failure of Britishvolt ...

Sunak appears to not be wearing his seat belt, in an unknown location in England, Britain in this screen grab taken from a social media video on Jan 19. — Rishi Sunak via Instagram/via Reuters LONDON: UK police have issued Prime Minister Rishi Sunak with a fine after he ...

PETALING JAYA: With two million vehicles expected to be on the North-South Expressway (NSE) during the Chinese New Year exodus, the police have deployed their aerial drones to monitor known dangerous spots. “Throughout the duration of Ops Selamat 19, the Air Operation (PGU) Drone Unit has been mobilised together ...

JOHOR BARU: A task force has been set up by the government to deal with issues that have been highlighted by the public on the Touch ‘n Go system. Domestic Trade and Cost of Living Minister Datuk Seri Salahuddin Ayub said that he has received a lot of feedback ...

2,000 JPJ officers to be deployed at accident hotspots

KUALA LUMPUR: Some 2,000 Road Transport Department (JPJ) officers will be deployed at accident hotspots and other areas during the Chinese New Year period.JPJ deputy director-general (Planning/Operations) Aedy Fadly Ramli said the officers would conduct focused patrols. “At the same time, some of our officers will go undercover to ...


View more: 2,000 JPJ officers to be deployed at accident hotspots

Proton Wira is ‘most stolen vehicle’

No to renting out private cars

The most important new cars debuting in 2023

What kind of data might a battery passport hold for the electric vehicles of the future?

BlackPink M'sian concert tour tickets up for grabs at Petron

How an increase in self-driving cars could harm the environment

Frustration of losing your car and perils of getting it back

Risky trip to Thailand to get back cars

Touch 'n Go given a week to come up with plan to address service issues, says Salahuddin

Need to power up EV adoption

Malaysia Autoshow returns from May 4-7

Tenaga Nasional to gain from EV ecosystem in the long term

Which automakers released the safest cars in 2022?

Heated seat belts are good for an EV

Got a call offering to upgrade your Touch ‘n Go card? It’s a scam, company says

Got game? Automakers show off in-car entertainment options at CES 2023

Water bottle trick: Are thieves about to steal your car? Probably not