Two Classic Barn Find Porsches Are Pulled Out Of Hiding 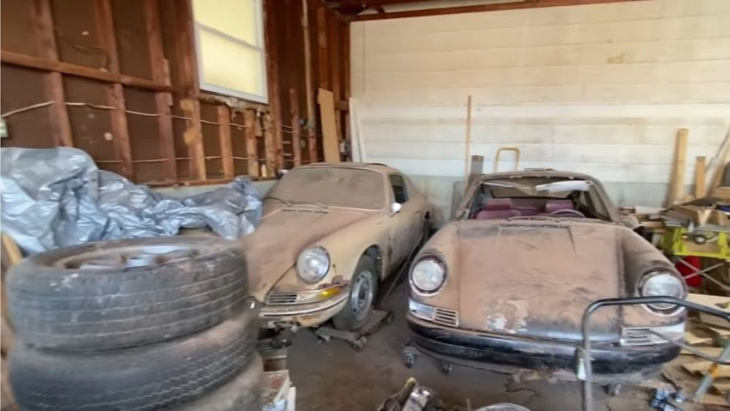 Dennis Collins has been hunting down cool cars to buy for over three decades, and in the video below you’ll see he scores big in St. Louis. People go wild over 1960s Porsches, which is why when Collins got a lead on two barn-find condition cars, he got in touch with the owner. It was a two-year negotiation process to finally get the deal he wanted, showing that if you want to hunt down old cars in your area, you definitely need to be patient.

The first car Collins examines turns out to be a 1966 Porsche 912. He was hoping it was a ’65 since that was the first production year, but it’s still a good find. The interior has the three gauges still in the dash, although the steering wheel is MIA and the dash topper is shredded along with the seats. Oh, and the floor pan is completely missing on the driver’s side, so the car is obviously going to require some serious work.

Even more amazing, the Porsche 912 hadn’t been registered since 1976. Collins theorizes it was stashed away because of corrosion problems, and that giant hole definitely backs up that idea.

Also impressive in its own way is the 1969 Porsche 912 LWB. While the exterior is rough like on the other 912, the red interior actually doesn’t look too bad. With a good cleaning and refreshing, the upholstery will probably look excellent. Plus, there are five gauges in the dash, showing this car was nicely optioned.

Some people have discounted or even completely ignored the Porsche 912s for decades, but more recently that’s been changing. Back in the 1960s the 912 was actually far more popular, selling about twice as many as the Porsche 911. Of course, scarcity is a factor when it comes to collectability and value, which is partly why 911s from the 60s go for so much more. Still, these are good finds considering 1960s Porsches of any model are becoming more difficult to come across.

Part of the deal is a whole stack of parts, which includes a 911 engine, two 912 engines, and some wheels. All in all it’s a good haul for anyone willing to put a lot of work into the stash.