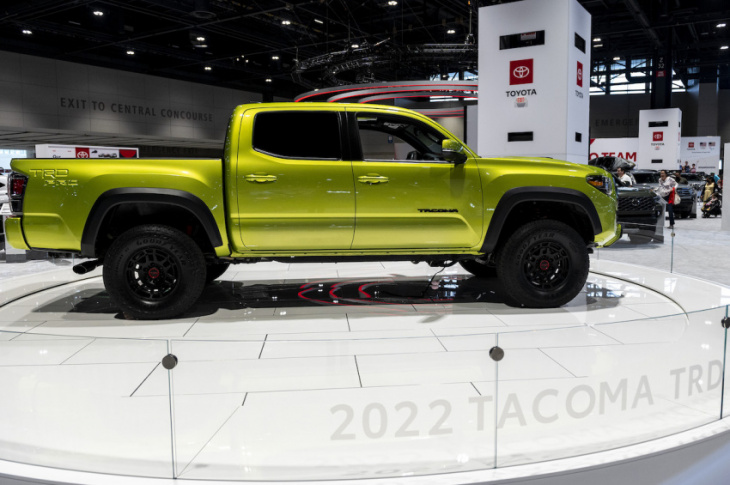 Critics don’t always agree with buyers on whether vehicles are worth buying, but the Toyota Tacoma has many of these reviewers split. If you’re interested in getting your hands on one of these trucks, do your research first. Here, we’ll help you explore Toyota Tacoma pros and cons and see whether it’s the right pickup for you.

One of the best features of the Toyota Tacoma is that there are a plethora of trims to choose from. You can get the base SR, SR5, TRD Sport, TRD Off-Road, Limited, or the TRD Pro. Each trim model offers a variety of amenities to customize your purchase that range from the serious driver to the off-roading adventurer.

The next best advantage the Tacoma has is its reliability. First, it’s a Toyota, so it comes with the brand’s well-known reputation for being durable. The Tacoma truck on its own has had some good years for its owners. A few models had issues, but overall, it’s been a good run.

Its truck bed is impressive and made of composite material, which eliminates the need for a liner, according to Edmund’s. No more worries about getting corrosion in the floor of the bed like other pickups. The last advantage iSeeCars notes is its retained value due to the brand’s known reliability.

One crucial disadvantage is a known transmission issue the Tacoma has been plagued with. There are a few years where owners struggled with it, most notably the 2016, 2017, and 2019 models. Double check the problem was resolved before buying used.

While the towing capabilities are decent for a pickup, it does fall behind some of its rivals. The Tacoma can tow up to 6,800 lbs, but it’s not all that far off from the other trucks of its size. You will also likely be disappointed with the interior of the pickup.

Toyota hasn’t redesigned the model since 2016, and it shows. With many inexpensive plastics, a cramped rear seat area, and no cubicles for your change, phone, or other small personal items, the Tacoma is just bland, and critics are no longer recommending it. At least not until it gets a redesign.

The last drawback is the low seats and ceiling, which is surprising since the Tacoma has one of the roomiest cabins available. Seating in this Toyota model isn’t all that comfortable when it feels like you’re sitting on the floor.

Other key features of the Toyota Tacoma

One of the most impressive features you can get with the Tacoma is a manual transmission option for those who like the control you get when shifting gears. It’s only offered on some trims of the V6 models. Otherwise, you get a six-speed automatic instead.

You can also get plenty of off-roading features as well. The Tacoma offers snorkels, skid plates, and the Crawl Control, which helps the vehicle climb over rugged terrain at a lower speed than normal.

The Toyota Tacoma line of trucks continues to be some of the most inexpensive on the market and holds quite a bit of value due to the brand’s known reliability. While the upper trims will come at a high cost, the lower ones are pretty reasonable if you’re just looking for a pickup to haul your items. You get a decent amount of features with the entry-level models, especially now that it comes with Android Auto and Apple CarPlay.

Toyota’s Tacoma truck has its benefits as well as its drawbacks, but all in all, you can expect to get a well-made truck for an inexpensive price. If you’re buying used, be sure to either avoid the years with transmission problems or check to be sure the issue was addressed before buying.

Keyword: Toyota Tacoma Pros and Cons You Must Know Before Making Your Next Purchase

What Is the Future For the Toyota Tacoma?

The Honda Ridgeline Myth: Even Heavier Than the Toyota Tacoma