MERCEDES-BENZ VANS has decided to jump into bed with EV pick-up truck start-up Rivian to make electric vans for Europe and the US.

In what some commentators see as a “get out of gaol free card” for Rivian, the pair last week signed a Memorandum of Understanding (MOU) ratifying the joint venture that will see them build large, full-electric vans together at a factory in Europe.

According to a report in Automotive News Europe (ANE): “Sharing the costs of a European assembly plant with Mercedes should help the start-up, which burned through $1.2 billion in the second quarter, conserve cash and save for its second U.S. assembly plant planned for 2025.”

It will also aid diversification for Rivian from being a ‘one trick pony’ and help them fulfil a massive van purchase contract with Amazon.

Rivian is currently experiencing multiple litigations including class action securities lawsuits as well as attracting the ire of many would-be customers with vehicle ‘reservations’ for upping the price of their vehicles (gouging), unilaterally changing its line-up to more expensive trim options and dropping certain models altogether.

The company has a contract to supply 100,000 electric delivery vans to Amazon by 2030. A pilot package delivery program has started in the U.S. but Rivian is already struggling to deliver on its EV pick-up truck orders.

The MOU with Mercedes is for the JV to produce electric vans in a factory in central or eastern Europe within the next few years, Mercedes-Benz Vans said last week in a media statement.

Mercedes said the companies are planning ways to produce both of their models on a joint production line, adding it was also developing a new all-electric van architecture of its own called VAN.EA.

ANE reports the two companies will make two large vans – one based on the Mercedes VAN.EA platform and the other based on the Rivian Light Van electric platform – at the plant, whose precise location is undisclosed.

The report says it (Mercedes) will invest 400 million euros in its factory in Dusseldorf as part of the transition. The company also said it would add “an established plant” from the Mercedes production network based in central and eastern Europe as a third van production site, joining Dusseldorf and Ludwigsfelde, Germany.

Auto industry insiders are tipping the Mercedes plant in Kecskemet, Hungary, as likely to be on the shortlist for the joint venture.

ANE says the plant was opened in 2012 and currently makes entry Mercedes cars such as A-Class, B-Class and C-Class models. The manufacturer plans to reduce the production of such vehicles as part of a strategy of shifting to higher-end, higher value models.

The VAN.EA platform will be used for full-electric medium and large commercial vans, Mercedes said in their media statement. By 2025, all newly introduced Mercedes van models will be electric only.

In a move highlighting ongoing rationalisation in the van space, Mercedes already has a partnership with Renault which builds its Citan and T-Class compact vans as versions of Kangoo. These vans have a full-electric option as does Mercedes’ medium van, the Vito.

Rivian’s link with Mercedes comes at a crucial time for the company which, apart from aforementioned legal wrangles and customer dissatisfaction, has struggled to ramp up production at its Illinois factory as supply chain disruptions and rising materials prices forced it to cut staff and delay product programs.

Rivian shares have plummeted nearly 68 per cent for the year to date.

News outlet Reuters reports that, “Rivian is playing in a crowded field of start-ups trying to cash in on demand for electric commercial vans under pressure from established auto-makers who have moved quickly to counter the threat with electric vans of their own.”

These include Ford, Stellantis and Mercedes-Benz itself whose order books are full with no end in sight of supply chain difficulties. 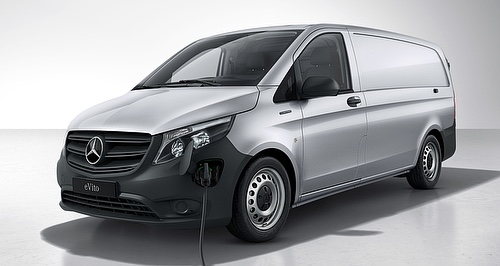 Keyword: Rivian gets a leg-up from Mercedes-Benz

Mercedes-Benz is launching sales of two of the three plug-in hybrid versions of the new GLC unveiled in June. The GLC 300 e 4MATIC and the GLC 400 e 4MATIC will be offered in Germany at prices starting from €71,471 and €74,922 respectively. When the new generation of the ...

Somehow, we missed a turn. It would seem impossible to do in the 2023 Mercedes-Benz EQS SUV 580, with its Hyperscreen and equally massive head-up display flashing navigation cues like an airport runway guy. But there we are, the road turning into gravel, the gravel to dirt, dirt to ...

The EQS SUV has a range of up to 305 miles and more comfort than its sedan variant, but it’s not all good news.

Rivian planned to begin deliveries in Canada last November, but it hasn't yet received certification from Transport Canada.

STUTTGART: Mercedes-Benz is whetting public appetite for the new EQE with a photo that offers a first look at the SUV’s interior. The SUV would be launched online on Oct 16 on the Mercedes me media platform at https://media.mercedes-benz.com/EQE-SUV and other digital channels. Mercedes-Benz said the new EQE SUV ...

Modified Yeah, we’ve had super saloons before… but what about a super-limo? Numbers without context are generally meaningless. After all, what does 615 mean by itself? Is 600 better, worse or completely unrelated? And what about 76, 12 or indeed 7.6? It’s only when you add that last piece of ...