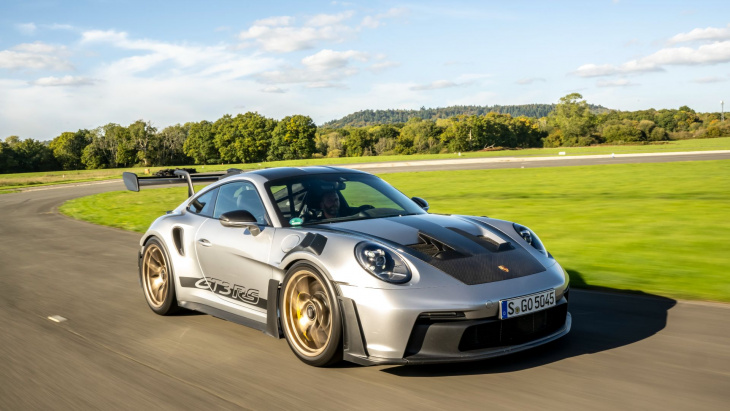 This review comes live from Dunsfold Aerodrome, better known as the Top Gear test track. And I am the star in a reasonably priced car.

Hang on… ‘star’? Granted, I’m A Celebrity won’t be calling anytime soon, but everyone deserves their 15 minutes.

And, um… ‘reasonably priced’? Well, the Porsche 911 GT3 RS costs a not-insignificant £178,500, but when you consider it could potentially beat The Stig’s lap record – embarrassing several hypercars in the process – it looks almost good value.

Can you feel the force? 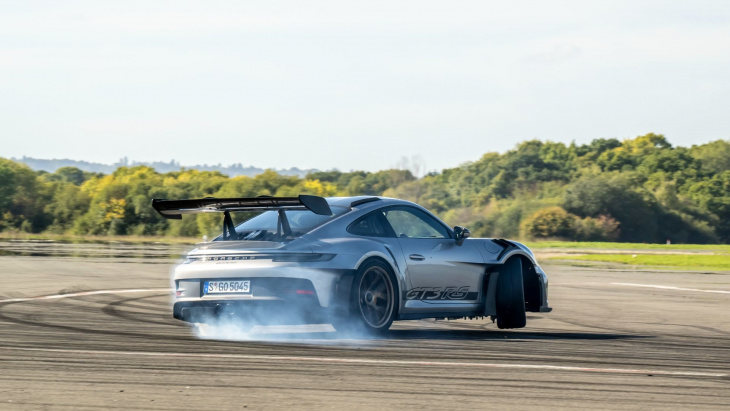 Indeed, the frenzied buzz and long waiting lists that accompany any new Rennsport model mean that, if you’re one of the chosen few allocated a GT3 RS, you could sell it for a tidy profit. But that’s quite enough cold-blooded consumer advice. Honestly, the GT3 RS is far too exciting to treat as an investment piece.

I mean, just look at it. The monstrous rear spoiler is even more extreme than that bolted to a Le Mans-spec 911 RSR, with active flaps that pop up to boost cornering grip or lie flat to reduce drag. In fact, every surface on the car’s body is peppered with aero addenda, from the cutouts behind the front wheels to the toothy rear diffuser. Its street presence is off the scale.

The result is a level of downforce seldom seen in a road-legal car. At 177mph, the RS has an additional 860kg compressing its Cup 2 tyres into the tarmac. That’s approximately the weight of a Lotus Elise, or three times more than a ‘standard’ GT3.

At the Nurburgring, it translates into a lap time of 6min 44.8sec – only six seconds slower than the Manthey-modified 911 GT2 RS that holds the production car record. 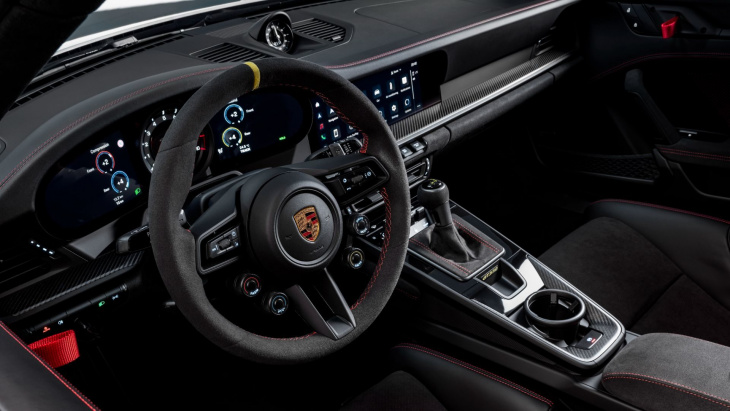 The new RS also introduces a level of configurability more akin to a racing car. Four rotary buttons on the steering wheel allow you to adjust the dampers for compression and rebound, tighten the lock rate of the limited-slip differential and control the traction and stability systems. Perfect if you’re tackling the Karussell one day and, er, Gambon the next.

Its chassis may have gone digital, but the 911’s engine remains resolutely analogue: a naturally aspirated 4.0-litre flat-six that revs to a stratospheric 9,000rpm.

Power output climbs by a modest 15hp to 525hp, although a top speed of 184mph is actually 14mph slower than the GT3 – blame the drag generated by all that aero. Reinforcing its focus on lap times, the RS only comes with the paddle-shift PDK transmission. 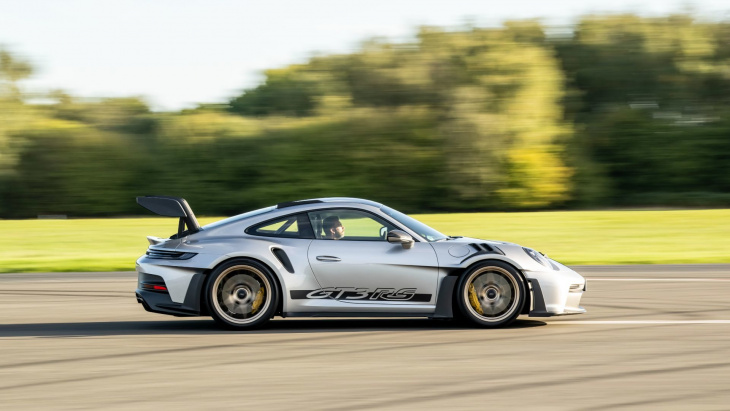 I warm up with a few laps in a 911 GT3 Touring that Porsche has helpfully brought along for comparison. The circuit seems tighter and more cambered than it looks on TV, with a hump on the exit of Hammerhead that threatens to throw the car off-balance. The Touring feels balanced, progressive and ferociously quick, but I’m itching to try its shoutier sibling. 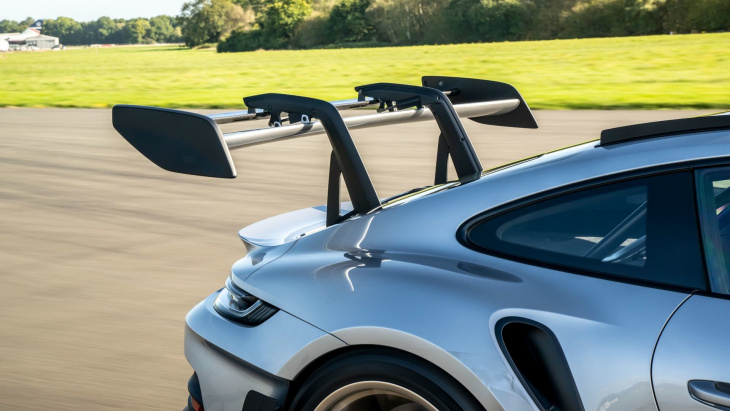 My ability might be closer to Captain Slow than The Stig, but my lap times are undoubtedly quicker. Whether all that downforce actually makes the RS more fun is debatable, but the ability to constantly tweak its set-up certainly adds an extra dimension to track driving. In my time at Dunsfold, I barely scratched the surface.

I suspect the smaller and (slightly) less aggressive Cayman GT4 RS is a more rewarding road car. But on a track, the new 911 GT3 RS reigns supreme. And on that bombshell…