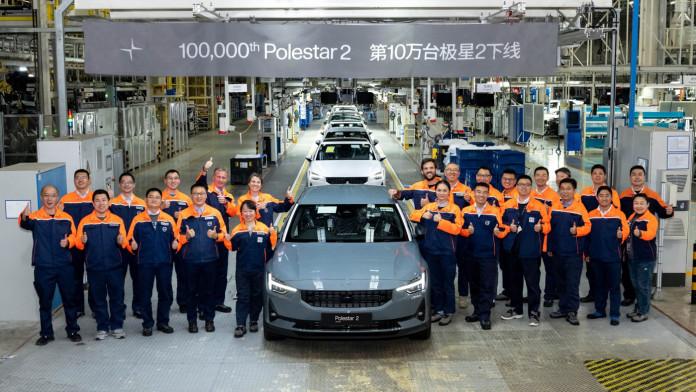 Swedish carmaker Polestar has reached a key milestone for its signature Polestar 2 model, with 100,000 units manufactured some two and a half years after production started at parent company Volvo’s Taizhou factory in Luqiao, China.

The 100,000th Polestar 2 is destined for a customer in Ireland, one of the latest in Polestar’s 27 global markets. The milestone car will be adorned with special commemorative decals to celebrate the achievement.

“It’s an amazing achievement – especially given we launched the Polestar 2 during the pandemic,” said Polestar CEO, Thomas Ingenlath. “Thank you to the team and all our customers who have joined us on this exciting journey.”

Automotive News Europe reports that the Polestar 2 was the fifth best-selling mid-size premium car in Europe, ahead of the fully-electric BMW i4, and even the regular ICE-powered Audi A5. Its sales volume through the first nine months of the year also places it as the fifth best-selling premium EV this year, putting it ahead of the Mercedes-Benz EQA, and the Volvo XC40 Recharge Pure Electric.

The Polestar 2 was launched in Singapore last year, making its official debut in the ASEAN region. Two variants are now being offered in the island nation; the Standard Range Single Motor variant offers 170 kW (231 hp) and 330 Nm of torque, with a 69 kWh battery offering up to 470 km of range, while the Long Range Dual Motor variant offering 300 kW (408 hp) and 660 Nm of torque, and 487 km of range from its 78 kWh battery pack.

Polestar says that the model has been continuously updated through over-the-air (OTA) updates, which brought improvements to its real-world performance, including driving range and increased charging speed, alongside new eco climate function and battery preconditioning optimisations. The carmaker adds that even the first Polestar 2 that rolled through the factory gates have been updated to be “as cutting edge as today’s models”.

This pushes the dual-motor Polestar 2’s power output to 476 horsepower, it costs $1,195 and can be done via over-the-air update.

What does it look like? How does it drive? How spacious is it? How easy is it to use every day? How safe is it? What’s the tech like? How much does it cost to own? The Polestar 2 has that futuristic EV look, but it’s not over the ...

Despite being a European brand, Polestar doesn’t build any vehicles in Europe. That may change when the Swedish electric performance brand launches the Polestar 7 around 2027. The information was revealed by Polestar CEO Thomas Ingenlath in an interview with Automotive News (subscription required) published last week. “For us, ...


View more: Polestar not worried about Volvo rivalry or electric car promises by combustion rivals: 'We're selling everything that hits the ground'

Polestar is ending the year on a high note. It announced that the Polestar 2 earned a coveted five-star safety rating from the National Highway Traffic Safety Administration (NHTSA), a score that makes the electric sedan one of the safest new cars on American roads. NHTSA awarded the Polestar ...

The electric sedan scored a maximum of 5 stars in each of the three categories: Frontal Crash, Side Crash and Rollover.

Polestar Is Working With Allebike To Develop Its First Electric Bicycle