Olivier Jansonnie, technical director of the programme, believes that the pace in the opening stages of the eight-hour race before both cars hit problems proves the 9X8 was much more of a competitive proposition on its latest outing in the WEC.

“We were much more in the mix here in Bahrain, as we demonstrated during the early part of the race,” he said following the third race start for the car after Monza in July and Fuji in September.

“We were quite satisfied at the beginning.

“After two stints when we started having issues, so the pace doesn’t say a lot anymore.

“But the first two stints were quite good in that respect.”

The improvement for Peugeot last weekend followed a 12kg reduction in the minimum weight of the car under the Balance of Performance as well as a small power reduction for Toyota.

Jansonnie admitted that Peugeot still has work to do over long runs and double stints on the tyres.

“It is probably something we need to work on, engineering-wise,” he said.

Paul di Resta converted his front row starting position into second position at the start in the #93 Peugeot and was never more than five seconds behind race leader Sebastien Buemi’s Toyota GR010 HYBRID prior to the first round of pitstops.

He dropped to third position behind the second Toyota during the stops and was just over 20s in arrears of Buemi when the car stopped out on track with a gearshift issue shortly before the end of the second hour. 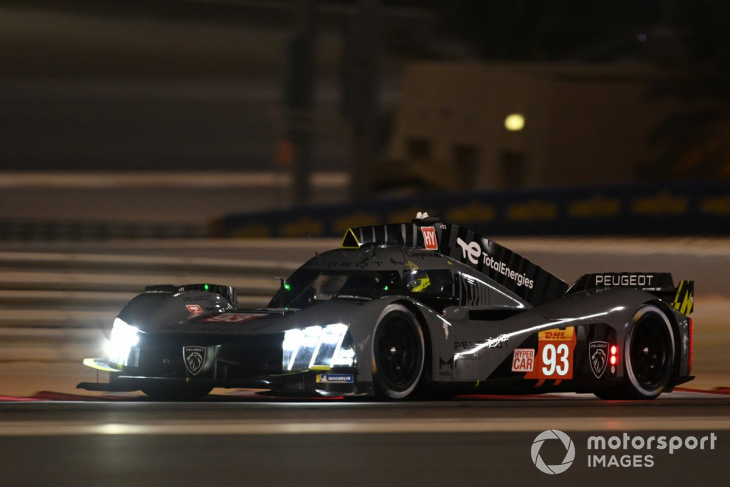 Di Resta, who shared the #93 car with Jean-Eric Vergne and Mikkel Jensen, was able to get going and after a four-minute stay in the garage Vergne returned to the track and set fastest lap of the race.

The #93 Peugeot subsequently retired in the sixth hour when the car lost fourth gear.

Jansonnie stated that he believed the two transmission problems were related but suggested that further analysis was required to be sure.

This problem encountered by the car Muller shared with Loic Duval and Gustavo Menezes was unrelated to that suffered by #93, according to Jansonnie.

The fuel pump was subsequently changed with the loss of eight minutes when Duval stopped late in the fourth hour.

The #93 Peugeot ended up finishing fourth, six laps in arrears of the winning Toyota.

Jansonnie believes that the 9X8 is still on upward trend in terms of reliability despite the problems encountered in Bahrain.

“The car is still very young and we have some new problems,” he said.

“Fuji [in September] was quite positive, this race a bit less.

“But generally I think the trend is still the same: you have some ups and downs.”

Keyword: Peugeot "in the mix" now with WEC Hypercar after Bahrain finale

Led by Governor Brian P. Kemp, Georgia lawmakers recognized January 31 as “Kia Day,” commending Kia’s vehicle manufacturing and its impact to the state since making one of the biggest single foreign investments in Georgia’s history in 2006 by establishing a state-of-the-art vehicle assembly facility in West Point


View more: Georgia lawmakers commend Kia for manufacturing and its impact to the state

The new Grove Supercars livery Grove Racing has become the latest team to reveal its first livery for the Gen3 Supercars era. The Braeside operation will once again enjoy major sponsorship from Penrite on both of its Ford Mustangs, which thus continue to sport a predominantly black livery but ...

Mercedes F1 boss Toto Wolff has been urged to support whichever of his drivers is having “more difficulties” during the 2023 season. The Silver Arrows are hoping to return to title contention this season after enduring a miserable 2022 where Mercedes’ W13 challenger started badly off the pace and ...

Just seconds separate the hybrid system engaging Cadillac’s 5.5L-V8 engine in the pit. Gif: Cadillac (Other), Steve DaSilva You’ve seen the video Cadillac Racing released weeks ago, teasing its 2023 LMDh prototype race car. Once the music fades, the soundtrack is replaced with what sounds like an amplified RC ...


View more: The New Hybrid GTP Hypercars Bump-Start Their Engines by Dumping the Clutch at Speed

A glimpse of the future. Image: Bizzarrini The world might be on fire and we might need to make dramatic changes to our lifestyles to prevent catastrophe, but that news hasn’t reached Italy yet. While the rest of the planet’s automakers reluctantly switch to electric or hybrid power, and ...


View more: Bizzarrini Is Back With a V12-Powered Hypercar Called Giotto

George Russell has made his first on-track appearance of the year at the Circuit Paul Ricard in a two-day tyre test. Russell was driving the Mercedes W13 – the 2022 F1 car – as he tested Pirelli’s new 2023 tyres ahead of the season. Lewis Hamilton will take over ...