For the first time, a manufacturer has introduced both the ICE and EV version of the same car simultaneously in India. Mercedes-Benz has brought in the all-new EQB which is an electric equivalent of the GLB in the country. Do check out the detailed first-drive review of the EQB here. Now, the GLB as the Three-Pointed naming scheme goes is positioned between the entry-level GLA and the GLC, Mercedes-Benz’s blockbuster in India. 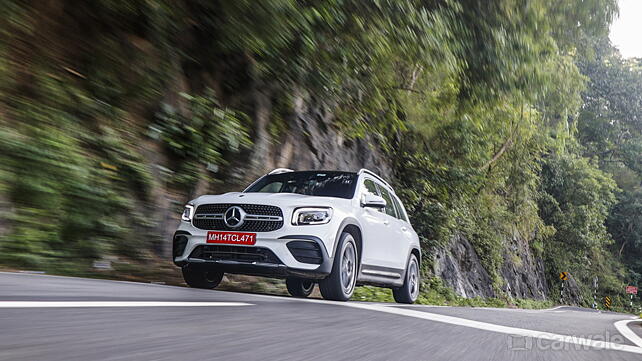 As it will bridge the gap between the two, the GLB is also expected to occupy the space that the current-gen GLC will vacant, more because the newer-generation GLC is due. But does the GLB has what it takes to fill the GLC’s shoes? Let’s find out. 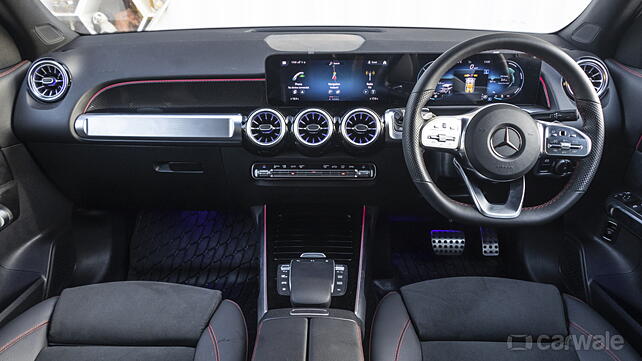 Getting inside the GLB is fairly easy as the seat height and door sill are neither very tall nor too short. Once inside, you are greeted with the familiar Mercedes cabin which has an upright massive panel with two 10.25-inch digital screens integrated with the latest MBUX system. The steering wheel design is familiar too, and has nice-looking brushed aluminium finished buttons. Speaking of the brushed aluminium, the GLB gets rugged yet premium-looking inserts on the dashboard, centre console, and door pads, all of which make the cabin feel more upmarket. 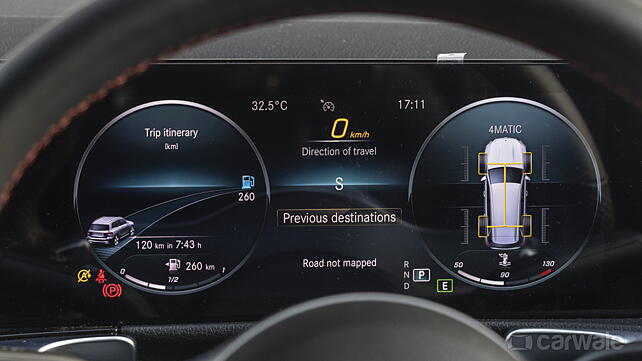 Part of the MBUX system is a touchpad that controls the screen and we liked how there’s a place to rest your palm when using this touchpad. Then, there are two cup holders and a place to keep your phone which doubles up as a wireless charger. In fact, you have more storage area under the armrest with a couple of USB-C ports, apart from the one near the centre console. As for the visibility, you don’t sit too high and the visibility around is good. However, bigger ORVMs would have helped in parking as these are a bit too small and there’s no 360-degree camera either. This being an AMG version, gets beautiful-looking upholstery with a much more expensive Alcantara-like finish in contrast red stitching. 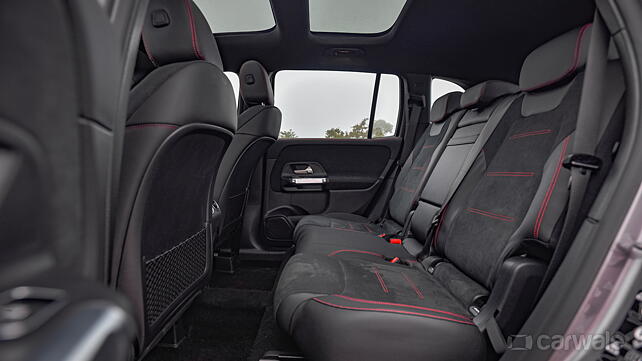 The second row is likely to be the most important place in the GLB for the chauffeured driven or those looking for family comfort. So, there’s ample leg room at the back and the flat roof with head scoops provides ample headroom. Even the seats offer good comfort with the same sportier upholstery and support. You can squeeze in three here but the middle passenger will have to manage with a protruding backrest with a hard cushion. Further, the second row can be moved back and forth and gets a 40:20:40 split as well. Then, there’s a single USB Type-C port and a recess below the rear air vents. Additionally, the sunroof adds to the overall ambience at the back.

As for the third row, Mercedes-Benz says it is suitable for kids or preteens. It’s a 5+2-seater at best because full-size adults won’t be comfortable here for longer hauls. To access the third row, the second row won’t tumble down either, so there’s a very narrow space. Once inside, the headroom is just enough for my size (I am 5’5”) with the knees propped up against the backrest of the second row. Thankfully, the quarter window at the back is large enough and the individual seats here have two cupholders in the middle, a USB Type-C port on each, and recess on either side for knick-knacks. 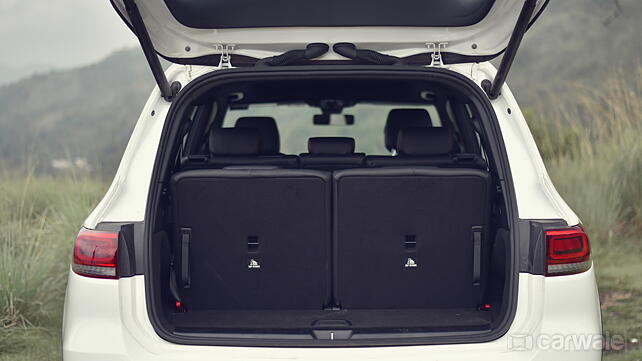 Lastly, at 130 litres, the boot space with the third row up is only good enough for a couple of soft bags or backpacks. Fold the third row and the space extends up to 500 litres. But if you want to move a house, then folding down the second row elevates it up to 1,680 litres.

In terms of the feature list, you get all the bells and whistles you’d expect from a car at this price point. Apart from the powered front seats with memory functions, you get a dual sunroof, electronic tailgate, 64-colour ambient lighting, wireless charger, two-zone climate control, and sportier seats in this AMG line. We’d have loved it if the feature list included a 360-degree camera, ventilated seats, and a fancier sound system. On the safety front, you do get seven airbags and ISOFIX in the second and third row along with active brake assist. Not to mention, the GLB has scored five stars on the NCAP test. 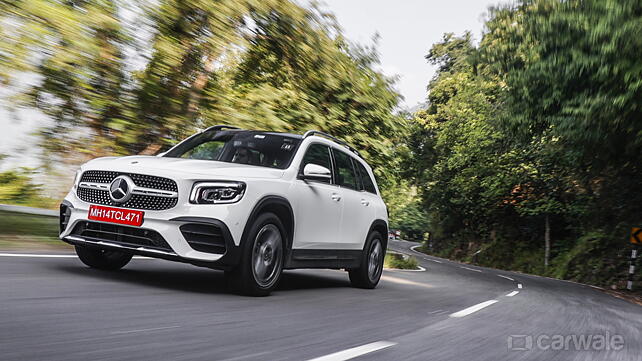 With the GLB200 you get the 1.3-litre turbo petrol from the A-Class and GLA. It puts out 161bhp and 250Nm. Meanwhile, the diesel iteration, which we are driving here, is 2.0-litre with an output of 188bhp and 400Nm. The petrol is paired to a seven-speed DCT while the diesel gets an eight-speed DCT sending the power to the front wheels except in the AMG line which has the 4Matic AWD. 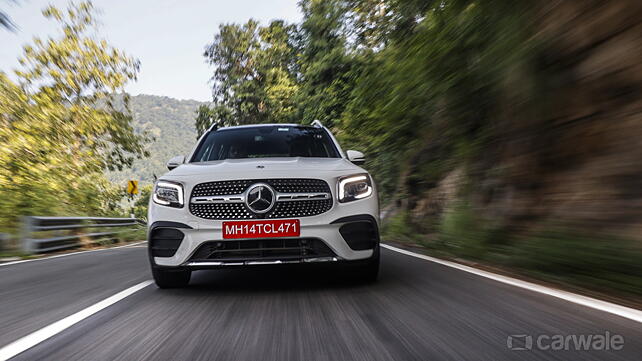 Now, whether idling or moving, this turbodiesel is slightly noisier. But it’s more heard than felt. It has good grunt lower down the rev range, and even the mid-range has good shove when there’s a need for overtakes and that too with minimal lag. Mercedes-Benz says the 0-100kmph time of the 220d is just over 7.5 seconds. Moreover, EQB includes an engine start-stop function as a fuel-saving measure. Plus, it gets the usual three modes — Eco, Comfort, and Sport, apart from Individual, which alters the throttle response and weighs up the steering. Even the exhaust note gets throatier in the Sport mode. With this 4Matic version, you also get an Off-road mode. It changes the torque that goes to the required wheel, with the top speed clocked at 110kmph, and the ABS tuned differently for off-road along with hill descent control. 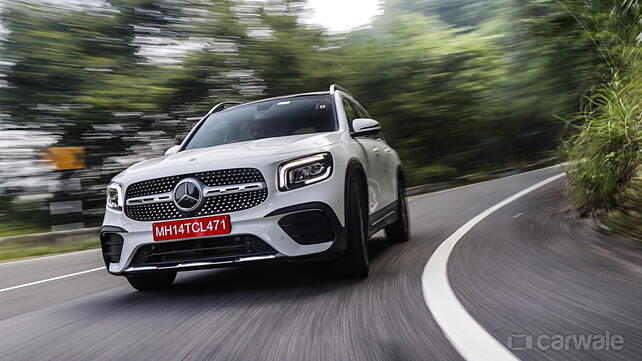 Where the petrol version gets a seven-speed DCT gearbox, here in the 220d, you get an eight-speed automatic. Unlike the newer nine-speed unit which constantly runs through the gears every time you accelerate or brake to find the right gear, this one is more familiar – more conventional. It tends to upshift around 2,000rpm and in sport mode or when accelerating hard it would easily hold the gear for longer, thus giving you the strong mid-range grunt when you want to go uphill or while overtaking on highways. 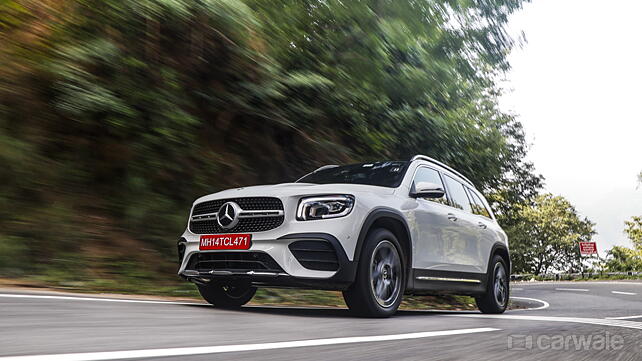 Going almost three-turn lock-to-lock, the steering isn’t very quick but it is direct. Driving on the ghat section from Kodaikanal, its direct nature combined with the grippier Pirelli tyres was too much fun. More fun than you’d expect from a three-row, family SUV. As for the ride quality, we experienced smooth surfaces on highways and some bad sections on the ghat. Although on the stiffer side, the ride wasn’t very jarring and it took in everything nicely. We wanted to try driving the GLB with seven people on board but that’s something for another day. 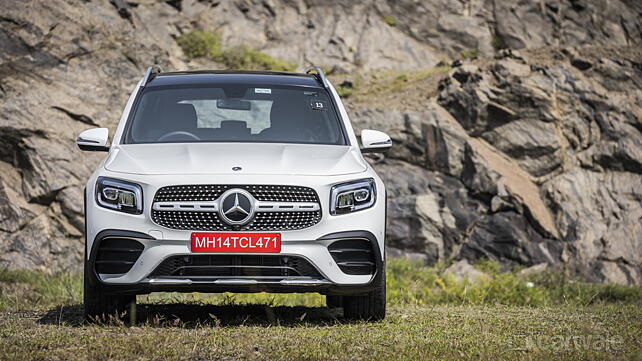 Currently, the GLB takes the CBU route. Whether Mercedes Benz will manufacture it here in the country depends on the response this three-row family crossover gets from the Indian buyers. As we know, this GLB will occupy the space that the outgoing GLC will create. With no direct alternatives that provide a three-row configuration in its space, the GLB offers a good practicality package, decent driving dynamics, loads of features and everything else the Mercedes-Benz badge comes with as default. 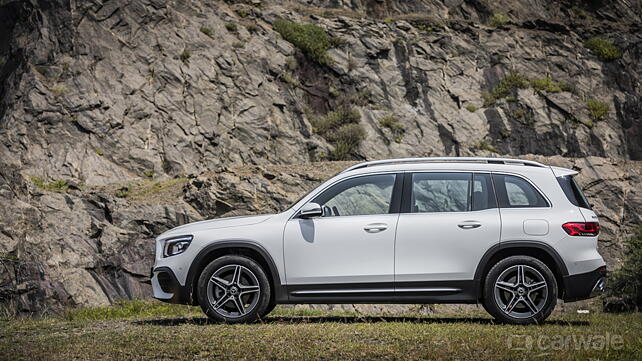 And since the new-gen GLC – which is due next year – will eventually get more expensive, the GLB has a high chance of garnering the same popularity the GLC had enjoyed in India all these years. So the buyers who found the GLC to be an enticing deal, the GLB now offers almost all of that but with the addition of a third row. 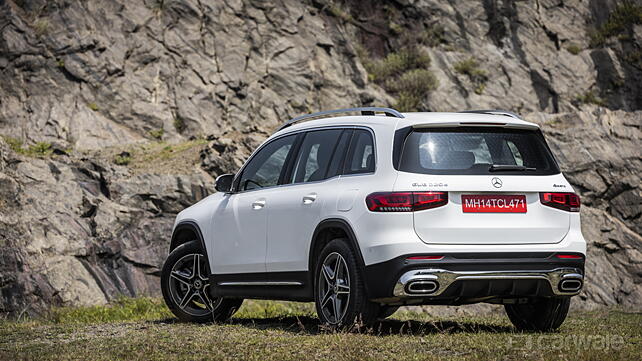