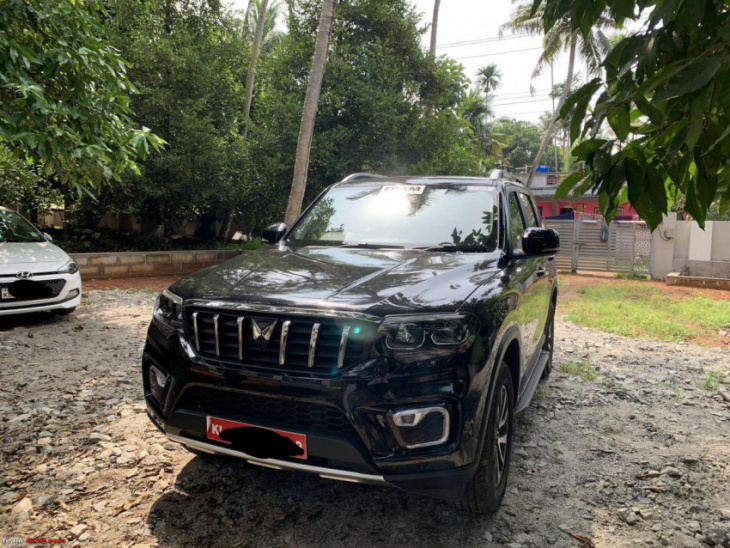 The ride quality is on the firmer side. You will feel potholes and bad roads, but you can fly over them as well as speedbreakers and the like without slowing down if you want to.

BHPian cresterk recently shared this with other enthusiasts.

The engine is very surprisingly quiet at idle, just as silent as the previous gen Benz C220d that I was driving around the past week. However, vibrations are present even at idle and once you get moving, the sound of the diesel engine creeps in even at normal rpms. It is still crazy that a Mahindra could even be compared to a mercedes though, kudos to the team who worked on this. Power is decent but the gearbox does take its own sweet time to upshift if you try to drive it hard. The accelerator is sensitive and you will be doing triple digit speeds without realising it.

The ride quality is on the firmer side. You will feel potholes and bad roads but you can fly over them as well as speedbreakers and the like without slowing down if you want to. Sit in the middle seats however and you will realise that your family will probably curse you if you do this. The middle row is definitely less comfortable over bad roads than the front.

This SUV handles very well and you can go through sharp turns and twisties without losing control or any drama. Combined with the light yet precise steering wheel, you can throw this around corners almost like a taller car. Enthusiastic drivers will definitely enjoy this. Other than the body-roll, you don’t feel like you are driving a heavy body on frame SUV at all.

Strong but very sensitive. It grabs quickly and even a small press on the pedal will slow the car down suddenly. It will definitely take some getting used to. A lady driving a scooter decided to suddenly stop in the middle of the road and do a quick right turn without indicators or even so much as a glance back, regardless of me blaring the horn so I was forced to brake hard and move to the right and then immediately swerve hard to the left. This was so violent that it triggered the emergency braking hazard light flashes for a few seconds but never did the Scorpio-N feel like it was out of my control. It went precisely where I steered even with me mashing the brakes and the aunty safely puttered away on her scooter, completely ignorant to the fact that she was almost killed and free to terrorise anyone else who has the misfortune of driving behind her on a 2 lane highway.

I didn’t check out the inbuilt apps because I will probably never use it but both the screens are pretty responsive. Not sure what chipset they have used but it is as responsive as a phone or tablet. Thankfully, it seems like the age of laggy infotainment systems are finally behind us. I do wish the center screen was a bit bigger or atleast had smaller bezels.

The instrument cluster screen is pretty crisp and quick to respond too with no lag. I mirrored the navigation into it and was surprised how well that worked. Having good looking analogue dials on both sides is a plus and the whole package looks great.

Both front and back camera resolution + framerate is absolutely horrible and reminds me of 2005 era flip phone cameras. It’s very jarring to go from the smooth and crisp animations of the center console to the horrible camera feed. Even my 7 year old hyundai i20 with an ATM screen like infotainment system had a much much better rear view camera than this, even with adaptive guidelines. Don’t cheap out on the camera hardware atleast in the L variants where you are paying a premium of 3 lakhs for this and the audio system.

The audio system is good but nothing too special despite the hype. The exact same playlist sounded much better in the Safari.

Other than the front parking sensors, I think the Z8L variant is a total waste of 3l compared to the Z8 variant. However, it is the only variant available for immediate delivery hence why I changed my booking to it.

As usual with proper 4x4s, you need to shift to neutral in order to engage the low range ratios. Switching through the terrain modes can be done on the fly but it takes some time to shift through multiple of them as the system takes a moment to engage each one before letting you shift to the next one.

Surprisingly, you can shift from RWD to 4×4 high even while moving. Just hit the 4WH button and power goes to the front wheels as well and it also acts as a center differential lock. Unlike with full time AWD cars, this is not recommended on dry tarmac and you will hear the mechanicals protesting with a groan when you take tight turns. After all, the whole point of having differentials in any car is to help it turn as each wheel needs to turn at a different speed when turning.

I could not find a button to lock the differentials on either axle manually and mahindra only mentions the differential locks in passing in the brochure. The salesman as usual, was completely clueless how it works. As far as I can tell, the rear differential gets a mechanical lock that is probably automatically engaged via the 4xplor system and the front gets the brake locking differential, also engaged by the same system when it meets some conditions. Please correct me if I’m wrong.

It is definitely a driver’s car. I loved every moment of driving it and I’m eagerly looking forward to getting mine delivered. Planning on replacing the center IRVM with an auto dimming unit and it should be perfect. Last row seats are straight up unusable but I only plan on putting my dog there on long trips so it shouldn’t be a problem. At most, I might just remove it altogether to have some extra space for luggage or a more comfortable space for the doggie.

Keyword: Mahindra Scorpio-N 4X4 AT: A Hyundai i20 owner shares his observations

Mahindra to showcase Born Electric SUVs in India on Feb 10

Chery Tiggo 8 Pro vs Haval H6 vs Mahindra XUV700: Which one has the lowest running costs?

Electric cars are increasingly finding their way into films and series. The streaming giant Netflix has announced that it will increase the presence of electric vehicles in shows and films it produces itself. The first step is a cooperation with General Motors. VW is also placing its electric cars ...


View more: Movie heroes to save both the world and the environment


View more: 3 Reasons the 2023 Hyundai Kona Is the SUV to Buy According to MotorTrend

Image: Hyundai It’s no surprise that Hyundai’s electric vehicle range has been highly sought after in Australia, with the last release in January selling in under 15 minutes.  Hyundai has also been working on its upcoming sleek sedan called the Hyundai Ioniq 6, which has now received good results in ...

How Mahindra helped solve my Alturas' tailgate issue over a call

At one point, I noticed that the boot was opening an inch and closing back. BHPian Linuskm recently shared this with other enthusiasts. I was on a long drive this last weekend and while opening the auto tailgate of my Alturas it was not opening fully I mean only ...


View more: How Mahindra helped solve my Alturas' tailgate issue over a call

Mahindra will be showcasing its range of upcoming battery electric SUVs at an event in Hyderabad on February 10. The carmaker had originally revealed the SUVs at its European advanced design centre in August last year with the February outing marking the first time the models will be showcased on ...

Checked out the Mahindra XUV 400 in person: Here's why I didn't book it

How I almost bought a Thar, but ended up with the XUV700 instead