Johnny Lewis: The Man For The Job 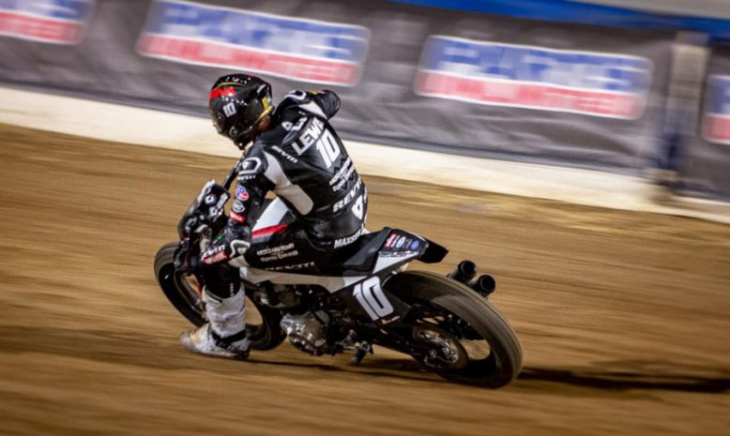 After the Progressive American Flat Track visit to the Laconia Short Track on June 11, Johnny Lewis was nursing a knee injury from the sidelines.

Lewis has been a regular in the Mission Production Twins presented by Vance & Hines class since 2020, holding a pair of career wins. The racer came to AFT armed with a lengthy history in flat track racing and Supermoto, and Lewis has certainly proven to be a competitive force in the series.

But perhaps what the rider is most known for is what he’s accomplished off the track.

Part of his job was also to develop a Twins FT motorcycle for Royal Enfield by competing in the series on their 46-horsepower machine, the INT650.

“[The INT650] is now capable of being consistently up front, week in and week out, with motorcycles that are 90 to 100 horsepower,” Lewis said. “To be able to develop a motorcycle and represent a brand that never had a big racing heritage, and to be in the hunt each weekend with brands that center their efforts on racing is pretty rewarding.”

It didn’t take long for Lewis to find success on short tracks with the new Royal Enfield entry. During its debut season in 2020, Lewis brought the bike home for two podiums finishes and one historic victory in the Daytona finale. 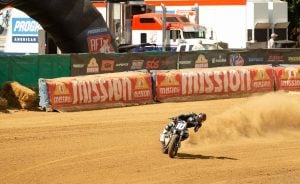 In his return to racing at the Peoria TT, Johnny Lewis managed to put the Royal Enfield Twins FT on the Production Twins podium. (Royal Enfield photo)

By the time the 2022 season rolled around, the team was confident with its performance potential on short tracks, TT and half-mile racing. The next step was to improve on the Mile.

Lewis started the season with a top-five finish and two top-10 results at the first trio of half-mile tracks on the schedule. But when the series stopped at The Red Mile, Lewis’ best result dropped to 15th.

Before he was injured at the Laconia Short Track, Lewis captured another strong fifth-place finish at the venue.

“And then we were up to third at Lima, but I came back way too early from my injury and had to pull out of the main event after I re-twisted my knee,” Lewis said. “So we missed out on two podiums in a row.”

In the meantime, Lewis stepped into the role of team manager for the Moto Anatomy X Royal Enfield crew while giving his knee injury the proper time to heal.

“It was awesome having someone else on the bike and inspiring to see the progress of the new chassis,” Lewis said.

Ironically, at the Peoria TT round of the series where Lewis made his return, he opted for the old chassis, believing it was better suited for the track. When he crossed the finish line in second place, it became obvious he was ready for a comeback.

“Everybody thought I was crazy, but I knew I personally could do it,” Lewis said. 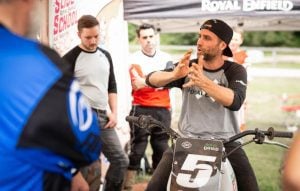 His learning process with the bike has continued to fluctuate through the season, jumping from a disappointing ninth-place finish at the Rapid City Half-Mile to a podium at the Castle Rock TT. Even as the team took on the daunting Sacramento Mile for a second time, Lewis focused on the positives.

“We were getting everything out of the motorcycle we could that day,” Lewis said.

Lewis was running third early in the Sacramento main event until his shifter broke off in fourth gear on the fifth lap. Coming out of the corner, he hit the rev limiter and was forced to manage the throttle down the straight, fading back to sixth.

“It was eventful, but the positive is that we finished our first Mile race,” Lewis said. “It would have been cool to podium on a Mile and we know that the potential is there.”

As Lewis waits for his next chance to ride the Twins FT to victory — coming Sept. 3 at the Springfield Mile — his shifts his attention to another one of his many roles off the track.

It’s been exactly two years since Lewis played a part in opening the Royal Enfield Slide School. Within 24 months, Lewis and his team have taught more than 400 people in the U.S. how to ride flat track, which is a remarkable feat in and of itself.

Lewis uses a stripped-down version of the 411cc Himalayan as a concept motorcycle to help riders understand the technique of flat track.

“Through our program, we teach the theory of flat track, when then also builds fans into riders and racers,” Lewis said. “It’s been neat to see.”

From development rider, to team manager, to flat track instructor — Lewis is the man for the job.

Keyword: Johnny Lewis: The Man For The Job