Porsche is cashing in on its illustrious rally history with the new 2023 911 Dakar. The latest 911 variant, rolled out this week, honors the German automaker’s 1984 Paris–Dakar rally victory with a modified 911 called the 953. That car later morphed into the iconic 959, which triumphed at the 1986 running.

While the 2023 911 Dakar won’t go into competition like its ancestors, it features a host of meaningful upgrades designed to help it conquer gnarly landscapes, with a 2.0-inch suspension lift, chunky Pirelli Scorpion All-Terrain Plus tires, and stainless steel skid plates. Porsche is only building 2500 examples, and with a starting price of $223,450, the go-anywhere 911 will likely be quickly snapped up by collectors, if it isn’t already sold out. Still, Porsche added it to its configurator, allowing us to enter the world of make-believe and design our dream rally 911. Here’s what our editors came up with: 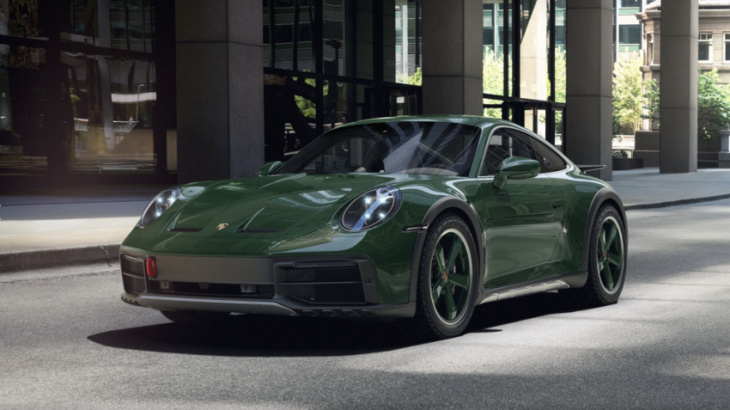 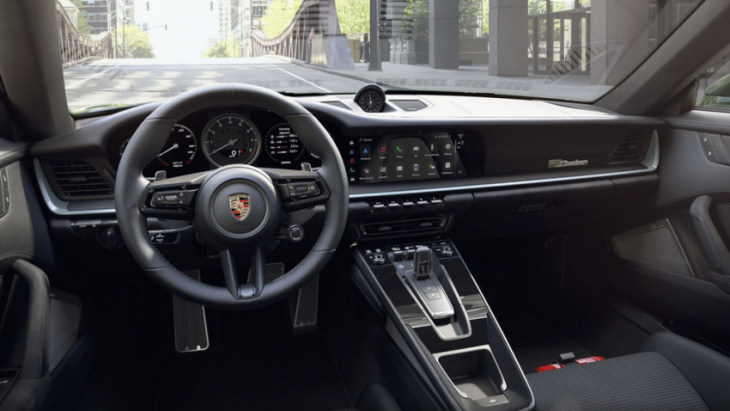 The first time I saw a safari 911, I was 15 and walking through the pit lane at Road America. I couldn’t quite wrap my head around what I was seeing. Is that Porsche lifted? Does it have extra headlights and a roof rack? I knew it was beautiful, and hoped that whoever owned it actually made use of their modifications. I kept that car in mind as I waded through Porsche’s intricate configurator for the 911 Dakar. For my paint option, I went for the $12,830 Paint to Sample British Racing Green, complete with color-matched wheels. I spent $660 to get the base of my exterior mirrors paint matched, and a further $370 for the Dakar puddle lamps, as well as $2700 to PPF the entire front end. Since I wasn’t digging the Christmas vibe the red brake calipers were giving against the green body, I paid $900 to have them painted black. I added the Surround View cameras, which should be equal parts helpful in tight parking lots as well as navigating off-road. The only options I chose for the interior were the $3980 Burmester sound system so I can blast the Proclaimers in high def, as well as a $180 fire extinguisher for safety. My additional equipment tallied up to $23,050 at the end. Considering the number and price of options available, I’m happy with that. It’s just a shame that Porsche doesn’t offer a factory-installed roof rack and rally headlamps. If only I had picked better Powerball numbers. . . —Jack Fitzgerald 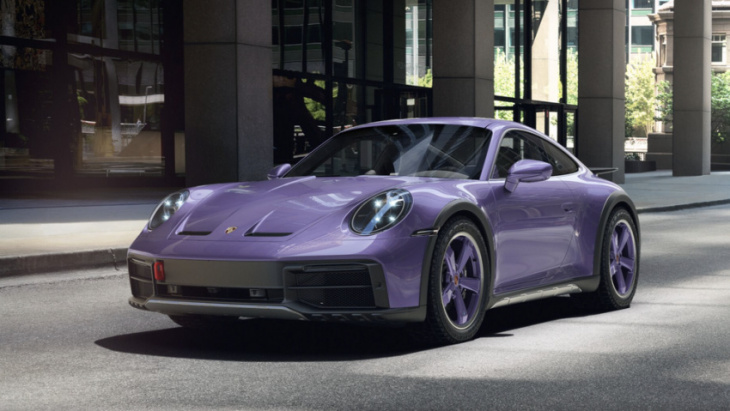 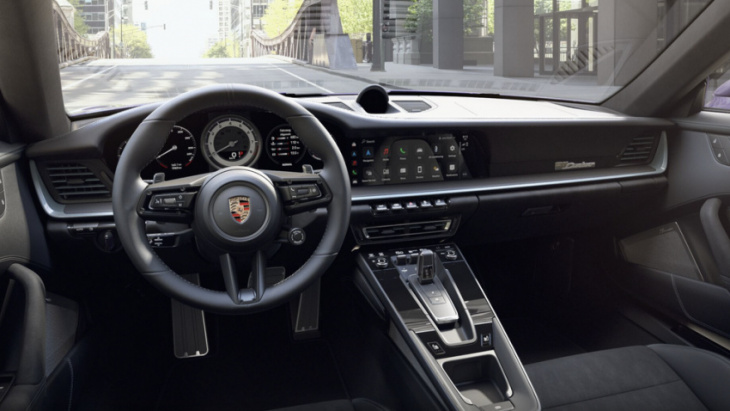 Given the 911 Dakar’s lofty starting price, I knew I had to splurge on Porsche’s Paint to Sample program, because what’s another $12,830 when you’re already spending more than 200 grand? I chose Viola Purple Metallic, along with color-matched wheels and side-view mirrors ($660). The standard red brake calipers clashed with the paint job, so I spent $900 to paint them black and an additional $430 on silver tailpipes. I wrapped the entire front end in protection film ($2700) to avoid paint chips from semi-trucks kicking up pebbles, and the $1430 Surround View camera system was a must for protecting my Dakar from unwanted scrapes. I also dropped $370 on the puddle lights and $1350 on bespoke illuminated aluminum doorsills—I made the driver’s-side sill display a 911 silhouette while the passenger’s sill says”Porsche,” with white backing light—because I love those sorts of silly gizmos.

Inside, I swapped out the bucket seats for the 18-way adjustable memory sports seats, because I value comfort and, let’s be honest, most of the car’s life will be spend tootling around the suburbs running errands. I threw in heated seats and a heated steering wheel, no-cost options, to help me survive the frigid Michigan winters. I also spent $1120 on the Porsche Design Subsecond clock, an analog piece mounted in the dashboard, since, well, it looks super cool. Then, to add some flavor to the interior I specced the tachometer in white ($420) and got the center console lid embossed with the Porsche crest ($340). I also had the air vents outfitted in silver-painted leather ($1800) along with the door panels ($1910) and the sun visors (somehow a no-cost option) so that everything I touch feels soft and supple. Since I hadn’t gone for any carbon-fiber accents on the outside, I had the interior dashboard trim replaced with matte carbon fiber ($390) and added the $3980 Burmester surround sound system. All told, $30,630 worth of options took my 911 Dakar to a grand total of $254,080—not as egregiously expensive as I expected but still is an appropriately absurd amount of money for this special 911. —Caleb Miller 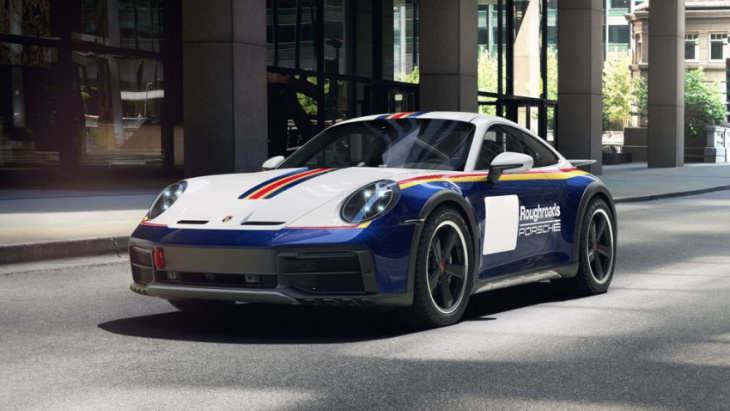 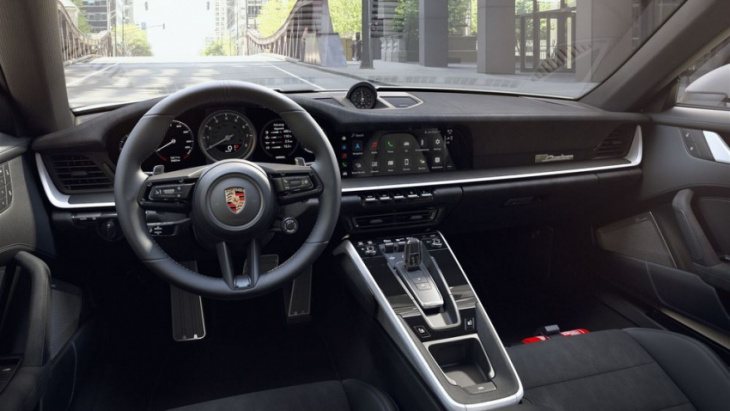 Look, getting the 911 Dakar without the Rallye Design package is like cooking a turkey without the stuffing. Skip the best part and it’s just another bird. While my colleagues’ taste in paint lands at either side of a KitchenAid mixer and McDonald’s Grimace paint palette, I’m not missing the chance at white with Gentian Blue Metallic on a 992. Porsche rewards those who pay homage to the Paris–Dakar Carrera with a Rallye Design interior stitched in Shark Blue. I’m a big fan of the center pattern on the race bucket seats, but I much prefer the comfort of the optional adjustable sports seats. I’ve left the wheels, brake calipers, and tailpipes painted black because normal use will quickly revert it to that color. For no extra cost, the interior gets heated seats and a heated GT Sport leather steering wheel. For no particular reason, I’ve added the optional fire extinguisher ($180). I’d also add the Burmester sound system ($3,980) to listen to songs such as “Nights over Egypt” by the Jones Girls and “Bidibodi Bidibu” by Bubbles from this intercontinental mashup. Equipment to be added later: a proper Rothmans vinyl over the Roughroads placeholder and a front-mounted LED light pod for the nose. Porsche’s hard-shell rooftop tent, available later this year, is a must too, but it doesn’t appear to be compatible with the roof rack. The tent will be nice to have when some Natty Light–fueled Bronco challenges me with a “That thing can’t make it through here.” If a $256,080 limited-edition 911 falls in the woods, it makes a sound. Crying surrounded by laughter, I’d imagine. —Austin Irwin