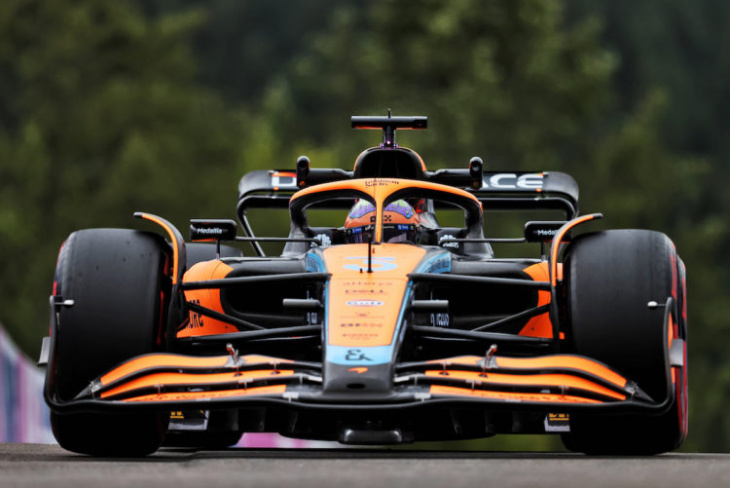 Earlier this week, McLaren confirmed that it would part ways with Ricciardo at the end of the 2022 campaign, cutting short his contract by one year.

Ricciardo has struggled for form since joining the team in 2021, however the Australian always asserted that he was committed to seeing out his deal.

His future beyond the current campaign is not yet known, but he has been linked with moves to Alpine and Haas.

Horner, who worked with Ricciardo for a number of years during his Red Bull days, is hopeful that the 33-year-old will find a seat for 2023.

Hamilton: Mercedes ‘a long way off’ after Friday running

“It’s just very sad,” he told Sky F1. “I am not close to it. I have spoken to Daniel a little bit but I don’t recognise him as the same driver as he was when he was with us.

“He’s one of the best guys out there. He’s definitely got that capability. I hope he finds a seat in F1.

“I hope he finds his mojo because if you think back to some of the races he drove for us, winning Monaco with 50% of the power [in 2018], he put in some amazing performances.

“And you have to think when he was alongside Seb, when he first came into the team, how he delivered, how close he was with Max [Verstappen] as well. Tough for him but I really hope he finds something for the future.”

Ricciardo was partnered with Verstappen for three years before he left Red Bull for Renault in 2019.

When asked if he thinks that Ricciardo could match Verstappen now that the Dutchman has more experience and success under his belt, Horner replied: “We saw how close those guys were.

“Max has evolved since Daniel left the team but Daniel, on his day, he was right there. He put in some amazing performances.

“We were sad to see him leave the team and his confidence has been zapped. We’re used to seeing him on the podium doing shoeys, messing around with that smile but we don’t see any of that anymore.

“I hope that he finds an opportunity to further his career because I think F1 is better off having him in this championship than not.”

Report – Red Bull ends pursuit to bring Herta to F1 Ferrari and Schumacher set for talks over future IndyCar stars Pato O’Ward and Alex Palou were handed a rare outing behind the wheel of a Formula 1 car earlier this week. O’Ward, who races for McLaren in the ...


View more: Everything you need to know about the McLaren GT

Alex Palou Alex Palou will stay with Chip Ganassi Racing after all, meaning Felix Rosenqvist retains his IndyCar seat at McLaren SP, both teams have confirmed. However, the former will still proceed with a Formula 1 testing programme with McLaren Racing, which seems to have been a key factor ...

Palmer: Multiple F1 teams will look to sign De Vries Has Herta earned the right to enter F1? 2021 IndyCar champion Alex Palou has tested Formula 1 machinery with McLaren on home soil for the first time this week, with Pato O’Ward also in action. The test, in McLaren’s ...

Marquez to make MotoGP return at Aragon Hamilton: Monza safety car brought back memories of Abu Dhabi The McLaren Formula 1 team has signed a new sponsor in the form of Whiskey brand Jack Daniel’s, which will become an official partner for the 2023 season. The alcohol brand, which ...

A ‘pessimistic’ Lando Norris laid out the harsh reality for McLaren ahead of Formula 1’s Italian Grand Prix, where a repeat of last season’s 1-2 result looks highly unlikely despite both cars starting on row two of the grid. Norris will start third and Daniel Ricciardo fourth at Monza, ...


View more: ‘Pessimistic’ Norris lays out how far McLaren has fallen in F1

McLaren Solus GT – Real-life hypercar based on a video game