We do not recommend using a long-delayed electric truck with bulletproof windows as a boat for any amount of time. 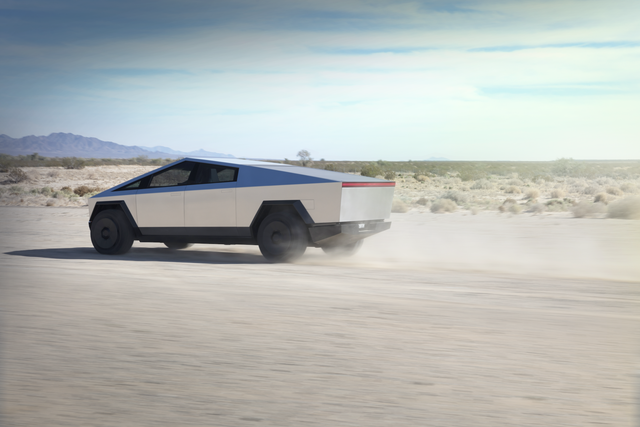 Elon Musk likes to tweet about future Tesla products and features. Sometimes, those products and features are real things that eventually make their way into the world exactly as initially described. Other times, they go onto the ever-increasing pile of things Musk has announced that have simply never happened. There is no way of knowing which way the Tesla CEO’s latest short-form feature announcement is going to end, but the idea is certainly outlandish.

Musk says the Cybertruck, still not in production despite being completely unveiled in 2019, will be “waterproof enough to serve briefly as a boat.” How briefly, you ask? Musk says the truck needs to be able to cross the channel between SpaceX’s Starbase launch facility and South Padre Island in southern Texas, a distance of about 3/10ths of a mile at its shortest point.

Cybertruck will be waterproof enough to serve briefly as a boat, so it can cross rivers, lakes & even seas that aren’t too choppy

It is important to note that Musk is not just advertising stellar river-fording capabilities, a major versatility strength of electric trucks like the Rivian R1T. Musk is suggesting that the truck is not only waterproof enough to enter and cross water under its own power but capable of “briefly” floating, long enough for the truck to actually be used as a somewhat amphibious vehicle.

While amphibious cars and trucks are inherently cool, semi-amphibious capabilities in a truck not designed solely for the purpose are a frontier no manufacturer has intentionally crossed. That becomes a concern when combined with the consequences of Tesla’s growing tradition of overstating the capabilities of its most promising and unique features. By suggesting the Cybertruck’s fording prowess has advanced to the point that it can safely float across small waterways, Musk is inviting a community of buyers already notorious for pushing the limits on technology with an alarming inability to prove that it is being used safely to take their trucks closer and closer to the limit of what constitutes “briefly” floating. Add in the truck’s apparent bulletproof glass windows and you have a new set of challenges if something does go wrong.

Tesla initially planned to begin Cybertruck deliveries in mid-2021, with RWD models starting under $40,000. As it is now 2022, the company has since moved that timeline out to mid-2o23. Those trucks may or may not be able to serve briefly as a boat.

You Can Already Buy Aftermarket Wheels For The Tesla Cybertruck

Tesla’s new Cybertruck Giga Press is on its way

Anxious Tesla Cybertruck Buyer Couldn’t Wait So Built His Own

Is this copy electric powered? When is the real Cybertruck expected now? Three years ago this month, Elon Musk debuted the crazy Tesla Cybertruck. 2020 was when it was to begin production. Then, in 2021. Now we’re hearing it will go into production next year. Maybe. And with all ...

Tesla plans to begin producing the sought-after Cybertruck in 2023, and it's already posting production positions for Giga Texas.

That's according to a crowdsourced reservation tracker not affiliated with Tesla.

While the Tesla Cybertruck may still be a year away, Tesla has posted several new jobs specific to the electric pickup.

Cybertruck. Source: Tesla With mass production of the long-awaited Cybertruck ute reported to begin by the end of 2023, Tesla has begun posting job ads seeking workers for the Giga Texas manufacturing facility. Spotted by Electrek and confirmed on Tesla’s LinkedIn and careers website, the EV maker is seeking ...

Tesla skeptics typically have several talking points. These include the argument that vehicles like the next-generation Roadster, Tesla Semi, or Cybertruck would never enter production. These arguments, or at least those for the Cybertruck, would likely become completely null and void soon. Tesla’s third-quarter update letter indicated that the ...

You can now buy aftermarket wheels for the 2023 Tesla Cybertruck


View more: You can now buy aftermarket wheels for the 2023 Tesla Cybertruck

Cybertruck 'to start mass production in 2023'

Is Tesla on track for Cybertruck mass production at end of 2023?

No, Tesla Cybertruck production is not being further delayed

Tesla Cybertruck production to begin in 2023

Tesla Cybertruck Mass Production To Start At The End Of 2023: Report

Tesla plans mass production start for Cybertruck at end of 2023

Tesla Cybertruck mass production to begin at end of 2023

Is a Tesla Cybertruck Dually Coming Next?

Tesla Cybertruck prices and specs will change, but it’ll probably be worth it

How About A Smaller Tesla Cybertruck Built On Model Y Platform?