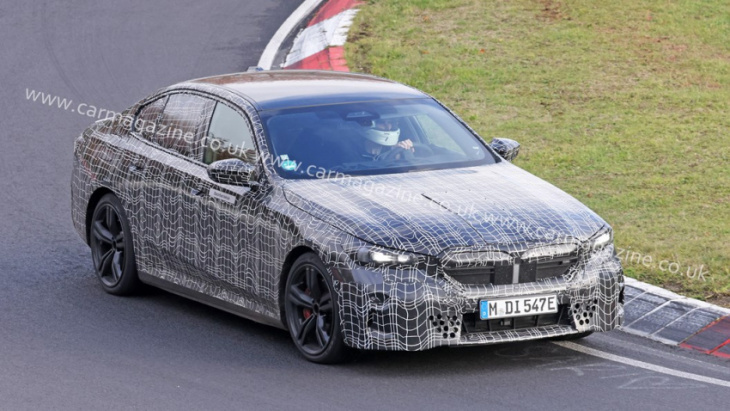 BMW is gearing up to launch its replacement for the 5 Series in 2023. The firm’s new executive saloon will be offered with a choice of plug-in hybrid and pure-electric powertrains – and, at the top of the line-up, there’ll be a 1000bhp M5-badged model designed to rival the Tesla Model S Plaid.

Spied here in one of BMW’s common-or-garden specifications, the next 5 Series will be an evolution of the outgoing model, dressed in the company’s latest design language. The biggest changes are the enlarged kidney grilles, narrower LED headlights and flush-fit door handles, all of which have been borrowed from cars like the BMW i4 saloon, i7 limo and iX SUV. 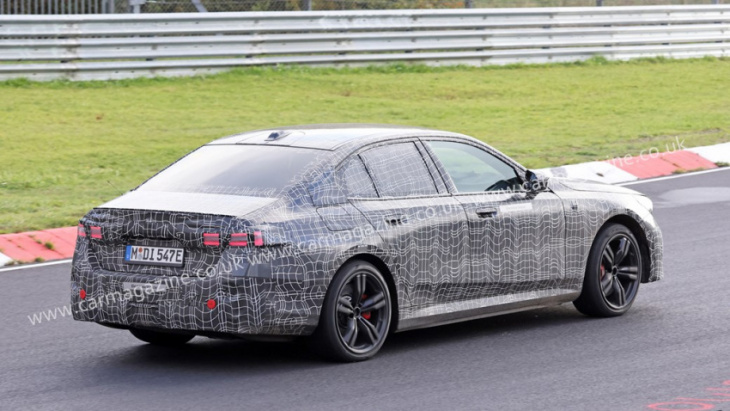 Underneath, the next 5 Series will be based on the same CLAR architecture as the i4 and i7 – and we expect it’ll inherit its battery packs, charging system and electric motors from its smaller sibling. That means there’ll be a rear-wheel drive eDrive40 variant at the entry-level with 335bhp and a four-wheel drive eDrive50 option above with 537bhp.

Both i5s will be powered by the same 80.7kWh battery pack, which should give both a maximum range of around 300 miles – even when considering the added size and weight of the new 5 Series in comparison to the i4. Charge times should be equally rapid, too. If BMW transfers the i4’s electrical system over to the i5 wholesale, the eDrive40 model will be able to add around 100 miles of range to its battery pack in just 10 minutes when connected to a 200kW charger.

Any fancy technology to speak of?

We haven’t yet had any clear spy shots of the new i5’s cabin, but we expect it’ll have a similar layout to the i4. Peering through the windows of this prototype suggests the new i5 will feature a dual-screen infotainment system with a digital gauge cluster head of the driver and a media screen in the middle of the dash. We expect the latter system will be controlled through touch commands, voice commands or BMW’s trademark iDrive control knob on the centre console. 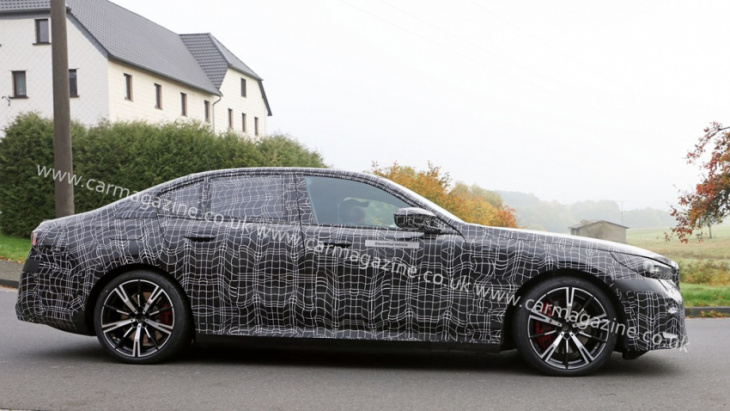 It looks like the interior will be spacious, too. The doors are wide and the driver seems to sit further towards the kerb than the old car, suggesting the next 5 Series will be slightly broader than the old car. The rear of the saloon’s roof is also slightly taller than the previous model’s, which means rear-seat passengers could get a little more headroom if the space gained isn’t being used to store batteries.

What about the electric M5? When will that arrive?

BMW is expected to launch the next-generation M5 EV in 2024 and, by the sounds of things, it’ll be a monster. It’ll feature a 135kWh battery pack and a trio of electric motors with a combined output of 1000bhp. Internal documents suggest that’ll be enough for a 0–62mph time of 2.9 seconds – and, if driven carefully, a maximum range of 435 miles.

That much power sounds excessive – but it needs to be because the next M5 will square up to a roster of extreme rivals. We’ve already mentioned the Tesla Model S Plaid (with its eye-wateringly powerful 1006bhp tri-motor powertrain), but BMW also has the likes of the Mercedes-AMG EQE, Audi e-tron GT and Porsche Taycan to contend with, all of which have more than 600bhp. 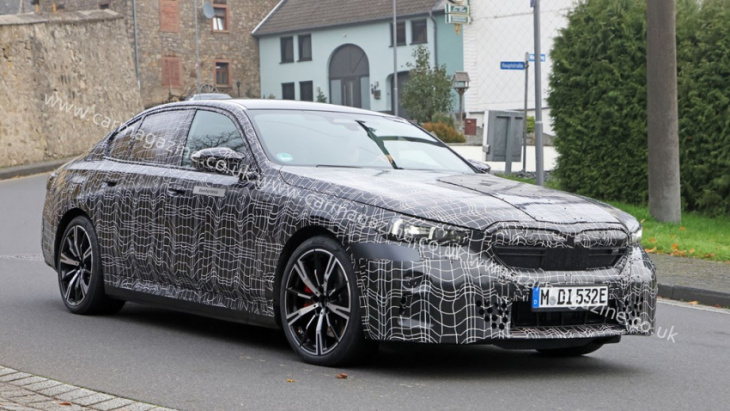 BMW was a latecomer to the electric car market. Until the iX3 was launched in 2020, the only EV the brand had on sale was the i3 – and that was more of a pilot study than a mass market offering. The i3 was built around an expensive carbon-fibre passenger cell, crammed with unusual technology like a range-extender powertrain and had styling unlike anything else from the BMW family.

Because of its quirks, the i3 appealed to a niche audience, which is all well and good for a city runabout. But the M5 and its more conventional i5 siblings will target mainstream buyers that are already very well served by a broad range of talented electric saloons. So, for its grand entrance to the electric car market, BMW needs to do something special to drag punters away from established EV brands like Tesla – and building a family saloon with more power than a Bugatti Veyron is a sure-fire way of creating a buzz. 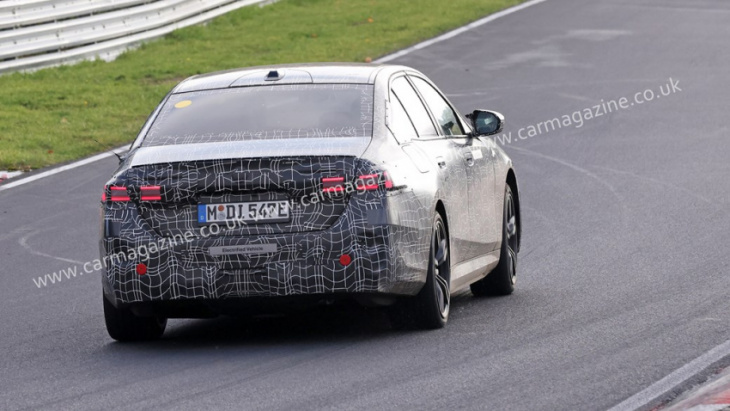 The redesign isn’t just limited to the underpinnings, as reports suggest that the car will also feature changes to its exterior, interior & powertrain performance. According to a media report, Tesla is working on a redesigned Model 3. The updated Tesla Model 3 is said to be codenamed “Highland”. ...


View more: Tesla Model 3 to be redesigned to make it cost-effective

Only 50 units to go into production 1,270kg with 560hp & 550Nm of torque Classic racing-style paintwork & interior BMW is capping off its BMW M 50th anniversary year with the launch of the new 2023 BMW 3.0 CSL. Labelled as the brand's 'most exclusive model the company ever ...