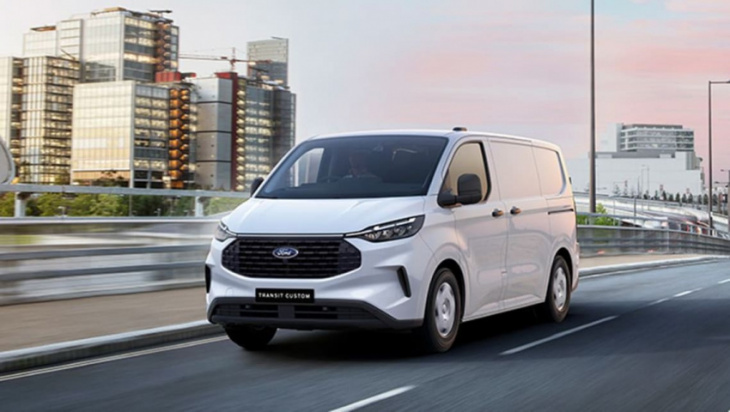 Though Ford is yet to detail exact powertrain specifications, the 2023 Transit Custom will be offered with a diesel engine.

Ten years after the debut of the current-generation Transit Custom, Ford has given its all-new replacement its first public showing.

Revealed at the IAA Transportation show in Hannover, Germany, the star of Ford’s stand was the E-Transit Custom, the halo model of the range that was revealed in full earlier this month.

However, it’s the diesel-powered variants that are the true debutantes at Hannover, with Ford also confirming the full range of body styles for the Transit Custom family along with some other morsels of information.

The second-generation Transit Custom will be available in four distinct body styles, with short and long-wheelbase standard roof offered alongside short and long-wheelbase high roof versions. The double-cab-in-van (Ford-speak for a two-row crew van) will also continue to be offered, giving operators more passenger capacity at the sacrifice of cargo volume and payload.

Local pricing and specifications are still far from being locked in, but with the first-generation Transit Custom currently only offered in the low-roof variants. It remains to be seen whether Ford Australia will bring the bigger-capacity high-roof derivative our way to do battle with other parcel-haulers like LDV’s G10 and V80.

Ford is also keeping quiet on specifics of its new van’s combustion powertrains, simply stating that it will offer “the latest generation of Ford EcoBlue diesel engines”.

The company did, however, confirm that combustion-powered Transit Customs will receive an eight-speed automatic and deliver up to 2500kg of towing capacity for the first time – that last metric also recently being achieved by the Transit Custom’s nemesis, the Renault Trafic.

For the all-electric E-Transit Custom, power will be provided by a 74kWh battery feeding a rear-mounted 160kW/415Nm electric motor, with a claimed single-charge range of 380km and a 124kW fast-charging capability to help drop turnaround time. With a compatible fast-charger, the E-Transit Custom could be charged from 15-percent to 80-percent full in 41 minutes. 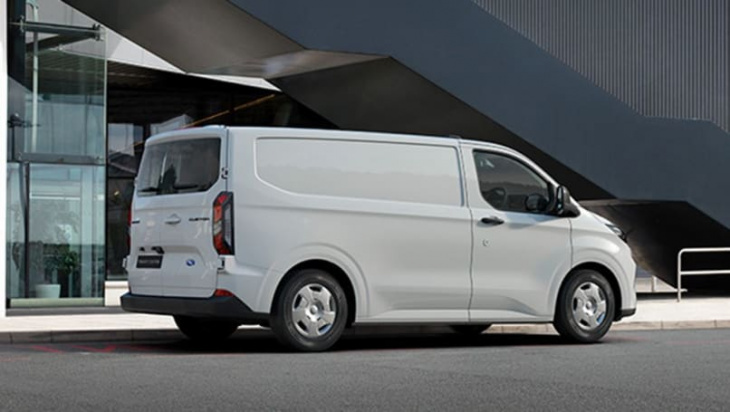 Ford is keeping quiet on specifics of its new van’s combustion powertrains.

Van operators who dread underground carparks will be delighted to know that the box-fresh platform that underpins the new Transit Custom allows it to not only have a much lower floor height, but also a roof height no taller than two metres – at least for the low roof bodystyles. Independent rear suspension will also connect the rear wheels – a noteworthy inclusion given most front-drive vans in the segment make do with a simpler beam-axle rear end.

Inside, the Transit Custom will feature a range of comfort and productivity-enhancing cabin features, including a gigantic 13.0-inch multimedia touchscreen and a Mobile Office option that incorporates a tilting steering column that gives more room for the driver to do work while parked.

More specific details are still to come, and those looking to turn over their current van in favour of this one will have a little bit of a wait ahead: the new Ford Transit Custom isn’t due to begin deliveries until late 2023 for diesel models, with the all-electric E-Transit Custom going on sale the following year.


View more: 3 Advantages the 2022 Kia Telluride Has Over the Ford Explorer

Ford Pro will equip Deutsche Post DHL Group with more than 2,000 electric delivery vans worldwide by the end of 2023. The German Group will use the new vans for last-mile logistics in various countries, including the UK. Deutsche Post DHL has received the first Ford Pro vans and ...

The test car seen in these images could be the top-spec ‘N Line’ variant. A test mule of the next-generation Hyundai Verna has been spotted once again. This time, we can clearly see the ADAS module mounted on the front bumper of the test car. The test car seen ...

Electric Hyundai has given us a first glimpse at the hot box that’ll be the Ioniq 5 N We’ve known for a while now that Hyundai is working on a hot, N-badged version of the rather brilliant Ioniq 5. In fact, it was first confirmed to us back in July ...

South Korean automaker Hyundai has teased images of its upcoming performance version of the popular and award winning  Ioniq 5 electric SUV, with a a new video presentation of what the car company calls its N series. The focus of Hyundai’s new video is on the N Brand’s four ...