The base front-wheel-drive Polestar 2 has been dropped entirely for 2024. 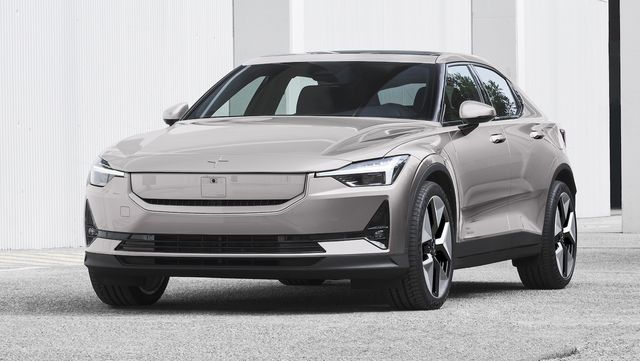 Though the Polestar 2 looks largely the same as before, the front fascia has been updated using design cues from the upcoming Polestar 3 SUV, with sharper headlights and a generally meaner-looking front end. From most other angles, you’ll be hard-pressed to tell it apart from an older model.

The biggest changes come under the skin. Both the single- and dual-motor trims get all-new electric motors, and the single-motor car now has its motor at the rear, rather than the front. It makes a total of 299 hp and 316 lb-ft of torque, 68 and 118 more than before, respectively. That means a 0-60 time of 5.9 seconds, according to Polestar. Thanks to a new 82-kWh battery pack, there’s more range too—an estimated 300 miles, the company says.

The dual-motor Polestar 2 gets a big drivetrain rearrangement as well, with the primary drive source now coming from the rear motor rather than the front. Total system output is 421 hp and 546 lb-ft of torque, enabling “vastly improved traction, greater overall efficiency and higher performance,” says the electric carmaker. The standard dual-motor Polestar 2 can clock 0-60 in a claimed 4.3 seconds.

Opt for the Performance Pack, and power jumps to 455 hp, while 0-60 time drops to just 4.5 seconds. Polestar says any eligible dual-motor cars can have the extra grunt from the Performance Pack installed over the air if it wasn’t initially purchased with the vehicle new. Whether you opt for the pack or not, the dual-motor car has a range of up to 270 miles, according to the company.

The 2024 Polestar 2 is available to purchase on the carmaker’s website right now, starting from $49,800 including destination, with first deliveries beginning later this year.