The EQS sedan has been a highly significant vehicle for Mercedes-Benz, headlining the company’s burgeoning EQ electric subbrand while pushing the limits of automotive technology, aerodynamics, and luxury. Yet as monumental as that car is, it’s still a car adrift in a sea of SUVs. Which makes the new 2023 EQS SUV an entirely unsurprising development, though one almost certain to have an even greater significance in the marketplace.

With base prices ranging from $105,450 to $127,000—the same as the low-roof EQS—the EQS SUV is a sumptuous people mover that operates in near silence. Think of it as an electric GLS-class that’s 3.2 inches shorter overall but with a 3.0-inch-longer wheelbase. The practicalities of SUV use mean that it swaps the lozenge-shaped exterior of its four-door counterpart for a more conventional, upright design that potential buyers should find comfortably familiar. That it also can swallow up to seven occupants via an optional third row of seats won’t hurt. With a drag coefficient of just 0.26, the EQS SUV is sleek for a utility vehicle, which, along with its solid black nosepiece dotted with three-pointed stars, helps it tread the line between traditional and futuristic. From certain angles, its cab-forward proportions and a roof 4.2 inches lower than a GLS’s gives this EQS the vibe of a minivan, albeit with an elegance that Benz’s old R-class never attained. 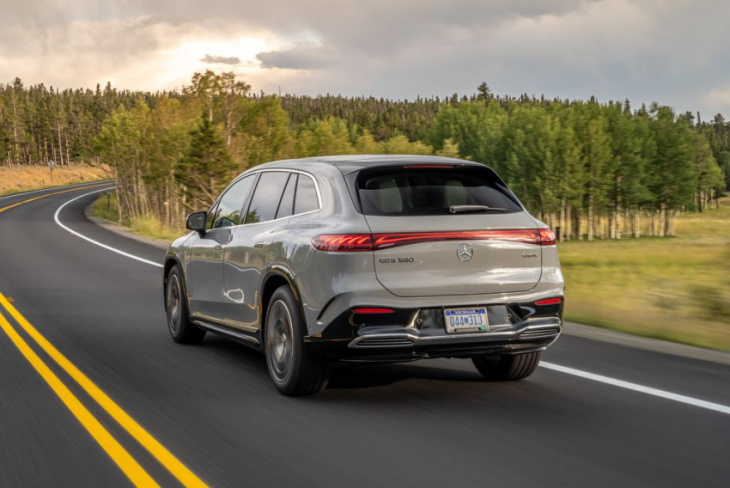 As the first SUV to be built on the company’s EVO 2 platform—a job that takes place at Mercedes’s plant in Tuscaloosa, Alabama—the EQS SUV rides on the same 126.4-inch wheelbase as the EQS four-door and shares its power units and floor-mounted battery pack, although capacity is up slightly to 108.4 kWh. The standard EQS450+ model has a single motor on its rear axle that’s good for 355 horsepower and 419 pound-feet of torque. An all-wheel-drive 450 4Matic version adds a front-axle motor that ups the combined torque figure to 590 pound-feet without changing the total pony count. Topping the lineup is the dual-motor EQS580 4Matic with its 536 horses and 633 pound-feet. Three trim levels—Premium, Exclusive, and Pinnacle—vary the degree of technology and opulence, but all feel appropriately rich inside.

As you’d expect of a larger, heavier vehicle that punches a bigger hole in the atmosphere, the SUV has a shorter estimated range than the EQS four-door: an EPA-rated 305 miles for the 450+ and 285 miles for 4Matic models, compared to 350 and 340 miles, respectively, for the EQS450 and 580 sedans. Those are still decent figures, though, and the EQS580 was one of the few EVs to beat its official estimate in our testing. Such real-world efficiency bodes well for the mechanically similar SUV, but we’ll confirm that when we get one to test. Mercedes says a 240-volt outlet will charge the SUV from 10 to 100 percent in a little over 11 hours, with 10 to 80 percent fill-ups at a DC fast-charger that can output the EQS’s 200-kW maximum taking 31 minutes. 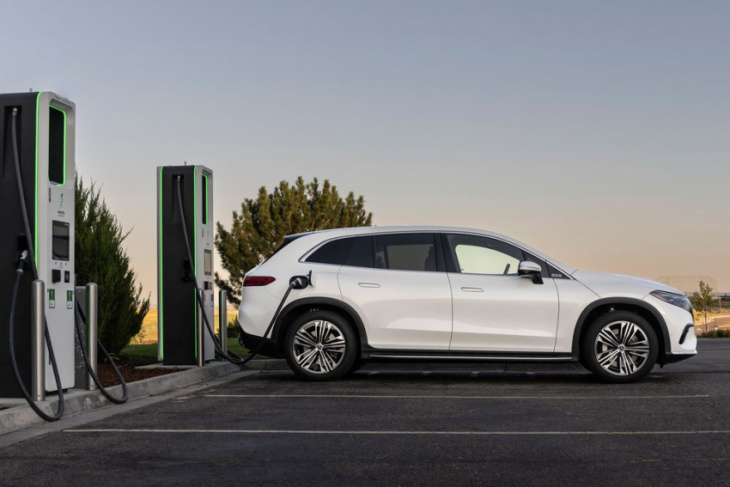 Our drive around Denver, Colorado, included both 450+ and 580 4Matic models, the latter being our favorite thanks to its ability to crush its occupants back in their seats in Sport mode (there also are Eco, Comfort, Individual, and Off-Road settings). We expect a 60-mph time of 4.2 seconds, which backs up the 580’s impression of fleetness; the 450 4Matic should be more like 5.5 seconds to 60 mph and the standard 450+ 6.2 seconds. That’s not to say the lesser 4Matic version feels lethargic when merging onto the highway, but its muted thrust simply doesn’t hit as hard, and it tapers off as speeds rise. A more powerful AMG version is not currently planned, but Mercedes says a glitzier Maybach model is in the works.

This cushy family transport is at its best when calmly cruising, its standard air springs and adaptive dampers helping it glide down the road with a soothing sense of isolation from the outside world. Its cabin is pleasantly quiet below triple-digit speeds, and its structure felt impressively solid, even when teetering on two wheels on an alpine off-road course (Off-Road mode helps here by raising the air springs about an inch to provide 8.7 inches of ground clearance). Yet whether arcing through curvy mountain passes or navigating tight trails that it likely will never see in the real world, the EQS SUV’s handling ability is bolstered by standard rear-axle steering that can pivot the rear wheels up to 10 degrees, making it feel incredibly agile for its size. Wheel sizes range from 20 to 21 inches. Gentle body lean around corners is ever present, yet feedback from the numb, artificial-feeling steering is not. 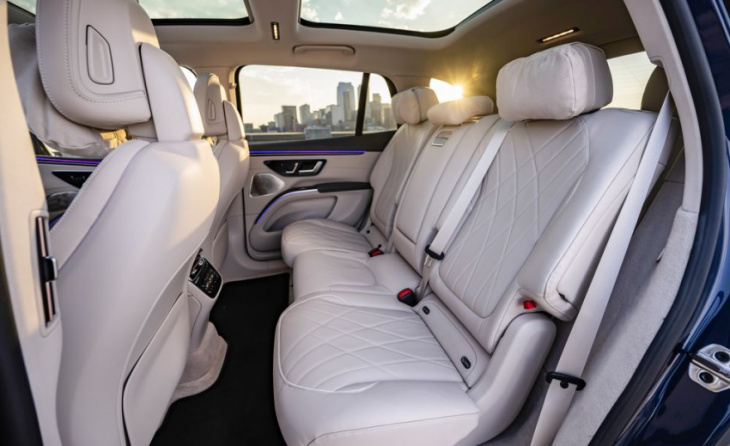 Like other EQ models, the EQS SUV features several sound profiles that play through speakers inside and outside of the vehicle, with their alternating whooshes and whirs varying from mildly entertaining to annoying. All can be turned off. Sadly, there’s no off switch for the electronic brake pedal that the EQS shares with other electric Mercedes models; it feels soft and mushy in most situations yet will firm up and depress on its own under strong regenerative braking. Mercedes says this is an efficiency-minded feature that also helps to prime the brakes for sudden stops. But we found its inconsistent action less than ideal for driver confidence, particularly when the automatic regen mode otherwise works well. We often settled for a moderate level of regen (selected via the steering-wheel paddles) for greater consistency.

There’s plenty of better-executed technology on display inside the GLS SUV, including a slew of active-safety features. Benz’s pillar-to-pillar Hyperscreen infotainment system, which encompasses three displays under a single pane of glass and even allows front-seat passengers to watch videos and play games, is standard on the top EQS580 model (lesser trims initially will only be available with a 12.3-inch digital instrument cluster and a 12.8-inch touchscreen). Though the big screen’s updated driver-configurable homepage and massive map display with augmented reality navigation are helpful when searching for charging stations in unfamiliar areas, the learning curve for the MBUX operating system is steep and the readout’s positioning across the SUV’s high cowl makes for a lot of distracting pixels. Combined with an almost complete reliance on fussy touch-sensitive controls, including on the steering wheel, interacting with the EQS SUV requires practice—and patience. 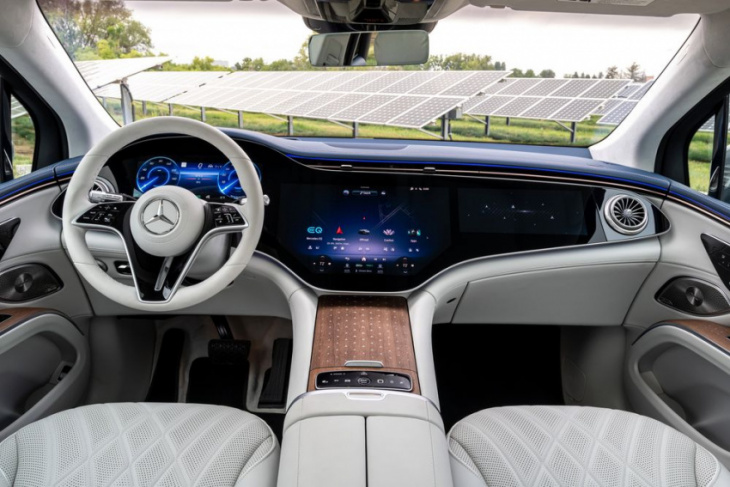 Move rearward and the interior’s poshness extends to the standard power-folding 40/20/40-split second-row seat, which offers five inches of fore/aft travel and generous recline adjustments, though heating elements and rear-seat entertainment are optional (individual captain’s chairs are not offered). Comfort levels are high, adjustable ambient lighting abounds, and the materials and finishes are lovely. Unlike in the EQS four-door, headroom was a nonissue for this five-foot-11 author, and there was enough room to cross our legs with the middle row pushed all the way back.

Tap a button on the second-row seatback and it folds and slides forward for access to the optional third row of seats. Anyone beyond their teen years may want to limber up before climbing back there, but once situated they’ll find additional USB outlets, optional butt heaters and climate controls, plus enough space beneath the middle row for their loafers. Legroom varies from decent to crushed knees, depending on how considerate second-row occupants are with their seat adjustments. However, limited headroom from the sloping roofline means taller riders will only be content on short hauls. Cargo space behind the third row is a modest seven cubic feet, but depending on the seating configuration, there’s up to 23 cubes available behind the middle row and up to 74 cubic feet with all the rear seats stowed. 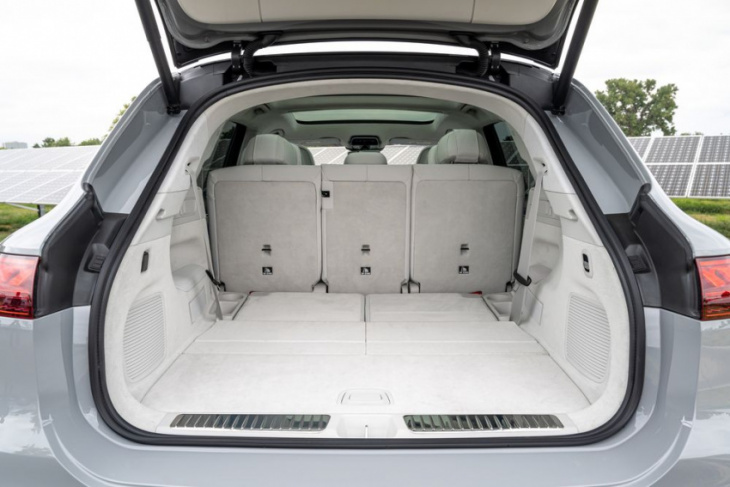 While the less expensive gas-burning GLS-class offers greater cargo volumes and can tow significantly more—7700 pounds versus the EV’s 3500—the EQS SUV is far more versatile than its sedan sibling. That its styling is more suburban than science fiction may be an additional draw for some. A tradeoff is that the current limitations of charging on the go will further complicate the family road trips that this utility vehicle was designed for, so plan accordingly when heading to Walley World. But considering how much more Mercedes you get for the same outlay as the four-door, this SUV is the most compelling EQS yet.

Keyword: 2023 Mercedes-Benz EQS SUV: An EQ for the Whole Family

Buyers of Mercedes-Benz’s fully electric EQ range of cars will be given an increasingly long list of functions denied them, at least in the USA. This time it’s something called Acceleration Increase, a USD $1,200 (RM5,345) annual subscription. Locking features or abilities already built into cars unless more money is ...

Mercedes-AMG A35 “Edition 55”. Are the regular Mercedes-AMG models no longer doing it for you? Find yourself looking out for something more distinctive still? Perhaps this might just be what you’ve been looking for. Mercedes-AMG is now opening registrations of interest for the first “55 Edition” models here. Built ...